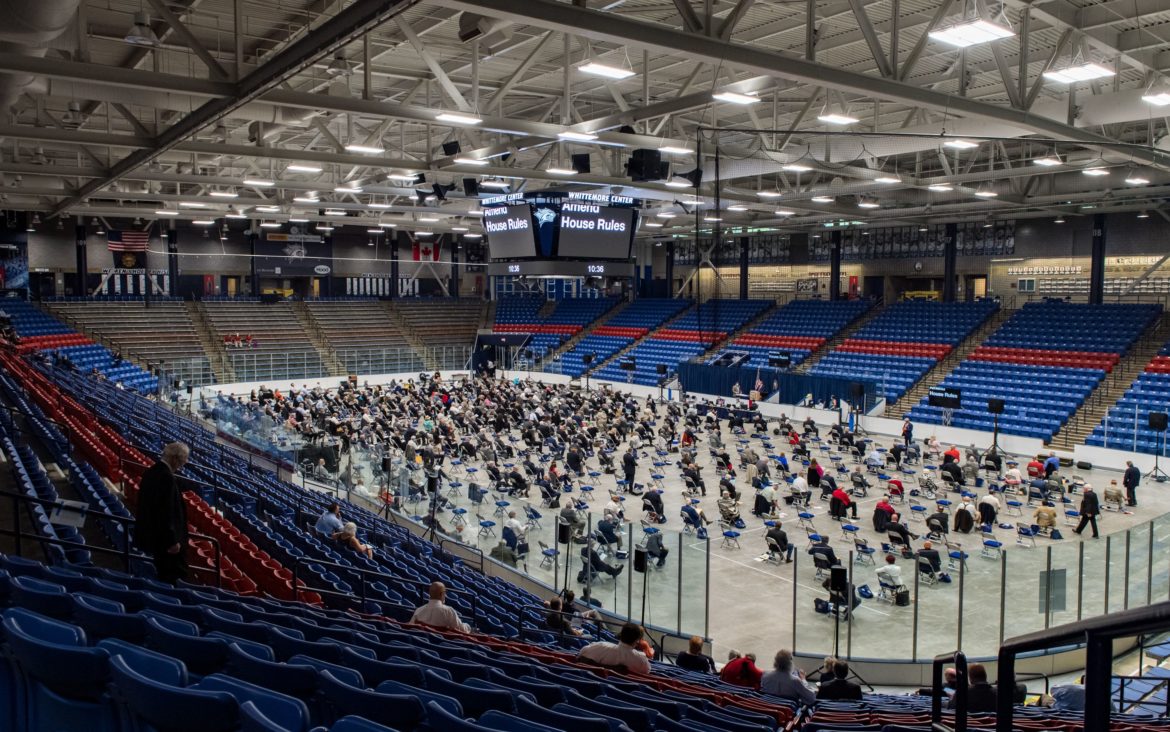 NH House members met at the Whittemore Center in Durham on June 11 to observe social distancing.

CONCORD — From increasing the minimum wage to allowing more small, renewable energy producers to sell electricity to utilities, lawmakers will have a final chance Wednesday to put their stamp on the tumultuous 2020 legislative session.

The House meets at 10 a.m. at the Whittemore Center on the University of New Hampshire’s Durham campus, while the Senate meets in Representatives Hall at noon to attempt to override Gov. Chris Sununu’s 22 vetoes, or more than a third of the legislation sent to his desk in the truncated session impacted by the coronavirus pandemic.

Democrats hold a majority in both the House and Senate, but do not have enough members for the two-thirds majority needed to override a veto. Consequently, there is only a very slim chance any of the vetoed bills will become law Wednesday.

Legislative action was halted in March due to the pandemic and did not resume for two months, and then partisan bickering and maneuvering prevented the House from acting on the remaining bills without a two-thirds majority.

The Senate however combined a number of key bills this session and created omnibus House bills that only needed a majority vote for the House to concur with the Senate’s action to salvage some of lawmakers’ work.

Sununu vetoed a record 57 bills last session, and the 22 vetoes this session is the second highest number ever.

Sununu vetoed a number of bills that constituted the Democrats’ agenda this session.

Sununu called the bill an income tax, although it is more like an insurance premium for workers to help pay for their health insurance.

Popular with state residents, Democrats say with the state’s high healthcare costs — and in light of the COVID-19 pandemic —  paid family and medical leave is needed now more than ever.

The bill would have raised New Hampshire’s minimum wage from $7.25 an hour to $12 over three years.

New Hampshire tracks the federal minimum wage and has the lowest rate in New England.

But Sununu said in vetoing the bill, it is absolutely the wrong time to increase wages as the economy is coming out of the COVID-19 induced economic recession.

The bill would have created an independent commission to redraw the state’s political boundaries, which is done every 10 years. Lawmakers would have to give final approval under the bill, but Sununu claims it violates the state constitution requiring lawmakers to redraw the boundaries.

The bill is intended to end the gerrymandering of House, Senate and Executive Council districts to benefit the majority party.

Sununu vetoed a bill that would have made permanent some of the changes approved for voting this year during the pandemic such as absentee balloting on demand. The Senate approved an omnibus bill that included a number of other changes to election laws.

The bill would have instituted automatic voter registration when a person applies for a driver’s license or photo ID or changes personal information.

Sununu vetoed two bills concerning the state’s renewable energy portfolio which electric utilities are required to follow: one would expand the program to allow more sources and the other would change the state’s standards to increase the renewable energy in the power generating mix.

Sununu also vetoed two bills that would allow renewable energy producers to sell their excess power to utilities. The Senate has already overridden the governor’s veto of Senate Bill 159, which expands the upper limit on generators from 1 to 5 megawatts, allowing towns and other larger, small producers to participate. The House will attempt to override on Wednesday.

The other makes several changes in the existing program and also allows for larger small producers to participate.

Sununu vetoed a bill that would allow the proceeds from the annual auction to be used for energy efficiency grants as the program originally was set up. Currently the proceeds are used to rebate money to ratepayers.

An omnibus bill that would have provided greater unemployment benefits, a death benefit for families of public workers killed doing their jobs, required the state to follow federal Occupational Safety and Health Administration requirements, and increased the time firefighters would have to claim workers’ compensation for heart and lung damage.

Sununu also vetoed a bill sponsored by his Democratic opponent in the gubernatorial race, Senate Majority Leader Dan Feltes, that would have extended a moratorium on evictions and foreclosures to allow renters and landlords and homeowners and banks to rework payment plans.

A bill that would have required companies producing toxic substances to medically monitor people at risk of exposure. The bill was aimed at producers of PFOAs.

Also vetoed was a bill that would have established an adult dental coverage program under Medicaid. The program currently covers children, but not adults.

The bill would have established extreme protective orders intended to reduce suicides and mass killings, by establishing a civil procedure to remove firearms and ammunition from someone who is at risk of harming him or herself or others.

The legislation is similar to laws in 19 states and the District of Columbia, but opponents and Sununu in his veto message said the bill would trample on the constitutional rights of individuals on hearsay evidence, without due process, particularly gun rights.

And Sununu vetoed bills that would make it easier to unionize workers, and commute sentences for drug violations particular for marijuana offenses before the state decriminalized simple possession of small quantities.