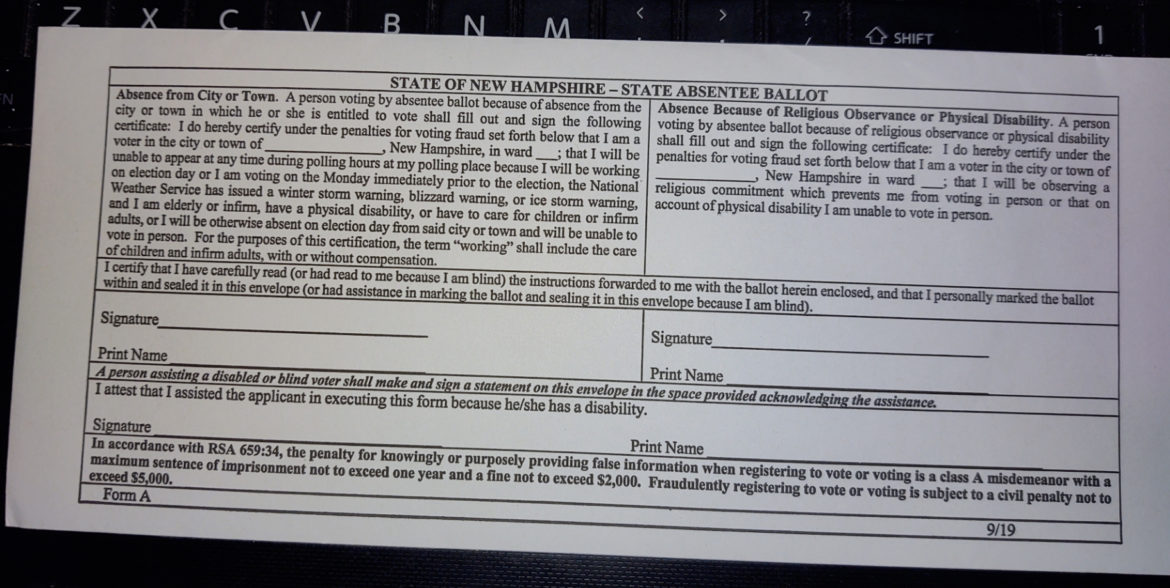 The affidavit envelope mailed to Wanda Duryea in Farmington that doesn't include COVID-19 as a reason for voting absentee.

A Dover man said he got a second absentee ballot request from the NH GOP Friday with the wrong address to return it to. And a Farmington woman received an official mailing Saturday from her town clerk that contains erroneous information she fears could land her in jail for perjury.

Although New Hampshire voters have an expanded one-time opportunity to request an absentee ballot if they fear COVID-19 as a reason to vote absentee, mailers from the NH GOP and now from at least one town clerk have created confusion over absentee voting in many homes.

These new mailers are in addition to the ones the NH GOP sent out earlier this month that would have returned the absentee ballot requests to the wrong town of Durham.

“This is getting to be really scary for voters in New Hampshire,” said Wanda Duryea, a Farmington resident who is registered Independent.

Because of health issues, she would prefer to mail in her ballot for the primary and general elections, but worries her vote won’t count because of what she perceives as the chaos surrounding the absentee ballot voting mailers and now the wrong information from her town clerk.

“I would be lying if I signed it,” Duryea said of the affidavit she received from her town clerk, concerned that she could be guilty of perjury.

The mailer from the Farmington town clerk included the old affidavit listing reasons for voting absentee and doesn’t list COVID-19 as one of the reasons, Duryea said. Also, a sticky note from the town clerk says to include both ballots in the return envelope but only sent one ballot for the state elections, not a second one.

“If I vote in person I risk COVID-19. If I don’t vote, President Trump’s policies risk my life and if I vote by mail and they don’t count it my life is likewise in jeopardy,” Duryea said.

Duryea said she has already signed a request for absentee ballot saying: “I am unable to vote in person due to a disability or concern for the novel
coronavirus (COVID-19)…”

Shortly after this story posted Saturday, Duryea received an email response from her town clerk Becky Dickie that said:

“Wanda, per the Secretary of State, anyone requesting an Absentee Ballot for Covid shall sign the Disability side of the Affidavit Envelope for this Election. Was there not a Yellow Folded School Ballot in your envelope with 1 question on it too?
Best regards, Becky”

Duryea said she noticed after receiving Dickie’s email response that there was what appeared to be a yellow flier with a question about the school budget. But she was still upset about the affidavit.

“So now, everyone has to perjure themselves because they won’t print new affidavit envelopes,” Duryea said.

Software developer Brian LaPierre of Dover received another absentee ballot request form from the NH GOP – this one for the general election – with an incorrect address to return the request, this one to Exeter. He received it on Friday.

“I live in Dover and the form would have been mailed to Exeter,” LaPierre said, adding he considers the confusion a very important matter.

Attempts to reach NH GOP chairman Stephen Stepanek were unsuccessful.  No one responded to an email sent to the NH GOP.

On Friday, Associate Attorney General Anne Edwards sent reporters the actions taken by her office about the original primary mailing by the NH GOP in which the return address for the absentee primary ballot requests was Durham. But she was unaware of the second NH GOP mailer for the general election that lists Exeter for Brian LaPierre who lives in Dover or the official one from the Farmington town clerk until informed by InDepthNH.org.

When contacted by InDepthNH.org about Brian LaPierre’s second mailing, Edwards said, “It is a different set of mailers sent out for the General Election. Right now, we are reviewing the mailer and I’m going to speak with Mr. LaPierre.”

A right-to-know request was filed by InDepthNH.org reporter Catherine McLaughlin seeking all records in the attorney general’s investigation into the first round of mailers by the NH GOP. On Friday, the Attorney General’s Office responded that it would take until Sept. 21 to review the documents to determine what could be produced.

LaPierre said he would be happy to talk with Edwards. The mailers went to him as the resident because the person whose name is listed on the mailers doesn’t live there. LaPierre said he is a registered Independent who is very concerned about the confusion being created around absentee ballots.

Wanda Duryea of Farmington takes the problems with the absentee ballot requests very seriously, too.

“Our whole democracy is on the line and America is more divided than ever in our history,” Duryea said.

“There is no good answer for me.”