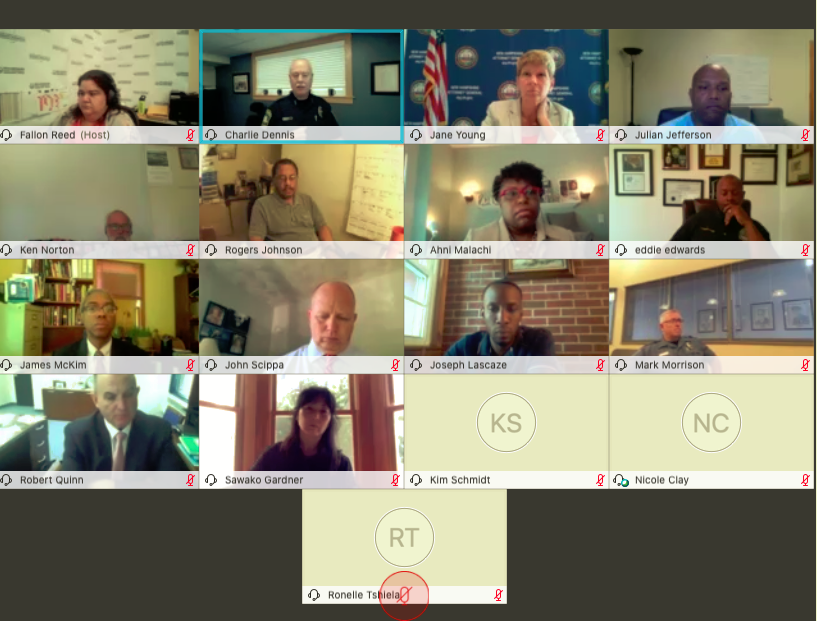 Screen shot of members of the Commission on Law Enforcement Accountability, Community and Transparency remote meeting on Friday.

Members of the New Hampshire Commission on Law Enforcement Accountability, Community and Transparency voted to send their first report to Gov. Chris Sununu on Friday, with more reports coming by the end of August.

The commission, created by Sununu in the wake of national protests over deadly police misconduct, sent Sununu a list of recommendations on how to better train police as part of the first report, but only after pushing back the ambitious deadlines.

“What we’re trying to accomplish here can be accomplished, but tight time-tables and strict mandates … It’s really making this into a very challenging thing,” said John Scippa, executive director of the New Hampshire Police Standards and Training Council.

The commission is requiring that the council add training time for academy recruits and current police officers on topics such as implicit bias and diversity, ethics, and de-escalation. According to the original draft, Scippa would need to start submitting changes to the Office of Legislative Services by Sept. 15, a date that many on the commission did not see as achievable.

“We want to make recommendations that are realistic so that they bear fruit at the end of the process,” said Jane Young, deputy Attorney General and commission chair. “We need to be solid in our recommendations.”

Judge Sawako Gardner called the Sept. 15 deadline nearly impossible and suggested allowing Scippa to enact the training changes incrementally over a three-year period. Instead, the commission voted to push back the date to start the rule change process to Feb. 1 of 2021, allowing Scippa several months to prepare with members of the Police Standards and Training Council.

The commission is now set to begin work on dealing with the other charges it was given by Sununu, looking at the way police departments relate to the communities they serve, and how police misconduct is handled. Young said the commission will meet three times a week in order to push through and have reports on both topics done by the end of August.