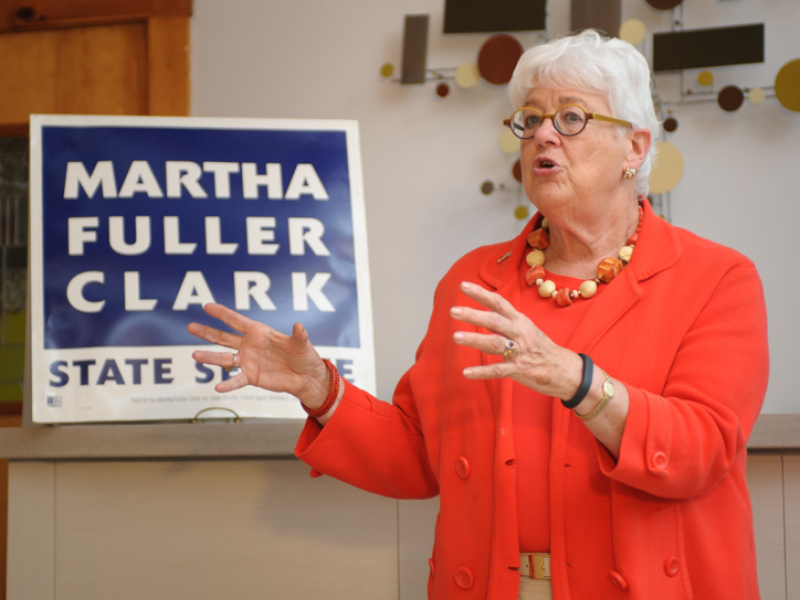 PORTSMOUTH – Portsmouth officials gathered Thursday electronically to speak against Gov. Chris Sununu allowing President Donald Trump to hold a rally in the Seacoast city last Saturday. It was cancelled and is expected to be rescheduled.

State Sen. Martha Fuller Clark, D-Portsmouth, Laurie McCray, Chair of the Portsmouth Democratic Committee and former nurse, and Joan Jacobs, a retired public heath analyst at the New Hampshire Department of Health and Human Services, each said that Sununu had put the health and safety of Portsmouth residents, businesses, and Granite Staters at large at risk by not imposing more strict COVID-19 precautions on the event.

Fuller Clark, McCray, and Jacobs noted the spike in cases that occurred in Tulsa, Okla. after the President’s rally there last month as evidence of the “superspreader” risk posed by such an event. “We cannot afford that risk, though it is one that Trump and Sununu were willing to take,” said Fuller Clark. The Senator and her husband both tested positive for COVID-19 in early spring but have recovered fully. She warned against taking the hardship of the virus lightly. “We know how dangerous this is,” Fuller Clark said.

At a July 7th press conference, following the announcement of the July 11th event and before its postponement, Sununu said he would not enforce a mask rule or social distancing, though under his “Safer At Home” advisory, all were encouraged to practice both precautions.

Citing the continued surge in cases nationwide and the distinct dangers to New Hampshire’s small business community and proportionally high number of long-term care residents impacted by the ongoing pandemic, McCray said that Sununu had put political priorities ahead of the security of his constituents. She noted that Portsmouth businesses especially were put at risk by not mandating masks by attendees, especially those from out of state.

When pressed last week on the potential heightened risk at this event from out-of-state attendees and crowd size in the thousands, Sununu said the rally would face the same safety rules imposed on other political gatherings in the months since COVID-19 struck New Hampshire. “Whether it is a campaign event or protest on the State House lawn to reopen New Hampshire, whatever it is, we have never said no to those events. We have always held everyone to the exact same standard,” he said.

Sununu echoed those sentiments at his press conference on Thursday. He responded to the comments by Portsmouth officials by accusing them of holding a different standard to the Trump event because they disagree with it politically. “We can’t be in the business of picking and choosing, based on our political whims what events we are going to have,” Sununu said.

State health officials said last week that they had not identified any positive cases linked to large political gatherings such as the Black Lives Matter protests and anti-lockdown protests during the last few months.

Sununu said last week that he would not attend the rally, but would, wearing a mask, greet the President as he arrived. “I will not put myself in the middle of a crowd of thousands of people,” he said.

On Thursday, Sununu said he hasn’t heard from the Trump campaign when the rally will be re-scheduled.

Fuller Clark said, “Sununu was willing to let Trump play by different rules,” because he would not ask the President to wear a mask when he advises all Granite Staters to do so and wears one himself.