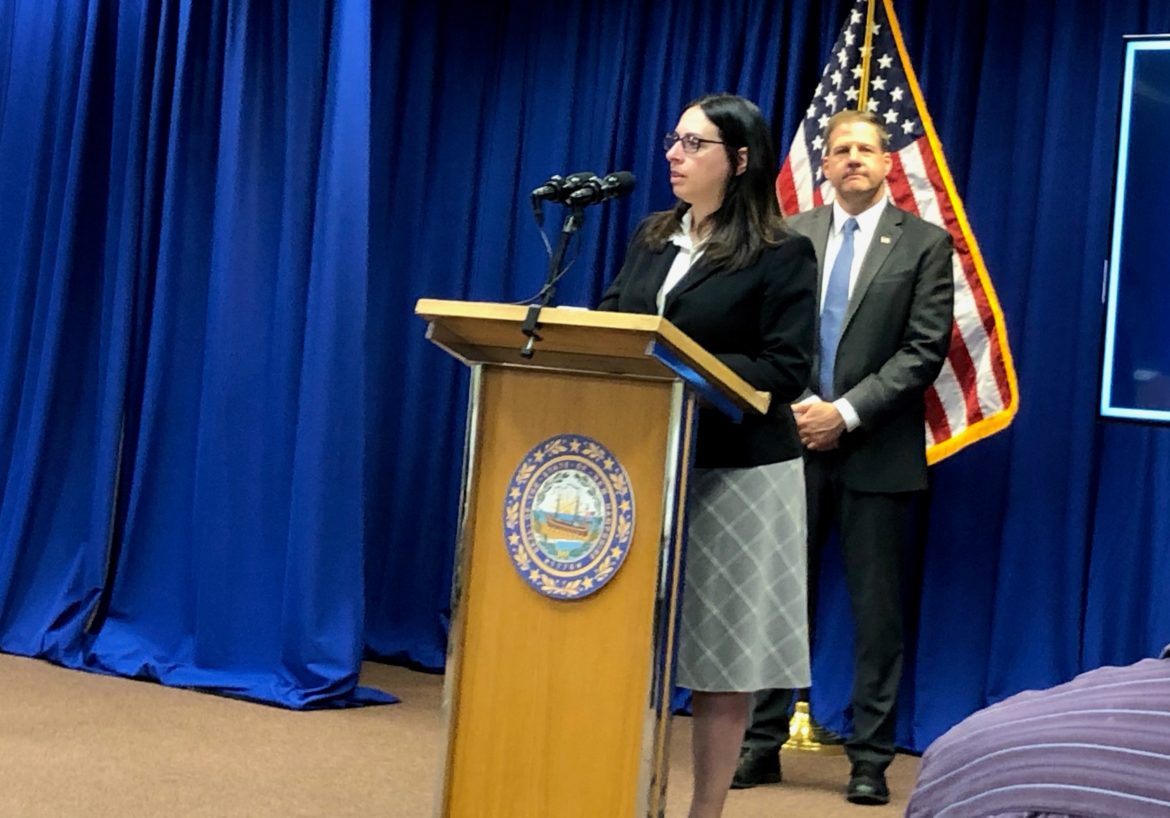 Health and Human Services Commissioner Lori Shibinette is pictured at Tuesday's news conference with Gov. Chris Sununu behind her.

CONCORD –  Gov. Chris Sununu announced Tuesday that more than 5,000 Main Street businesses will get an average grant of $60,000 in federal COVID-19 relief funds, a new fund will be created for the self-employed and he called for a 45-day study of police practices.

As the state continues to see a decline in community transmission for the virus, state officials said that as soon as this weekend, people can go visit their loved ones at long-term care facilities throughout the state.

The far-reaching press conference also touched on labor relations with the State Employees Associations in which the governor blamed “union bosses” for preventing raises prior to the pandemic.

Dr. Benjamin Chan, state epidemiologist noted that the trend for the state continues to look good, though he urged people to wear face coverings in public, noting that more than 20 states are seeing spikes in new cases of the highly transmissible respiratory virus that closed the state in March. By the end of this month, he said all businesses in the state will be able to be open in some form or another.

Six New Deaths
There were 27 new confirmed COVID-19 cases in the state and six deaths reported on Tuesday, totaling 326 with four of the six new deaths at long-term care centers. Worldwide, there are now 8 million cases and 2.1 in the United States.

The state has also passed the 100,000 mark for the number of tests for COVID-19 an average of 1,700 tests per day and the percent of people testing positive continues to decrease and is now hovering between three and two percent, Chan said.

“Overall, we are in a good trend,” he said, “however, we do remain at risk for new infections and a surge,” he said, noting that “this is being watched very closely.” Face masks are being recognized, more and more, as a way to prevent transmission, he said.
He urged people to wear masks, wash hands, and practice good hygiene and suggested people carry personal bottles of sanitizer.

This new commission is charged with “developing recommendations for reforms that the Commission deems necessary to enhance transparency, accountability, and community relations in law enforcement. To fulfill this charge, the Commission will examine police training, relationships between law enforcement and the communities, and potential steps that can be taken to enhance these relationships.

“This is not an issue where we want long and drawn out study…” Sununu told reporters. It is “an issue where we need to act now” in light of public outcry over the death of George Floyd, a black man who died in the custody of a white police officer in Minneapolis on Memorial Day weekend.

“I am not one to wait for a crisis,” Sununu said. “I am asking the commission to engage with community stakeholders….to really come up with some concrete recommendations” for reforms. He said his measure has the backing of union and others.

“The fact that everyone wants to be part of the process…really makes me know we can get to where we want to be,” he said.
The governor said he supports the release of names of police officers on the so-called “Laurie List,” as long as those officers have had due process.

Labor Relations
The governor was asked about an update on negotiations with the State Employees Association whose members have gone almost a year without a contract.
The governor said his biggest frustrations is with “union bosses.”

Given the fact that the state now has more than 100,000 unemployed due to COVID-19, the union bosses are “completely out of touch.” He said the legislature offered $6 million in raises, he offered $8 million and the union said “no,” he said. That was before the pandemic.

Lori Shibinette, commissioner of the state Department of Health and Human Services, gave a long-term care facility update and noted that all the nursing homes without a COVID-19 outbreak are free to develop plans to allow for outdoor visitation which may begin as early as this weekend.

She also noted that the state was removing Graystone Farm at Salem from the list of long-term care facilities facing an outbreak of three or more cases of coronavirus and adding Holy Cross Healthcare in Manchester to the list with 10 residents and three staff testing positive.

The visitation guidelines announced Tuesday “really acknowledge the psycho-social value” of visitation and also acknowledge safety issues related to exposing the elderly to the virus. More than 80 percent of all deaths from the virus in the state involve residents of long-term care.

She said each facility will develop its own guidelines but they will all involve maintaining a safe distance, the wearing of masks, outdoors in a designated area, no physical contact, and a supervisor.

There will be health screening prior to the visit but Shibinette said COVID-19 testing would not be necessary.
“We don’t want them to rush into this,” she said of long-term facilities.

Sununu also noted that the state is still working on the difficult issue of opening up Adult Care Centers for the elderly, calling it “very challenging,” but very important for socialization.

Calling it “a pivotal moment that demands prompt action” in the nation related to race relations and law enforcement, Sununu said he signed an executive order creating the Commission on Law Enforcement Accountability, Community, and Transparency.
It calls for a report within 45 days on meaningful reform the state can take to improve “to initiate important conversations and develop recommendations for reform” of police procedures.

“The state has an obligation to participate in the national conversation and engage in self-examination to identify any opportunities to improve the state of our law enforcement,” he said.

Sununu announced that 5,466 grants have been approved for $400 million in the Main Street relief fund through the federal CARES ACT and that the money could be going out the door as early as the end of this week.
He noted that in pre-qualification applications there were 13,075 but that was because 4,742 were self-employed, which was a disqualifier.

That highlighted the fact there is a lot of help needed out there, he said, in announcing he will create a new fund for the self-employed. A total of $338,374 will go to the Main Street businesses approved, with income less than $20 million a year.
He said that the money will average 17 percent of their losses covered.

The average grant will be $61,905 to pay some of the bills, noting the closures due to the pandemic. Sununu said he would be working to finalize a program for self-employed in the coming days though he did not specify the amount of the grant program.
There is at least $600,000 left from the Main Street program that could be tapped, he noted.

Sununu said he went out to dine with his family this weekend in Epping and he was surprised to see a sign requiring masks for everyone who comes in. “My message to the state is to be worried,” about the virus, saying it is still out there.
What they can do to protect and prevent is “wear a mask.”