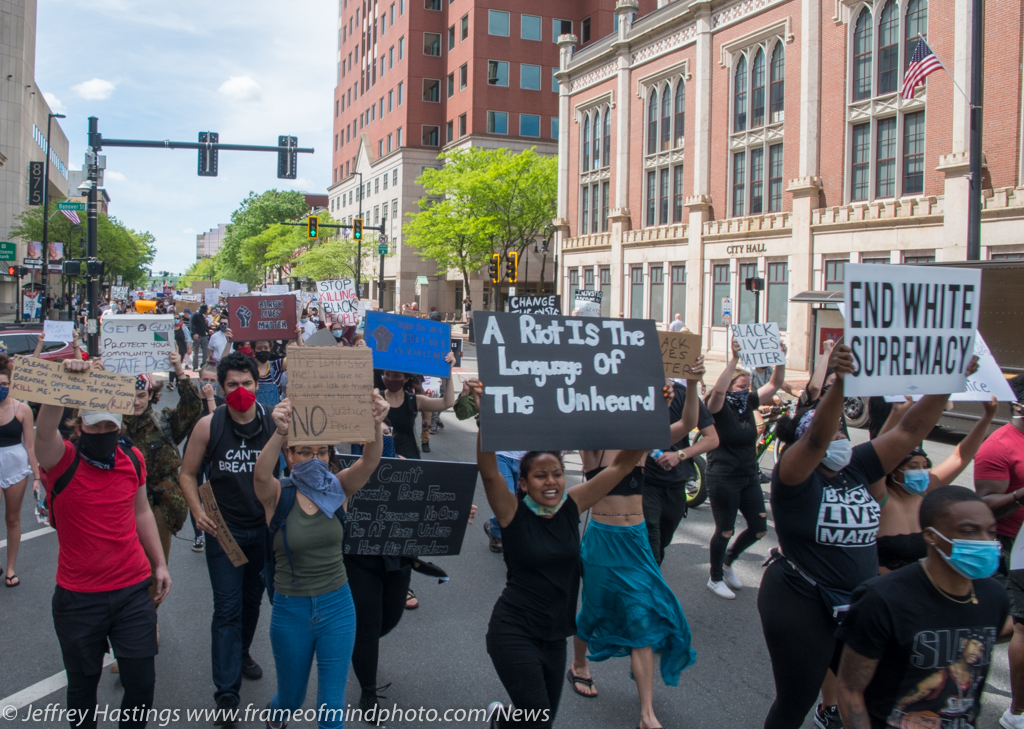 Editor’s note: Manchester Police Department Spokesman Heather Hamel said the demonstration was peaceful and people were very respectful of each other. After the protest about 100 people marched to the police station. At about 1:30 a truck drove up and the occupants and the protesters had a verbal altercation. In a nearby parking lot one of the occupants of the truck got out and displayed a gun. Manchester police officers took that individual and one other into custody. The individuals are being booked and their identities will be released later.

MANCHESTER — More than 1,000 people took to the streets Saturday morning as part of a peaceful protest against the killings of unarmed black men around the country.

“We plan to stand in solidarity with the people who are assassinated in our country,” said Tyrell Whitted, a Manchester resident and one of the march organizers with Black Lives Matter.

The nation is being rocked by the May 25 death of George Floyd in Minneapolis seemingly at the hands of police, and the resulting protests – and in some cases riots. Four Minneapolis police officers involved in the arrest have been fired. One of them, Derek Chauvin was arrested and charged Friday with third-degree murder and second-degree manslaughter in Floyd’s death.

“I believe that when justice isn’t served the people are going to react,” Whitted said.

People started gathering at Veteran’s Memorial Park Saturday morning ahead of the march, ready with signs, and the ever-present face masks to help curb the spread of COVID-19. By and large, the marchers want to see change following the death of Floyd and others, including another recent victim, Ahmaud Arbery.

In February, Arbery, an African-American, was chased down by two white men, a father and son, and shot to death. The killing took place in February, but no arrests were made until after a video of the incident leaked to the press months later.

“I’m so outraged I can’t even articulate my anger,” said Carla Giorgi or Manchester.

Giorgi, a white woman raising an African American son, said she fears for her child’s life as he grows up in America, given the violence African Americans are subject to. Giorgi’s friend, Helena Laquinta, of Nashua, said white people have a responsibility to minorities to end the racial injustices that are killing them.

“We built this systemic racism, so we have to be the ones who change it,” Laquinta said.

India Barrows, a Manchester resident and an African American, said the country needs to stop harming minorities. The violence and discrimination minorities face from civil authorities in New Hampshire is a long-standing problem, she said.

“This has been happening since I was 18,” Barrows said.

James McKim, president of the Manchester chapter of the NAACP, attended the march to support the Black Lives Matter movement.

“We have to talk about the scourge of racism and discrimination in this country,” McKim said.

McKim said that while race relations in New Hampshire are good overall, racism is real and it does lasting harm. He’s currently dealing with officials involved in Albany where two New Hampshire State Troopers were caught on video smashing into the car of Jean Saint Preux, an African American, and pulling him out of his vehicle by his dreadlocks. McKim said he’s spoken with police and FBI agents about that case.

McKim said the problem stems from people not seeing the full human dignity in other people, and then treating them as less than human.

“Many people don’t see others as individuals,” McKim said.

Minneapolis Police Officer Derek Chauvin was captured on video with his knee on Floyd’s neck during an arrest as Floyd can be heard begging for air. Floyd later died and it took authorities in Minneapolis days to arrest Chauvin and charge him with third-degree murder.

Saturday’s march had protestors headed down Elm Street past City Hall chanting “No Justice, No Peace,” “Black Lives Matter,” and “Hands Up, Don’t Shoot,” among other refrains. The march and rally afterward were peaceful, with Manchester police providing traffic control to clear the road for marchers.

“This morning I called the organizers ahead of the George Floyd March in Manchester to let them know the State of New Hampshire stands with them in their calls for justice,” said Gov. Chris Sununu. “This important conversation must continue and we must constructively work together as a nation to ensure there is change.”

Manchester Police Chief Carl Capano is seen on the video engaging with the protestors and talking about Floyd’s death.