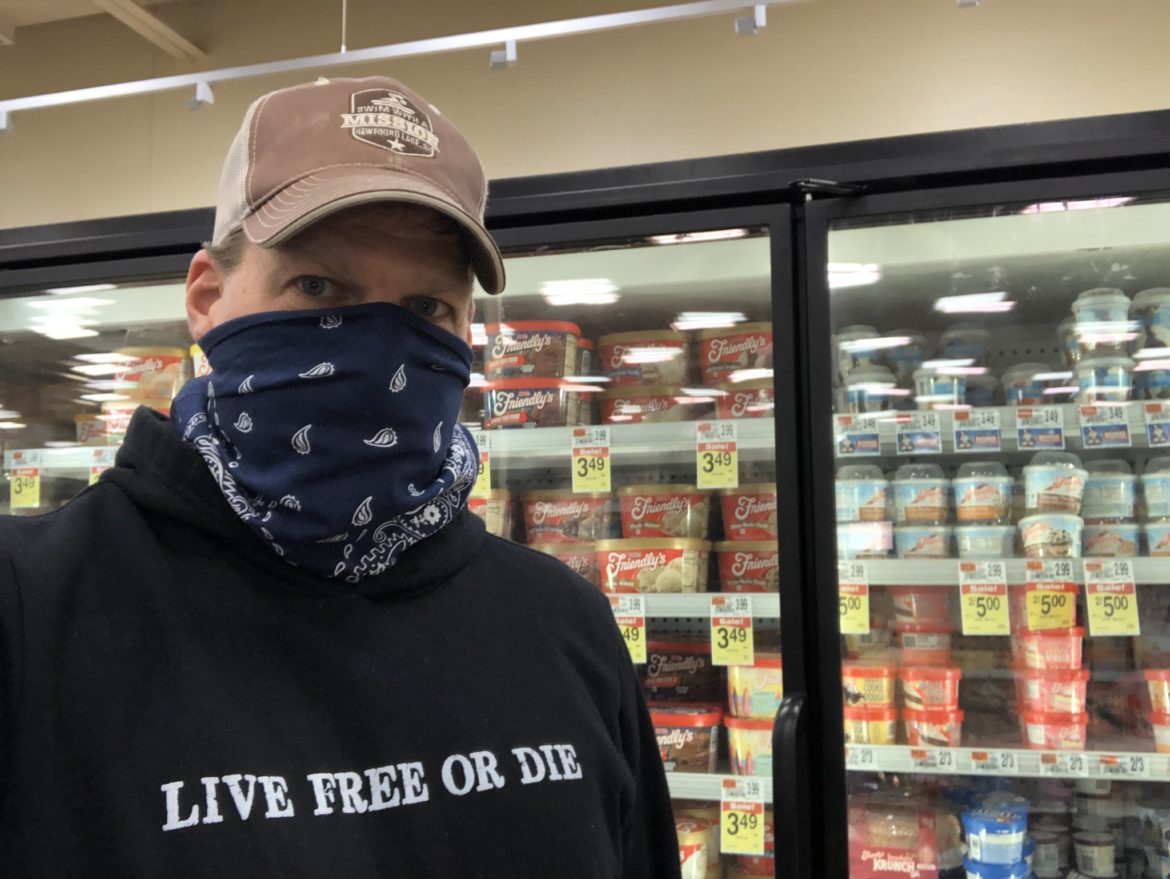 Gov. Chris Sununu posted this photo on Twitter of him in front of an ice cream freezer at a grocery store in July.

Local scientists who have urged Gov. Chris Sununu to mandate face coverings for almost two months believe lives could have been saved and more saved going forward except that Sununu ignores their advice even though Maine, Massachusetts and New York have issued mandatory mask orders.

“Lives definitely could have been saved,” said Rich DiPentima, who retired after serving top public health posts in the state and Manchester, including several stints as the acting state epidemiologist.

He is a member of the New Hampshire Science and Public Health Task Force that has been advocating for mandatory face masks since early April.

The state estimates about 77 percent of all COVID-19 deaths in New Hampshire, about 214 in all, are in long-term care facilities, the highest percentage in the country.

While closing nursing homes to visitors was one of the first steps Sununu took in March when announcing the pandemic, it was two months before the state announced a testing program for nursing home residents and staff and that still hasn’t been fully implemented.

Nursing home testing should have started day one, DiPentima said, acknowledging the state’s difficulty in getting enough test kits all along to test as needed.

DiPentima said mandating wearing face coverings at indoor locations such as grocery stores and liquor stores would go a long way to ending community transmission. That would also help eliminate infections in places where social distancing is difficult if not impossible such as long-term care facilities, prisons and jails, and businesses such as meat packing plants.

The state prison for men in Concord on Wednesday announced its first resident testing positive for COVID-19 and two residents previously tested positive at the Strafford County House of Corrections in Dover.

“The only reason I can see is people are afraid of getting political backlash from the live-free-or-die people who say the government can’t tell me what to do in a nanny state,” DiPentima said.

Sununu has been steadfast saying a mask order isn’t necessary in New Hampshire, although he recommends wearing them and says most people wear them.

At Tuesday’s press conference, a reporter asked Sununu why face masks have become so political.

He said he doesn’t know why it has become so political.

At the news conference, Health and Human Services Commissioner Lori Shibinette said community transmission remains a problem for people in long-term care facilities. She has said in the past it would be impossible to test everyone working at nursing homes every day or the whole day would be spent on testing.

Sununu said people working in retail stores with customers face-to-face or working in restaurants will be mandated to wear a mask.

“Just walking down the street or sidewalk or going for a hike, we’re not at the point we have to mandate masks. I know Massachusetts did it. We don’t have that rate of transmission,” Sununu said.

On April 8, Sununu posted a photo of himself on Twitter wearing a bandana in front of a grocery store ice cream freezer with a fun quiz:

DiPentima said as the state reopens more businesses, it is important for people to feel safe going out and a mandatory mask order would help. Some cities have already implemented their own mask orders.

In Salem, all essential businesses, healthcare facilities and any other establishment that is open to the public requires all those entering the business to wear a face covering mask.

In Nashua the general public is required to wear face coverings in situations where they cannot maintain social distancing (six feet of distance between themselves and others).

“The science is very clear on masks,” Traviss said. She encouraged people to go to the website: www.endcoronavirus.org for more detail.

“Masks are recommended for indoor public places.  If 80% of all of us wear a mask that is only 50% effective (like cloth masks) then we could extinguish transmission of the virus,” Traviss said.

“The benefit is preventing source spreading, and the benefit happens at community level, not any one person,” Traviss said.

DiPentima said it is imperative to look at the science, not the politics. The face coverings protect other people from the wearer’s virus, even if they are asymptomatic.

Face coverings are virtually free, self-administered and have no side effects, he said.

“If you want to play games and say we’re not going to do it, we know more than the virus, go ahead,” DiPentima said.

“The virus is going to do what it’s going to do regardless. As human beings, we need to try and think how we can outsmart the virus,” DiPentima said.