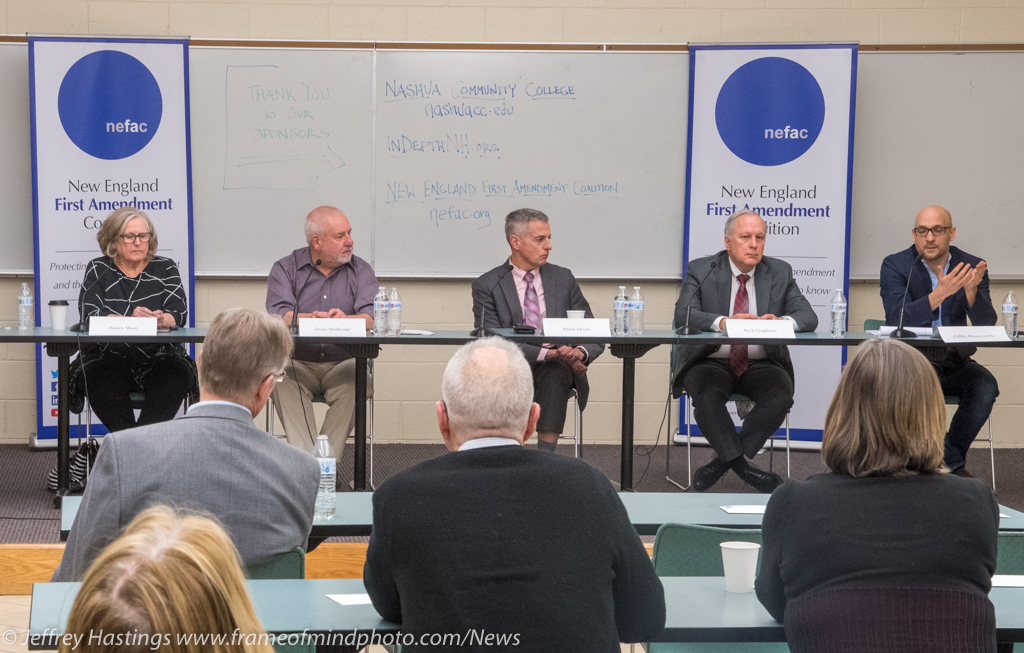 CONCORD – Better than it has sometimes been in the past, but still a ways to go with some important decisions about its future soon to be made by the state Supreme Court.

That’s how a panel celebrating Sunshine Week summed up the state of the state of New Hampshire’s right-to-know law, RSA 91:a, Tuesday evening at a public forum at Nashua Community College. Sunshine Week celebrates public records laws across the country.

Rick Gagliuso, an attorney with Bernstein Shur in Manchester, spoke about the history of his First Amendment work for news outlets since the 1980s holding government agencies accountable to release public records and hold legal, open meetings.

The heyday for right-to-know awareness was during the 2000s when newspapers could afford to pay attorneys to bring court cases when they were refused public records. Having to defend their actions in court got the attention of government officials, Gagliuso said.

“It seemed to have an educational function as well,” to sensitize them to the importance of following the right-to-know law.

“It let them know that someone was watching, somebody’s paying attention,” Gagliuso said. Agencies, cities and towns began to pay more attention, he said, until newspapers could no longer afford to go to Superior Court or the state Supreme Court, the only recourse in New Hampshire when a request is denied.

“You could almost see them relax,” Gagliuso said of public officials.

Even though some newspapers are still struggling financially, some are working to make sure the court cases are fought again, largely because they have help from lawyers like him and ACLU-NH, Gagliuso said. He’s optimistic about the renewed vigor in enforcing the right-to-know law.

The event “How Transparent is NH Government and Why It Matters” was sponsored by the New England First Amendment Coalition, Nashua Community College and the New Hampshire Center for Public Interest Journalism, which publishes the nonprofit online daily InDepthNH.org. It was moderated by Sally Bashalany, chairman of the Arts, Humanities and Communications Department at Nashua Community College, and organized by Christina Forbes, campus communications specialist.

Gilles Bissonnette, legal director for ACLU-NH; Mark Doyle, New Hampshire’s director of Emergency Services and Communication, Dean Shalhoup, a veteran reporter at The Telegraph of Nashua; and Nancy West, founder of InDepthNH.org also gave their perspectives on the status of the law.

Bissonnette said about 20 percent of his work right now deals with cases that involve RSA 91:a.

Several of the cases involve an exception to the law that allows for the government to categorically withhold documents that are deemed to involve “internal personnel practices.” It is often cited by officials for withholding records because of the 1993 state Supreme Court in what is called the Fenniman decision.

But the court ruled in 2016 in a separate case that perhaps it’s time to take a hard look at the exception, that it might be bad for government accountability.

“There should be at least be some assessment as to whether the public interest in disclosure is high,” Bissonnette said.

He gave examples of cases that are before the court right now that involve the exemption. They include an arbitrator’s report about a Portsmouth police officer who was terminated after receiving $2 million from an elderly woman who had dementia. It was withheld under the internal personnel practices exemption, Bissonnette said.

Others involve an internal audit report involving the Salem Police Department and a Manchester police officer who was terminated after being accused of, but not criminally charged with coercing a woman for sex.

“It’s time to decide once and for all that that exemption needs to be narrowed,” Bissonnette said.

It’s not just police who are relying on the exemption for withholding documents, he said.

The Concord school district is “relying on this overly broad exemption” to release non-identifying portions of a 100-page report involving a teacher alleged to having had inappropriate sexual relations with a student.

“The public accountability interests are so, so high,” Bissonnette said.

Mark Doyle, director of New Hampshire Emergency Services, explained what public officials have to deal with when they get a right-to-know request.

It is a more complicated process than it looks, he said, because officials must make sure that they only release what has been requested and what is legally allowed to be public. It’s like trying to hit a moving target because the law and court precedents change over time.

“They are not set in stone,” Doyle said. “I always try to do from a government perspective, is try to be as forthcoming as we possibly can with the information. There is no reason for us to hold onto it.”

A former Merrimack police officer and chief, Doyle said there are situations that require withholding information to protect investigations and public safety.

The government also relies on their legal counsel’s advice when deciding what to release, Doyle said.

“It’s all about transparency as you’ve heard,” Doyle said. It’s also about protecting the public, he said. “We are looking out for the safety of everybody.”

Veteran journalist Dean Shalhoup, shared his experience working for 47 years at The Telegraph of Nashua.

He recalled early on having people ask him if he needed special credentials to go into court or attend government meetings. Part of his mission is to explain to people that he has no special privileges as a reporter, that the information belongs to the public. Everybody has the same access he does, Shalhoup said.

Shalhoup mentioned some of the legislation that has been brought this session that would impact the public’s right to know. Most of the ones that were opposed by the media have been tabled or killed, he said.

One would limit when the press could report the name of a mass murderer. Another would have required newspapers to update their website immediately in reported criminal cases in which the individual was found not guilty or charges were dropped. Reporters already try to do that, he said.

Nancy West provided an update on why reporters want to get as much information as possible about the spread of COVID-19 so people can protect themselves, not to try to hype or play down the outbreak. West also explained that the nonprofit news website InDepthNH.org’s mission is to help buoy news outlets across the state.

West also reminded the audience that public records belong to the people, the media is just a conduit to those records.

Justin Silverman, executive director of the New England First Amendment Coalition, also met with members of the audience before and after the forum. NEFAC is a non-partisan non-profit organization that protects the five freedoms of the First Amendment and the public’s right to know about government.

The coalition provides presentations in community centers, on campuses and in classrooms; hosts public workshops and clinics on freedom of information laws; trains journalists on the latest investigative techniques; and appears in court to defend the First Amendment rights of New Englanders. More information about NEFAC, including how to join as a sustaining member, can be found at nefac.org.

Editor’s note: Rick Gagliuso of Bernstein Shur serves on the boards of directors of the New England First Amendment Coalition and the New Hampshire Center for Public Interest Journalism.