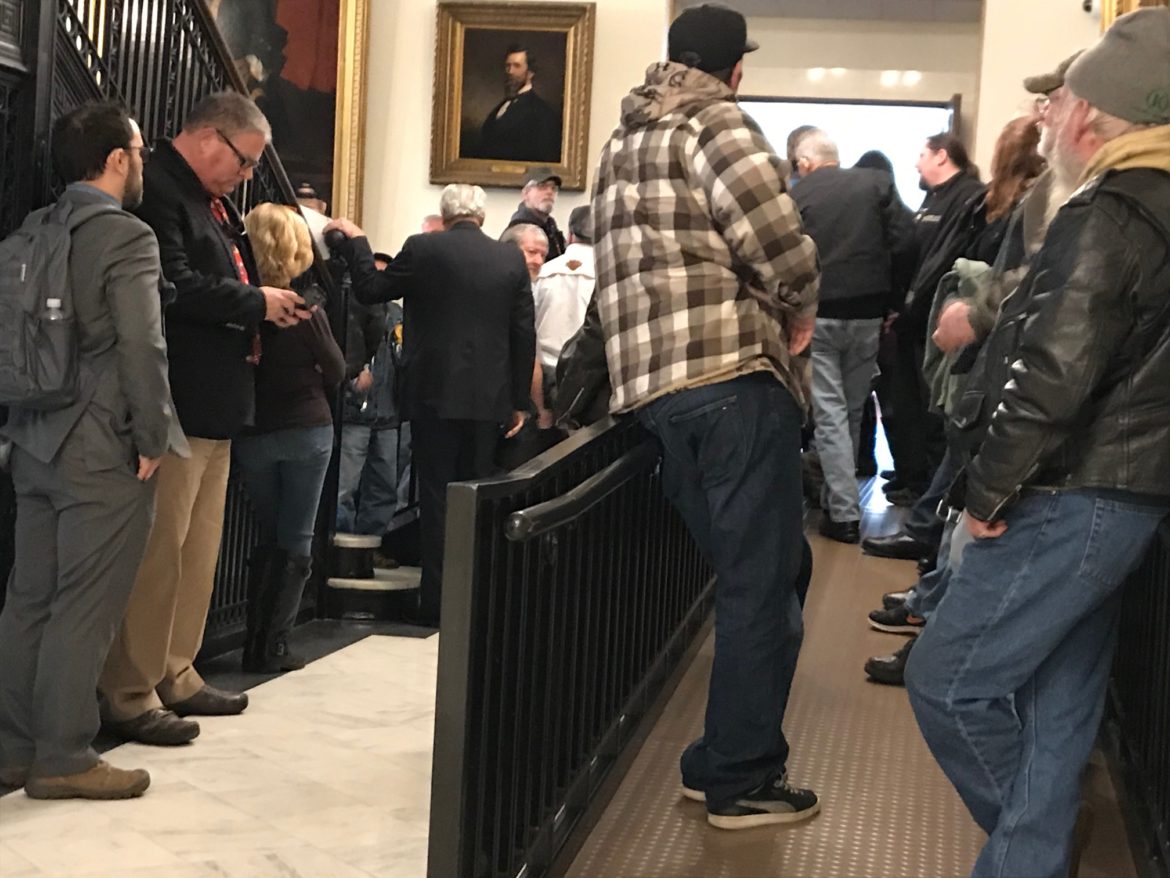 People line up to register to speak or register their position on House Bill 1621, which would mandate the use of helmets for riders and operators of motorcycles, mopeds and motorized scooters.

CONCORD — A horrific crash that took the lives of seven motorcyclists last summer and seriously injured three others in Randolph was barely mentioned at a public hearing Tuesday that drew about 300 motorcycle enthusiasts to oppose a bill mandating helmet use.

Under House Bill 1621, motorcyclists and their riders would be required to wear helmets as would those riding mopeds and motorized scooters.

Billions of dollars would be saved in economic activity and compensation if helmets were required nationwide, he said, including savings to New Hampshire taxpayers.

But he acknowledged mandatory helmet laws are a tradeoff between safety and what a person wants to do including the freedom not to wear a helmet.

“Freedom” and “choice” were two often-heard words at the public hearing Tuesday, along with the state’s motto “Live Free or Die.”

While Cleaver talked about the economic impact of head injuries and other injuries to motorcyclists, others talked about the negative impact a helmet mandate would have on tourism in New Hampshire and at the Laconia Motorcycle Week Rally, one of three national rallies held each year.

She said the rally at Daytona Florida had a drop off in attendance after Florida passed a mandatory helmet law.

“Two-thirds of our visitors come from out-of-state,” Anderson said, “and that has a tremendous impact on the state’s economy.”

Rep. Ben Baroody, D-Manchester, opposed the bill to honor a friend he made in basic training.

The two shared a passion for motorcycles, he said, and promised each other they would ride together sometime in the future.

That happened after his friend had taken a year to recover from injuries he suffered, Baroody said, and they rode for two days through Maine and New Hampshire with two of his friends.

When his friend rode away, Baroody said he knew he would never see him again.

“He died at the ripe old age of 24 years old,” Baroody said. “For John and all those who fought, and bled and died around the world for freedom, let’s not take anyone’s freedom away here today.”

“People have gone to war to fight for freedom,” he said. “We don’t need a legislative body taking our rights away.”

When he was in the legislature they called these types of bills “Nanny bills,” Boutin said.
Another former state Sen. Bob Letourneau, R-Londonderry, said he has ridden motorcycles all his life and “I’m still here.”
After he left the legislature he worked for the Department of Safety on a motorcycle safety program, he said, which has been very successful.

Berlin Mayor Paul Grenier also opposed the bill citing the state motto “Live Free or Die.”
“If this bill passes,” Grenier said, “this is what you will do to the state’s motto” as he ripped a copy of the bill in two.

Christine Corey of Manchester said wearing a helmet is a matter of choice.

“It is our choice,” she said, “those seven that died in Randolph, that was their choice.”

“My choice,” she said was the leather hat she took off her head. “What is the next bill going to be, you have to be wrapped up like the Michelin Man.”

But another bill sponsor, Rep. Jerry Knirk, D-Freedom, said the bill deals with public health and health economics, noting the primary cause of death on a motorcycle is head injuries, and traumatic brain injuries are very expensive medically.

A medical doctor, Knirk said the cost of care for those kinds of injuries are paid for by everyone who has insurance as well as taxpayers.

“In South Carolina, they had a $10 million decrease to taxpayers when they passed a helmet law,” Knirk said. According to the most recent statistics “in New Hampshire, if everyone wore a helmet, (taxpayers) would save $3.6 million in direct costs.”

The Senate Transportation Committee held a public hearing Tuesday on a bill requiring seat belt use in vehicles.

Sen. David Watters, D-Dover, is the prime sponsor of the bill.

Cleaver is also the prime sponsor of House Bill 1622, which would require the use of seat belts in any vehicle.

The public hearing for that bill is scheduled for 10 a.m. Wednesday before the House Transportation Committee in Room 203 in the Legislative Office Building.