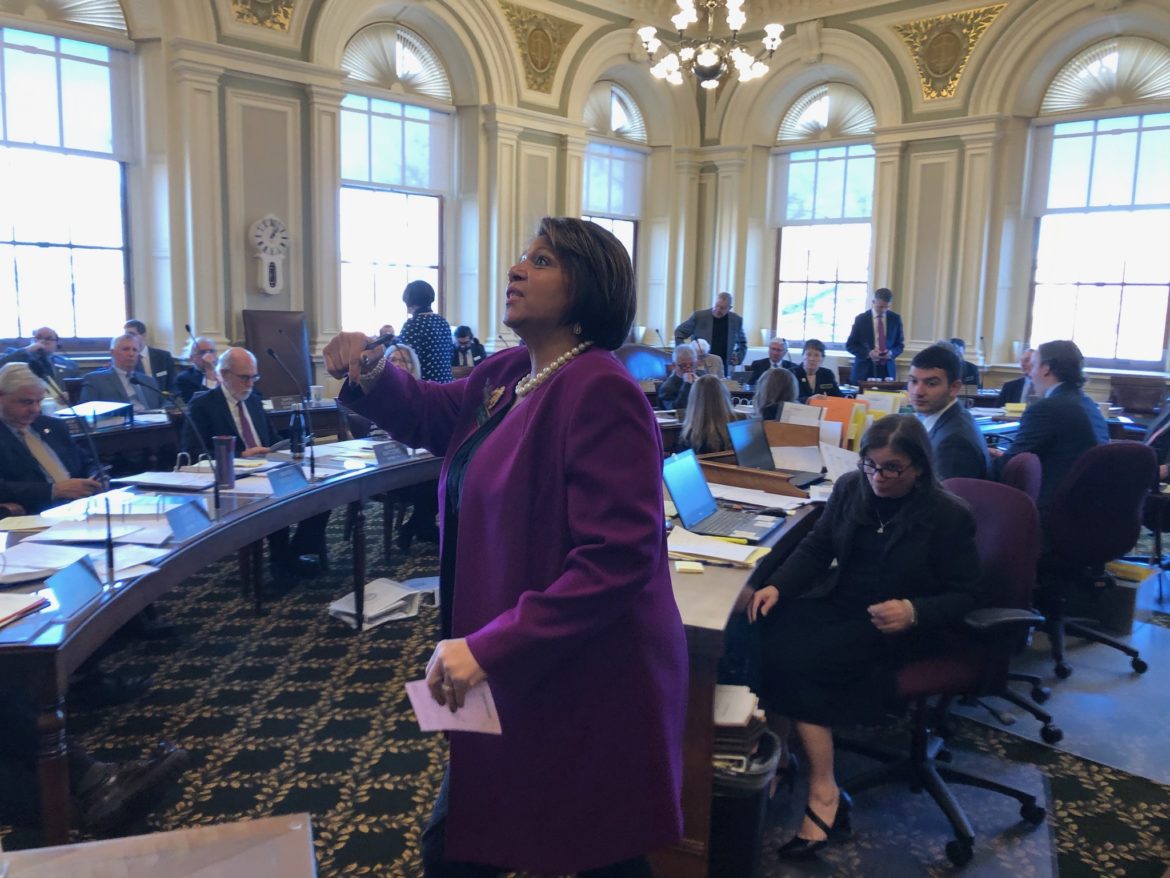 State Sen. Melanie Levesque, D-Brookline, is pictured Thursday motioning to the gallery before the afternoon session.

By PAULA TRACY, InDepthNH.org
CONCORD – The New Hampshire Senate moved decisively and unanimously to pass legislation on Thursday that will help return to school districts about $29 million in Medicaid reimbursements.

It also voted along party lines 14-10 to approve a new minimum wage. Senators also backed the naming of the Brentwood section of Route 125 as the Officer Stephen Arkell Memorial Highway in honor of a beloved fallen police officer.

And voted in favor of proclaiming Jan. 24th as “Granny D. Day.” Doris “Granny D.” Haddock was a citizen of Dublin who walked 3,200 miles across the United States to promote campaign finance reform.

State Sen. Jeb Bradley, R-Wolfeboro complimented all on the quick passage of the Medicaid to schools bill, Senate Bill 684-FN, calling it a great example of an effort where everyone got together to fix a problem. The measure will go to the House for a quick vote with the hope that it will help this year’s school billing for experts from occupational therapists to counselors.

State Sen. Jay Kahn, D-Keene said there are 171 of 176 school districts in the state that have been participating in the federal reimbursement program.

“There are school counselors, mental health counselors, speech language pathologists, and other specialized care givers who are employed by our school system and certified by the Department of Education.

“SB 684 provides a pathway for school professionals being additionally licensed by health-related professional licensing boards. We are acting on an accelerated schedule to help schools recover up to $29 million of reimbursement blocked by the Sununu administration’s emergency rules,” Kahn said.

State Sen. Dan Feltes, D-Concord, who is running for governor, asked whether the problem was created by that administrative emergency rule and whether the whole thing could have been avoided.

Kahn said there could have been another way to handle it. Republicans, however, focused on all people, including Gov. Chris Sununu, for moving the ball forward.

“Everyone rolled up their sleeves,” Bradley said.

“As a state, New Hampshire is constantly striving towards an economy that attracts and retains hard workers. We know that more money in the pockets of our employees means more money flowing back into our economy. We know that higher wages lead to greater employee retention. We know that New Hampshire should make decisions based on the economic needs of our state, not based on what comes out of Washington D.C.”

It was a unanimous vote in favor of SB 552, Sen. Jon Morgan’s bill to designate the Brentwood section of state Route 125 as Officer Stephen Arkell Memorial Highway.

Officer Arkell served the Brentwood community as a police officer for 15 years before being killed in the line of duty. Officer Arkell’s family members and colleagues were present to witness the bill’s passage through the Senate.

“As a Senate we are proud to recognize Officer Arkell’s service. As a Brentwood resident, I am honored to have this opportunity to remember Officer Arkell and grant him the public recognition a local hero deserves. It is my hope that this dedication will inspire us all to follow Officer Arkell’s example.”

“Granny D was a fierce advocate who called for honesty, transparency, and equality in politics. Her efforts to bring attention to campaign finance reform, her belief in the ideals of democracy, and her love for New Hampshire truly cement her as an important part of our history. I am proud to honor her work and look forward to celebrating Granny D Day,” said Levesque, a Democrat from Brookline.