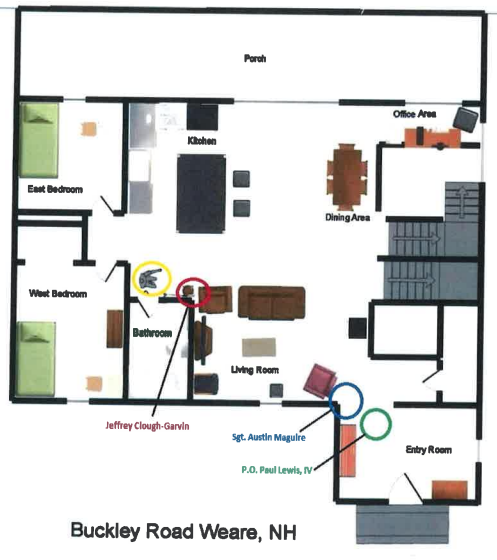 Diagram of the Weare home where the officer-involved shooting occurred on Aug. 1. Jeffrey Clough-Garvin committed suicide after being shot by Weare Sgt. Austin Maguire.

CONCORD – The review process that led to the Aug. 1 police-involved shooting in Weare being deemed justified shows it’s time for civilians to have a say in making such determinations, according to a well-known New Hampshire attorney.

Paul Twomey said he didn’t find fault with the shooting itself but was critical of the review process undertaken by Attorney General Gordon MacDonald’s office, which along with state police, investigates all officer-involved shootings.

“I believe we need some civilian non-law enforcement involvement in reviewing these situations with at least some persons who don’t work with police being able to ask questions before the case is closed,” Twomey said.

It’s an issue that will come before lawmakers in the upcoming session with House Bill 1257 seeking to form a committee to study bringing civilians into the review process.

Almost all such officer-involved shootings are deemed justified by the Attorney General’s Office in New Hampshire, according to records dating back three decades. No criminal charges have been brought in the handful of cases that weren’t found to be justified.

Twomey reviewed the body camera footage of the two officers who responded to the Weare home where Jeffrey Clough-Garvin, 43, committed suicide after being shot by Weare Police Sgt. Austin Maguire on Aug. 1.

“I don’t see any reason to criticize the actual shooting — it was a highly volatile and dangerous situation and there is nothing I see in the videos that would raise a question about the officers’ version of events,” Twomey said.

The Attorney General’s report said Sgt. Maguire shot Clough-Garvin, 43, in an exchange of gunfire, but Clough-Garvin fired the fatal shot himself and his death was ruled a suicide. Clough-Garvin shot Officer Paul Lewis IV in the arm shortly after both officers entered the home.

“I do see a reason to criticize the review process,” Twomey said. The videos are posted at the end of this story and on the Attorney General’s website.

MacDonald’s spokesman Kate Spiner said there was no criticism heard at the recent press conference announcing the Weare findings or after.

“The investigation was to determine the legality of the use-of-deadly-force by law enforcement, not the propriety of tactics or procedures,” Spiner said.

About House Bill 1257, Spiner said, “At this time, this office has not reviewed the legislation and we are unable to comment.”

The videos show the officers arriving at the home for a domestic complaint and talking with Clough-Garvin’s wife outside by the entrance, telling her to stay there. She told police her husband was armed and would kill them. Gunfire erupted within 30 seconds of the officers entering the home.

Twomey said: “There is no mention of the decisions that created the situation.

“As I understand it there was a distraught violent person who had ingested drugs and exhibited extremely dangerous behavior. I see no review or even discussion of the decision to enter the home once the wife had been safely removed (although telling her to wait by the door area as they entered does appear to me at least to be unnecessarily endangering her.)” Twomey said.

Twomey wondered why the police officers didn’t wait and try to begin negotiating before entering the home.

“There well may be good answers to these questions but it is instructive that the current review process by the Attorney General acting alone fails to raise or address this question. The entry would seem to have markedly raised the danger to everyone involved including the officers themselves,” Twomey said.

“Reviewing it would not be for the purpose of criticism of the officers but rather to see if lessons could be learned that could save lives in the future,” he said.

Rep. Paul Berch, D-Westmoreland, said he was reluctant to give an off-the-cuff opinion of the Weare shooting, but said civilians should be involved in the review process.

“I do think we should have an independent, non-partisan civilian review board to review officer-involved shootings, develop and apply national best practice standards in this area, and issue reports and recommendations, both as a general matter and with regard to specific events,” Berch said.

House Bill 1257 will be introduced Jan. 8 and referred to the House Criminal Justice and Public Safety Committee.

Rep. Amanda Bouldin, D-Manchester, submitted the legislation that would form a study committee to examine the benefits of having some kind of citizen review board for officer-involved shootings.

The committee would look at “opportunities for and the value of citizen involvement in the department of justice’s investigations of officer-involved shootings.”

“I hope most legislators are open to having this conversation,” Bouldin said.

These videos include language and images that may be unacceptable or troubling to viewers. Viewer discretion is advised. Click on the Video Clip to continue or “Return to DOJ Home” to cancel.