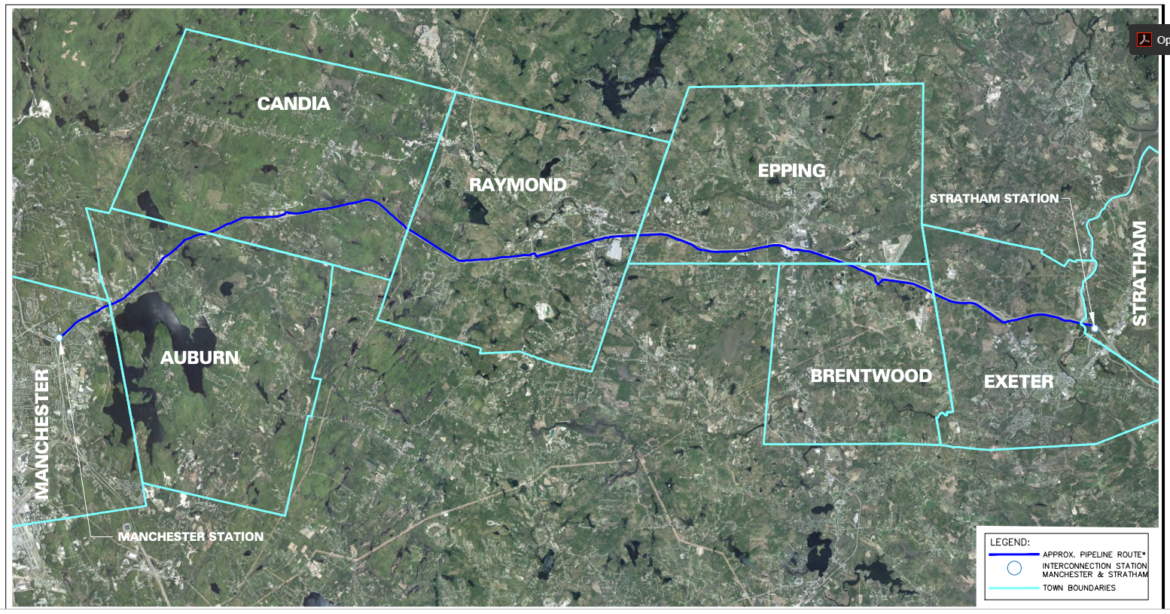 Liberty Utilities proposes a new natural gas pipeline along Route 101 from the seacoast to Manchester, and a 2 billion-gallon tank for storage of liquefied natural gas (LNG) in Epping.

For investor-owned utilities, “rate base” is the name of the game.

Rate base is how these companies make money.  Roughly speaking, “rate base” means the present value of the capital assets (think poles, wires, transformers, pipelines, tanks, trucks, buildings, etc.) in which the utility has invested so that it can provide service.

The Public Utilities Commission (PUC) sets a utility’s rates based on its operating costs plus a reasonable return on the company’s rate base.  So, the math is inexorable:  The higher the rate base, the higher the rates.

So, if you were running an investor-owned utility and had a chance to double the size of your rate base, of course you’d do it.  And that’s exactly what Liberty Utilities is proposing to do in New Hampshire with its controversial Granite Bridge project.

That’s also essentially why my office, which represents the interests of residential utility customers, recently came out firmly against the project.

We were not alone.

September 13 was the date on which the parties to the Granite Bridge proceeding at the Public PUC filed written testimony on whether the PUC should green-light the plan to build a new natural gas pipeline along Route 101 from the seacoast to Manchester, and a 2 billion-gallon tank for storage of liquefied natural gas (LNG) in Epping.

With the exception of Liberty itself and the labor union representing its employees, every single party to the case that filed testimony, including the Staff of the PUC, has now declared its opposition to the plan to spend more than $400 million and build these new assets.

Our testimony is the result of many months of painstaking work by our witness, Assistant Consumer Advocate Pradip Chattopadhyay, who happens to be a PhD economist.  Dr. Chattopadhyay is especially concerned about that big LNG tank.  And he has three main objections.

First, according to Dr. Chattopadhyay, Liberty has used an unreasonably inflated forecast of the future demand for natural gas.  “The situation in and around the Route 101 energy corridor is in a state of flux,” he stated.  “It is overly optimistic to assume that not only will Liberty Utilities acquire necessary approvals but also start attracting customers in prospective franchises four to give years into the future.”

“That optimism actually seems particularly suspect,” Dr. Chattopadhyay added, given that another utility – Unitil – has already been granted a franchise to provide service in Epping.”  The PUC granted this approval in February.

Second, the Assistant Consumer Advocate argued that it is unfair and unreasonable to use a 20-year planning horizon to justify imposing a huge new capital investment ($414 million, according to the most recent estimate from the utility) on today’s ratepayers.  “Existing customers are being asked to incur costs now to meet needs of future customers,” said Dr. Chattopadhyay, referring to this as a “cost-benefit mismatch.”

“A lot can change in 20 years,” he added. “Energy production technology and the policy climate could drastically change in twenty years to render the proposed projects stranded investments.”

With respect to the question of stranded utility costs, those who do not remember the past (specifically in this instance, the 1988 bankruptcy of Public Service Company of New Hampshire because of the Seabrook nuclear power plant and, more recently, the $400 million in stranded costs that Eversource customers are eating because of the nearly useless mercury scrubber at the coal-burning Merrimack Station) are doomed to repeat it.

Finally, Dr. Chattopadhyay contends that Liberty has failed to make a compelling case for not simply relying on existing propane gas facilities (which Liberty wants to retire) in lieu of building that big LNG tank in Epping.  Conceding there might be “resiliency benefits” to building the tank, Dr. Chattopadhyay nevertheless argued that the cost savings of sticking with the propane facilities, at least for the present, cannot be “assumed away.”

It is worth pausing here to note what Dr. Chattopadhyay has not argued on behalf of the Office of the Consumer Advocate.  He did not contend that the climate crisis should preclude any expansion of infrastructure related to the use of natural gas (a carbon-emitting fossil fuel).

That argument, or something close to it, appears in the Granite Bridge proceeding via Elizabeth Stanton, also a PhD economist, testifying on behalf of the Conservation Law Foundation.  “The impacts of climate change increase the risk of future stranded costs arising from new fossil fuel investments,” Dr. Stanton said in her written testimony.  She criticized Liberty for its “failure to adequately consider lower cost and cleaner alternatives to additional gas investments.”

Also submitting testimony in opposition to Granite Bridge was the Pipe Line Awareness Network for the Northeast (PLAN-NE).  Its witness, veteran natural gas analyst John Rosencranz, took the position that “building a new high-pressure pipeline and an on-system peaking facility [i.e., the LNG tank] would cause a wasteful duplication of capacity.”

Rosencranz testified that Liberty “should modify its gas supply strategy to add new capacity and supply resources in smaller increments.”  That, he said, “would allow the Company to take reasonable steps to meet its near-term requirements without over-building.”

Even the PUC Staff – which is treated as if it were a party to PUC proceedings, but which typically commands the middle ground in such situations – came out solidly against the Granite Bridge project.

“We find increased pipeline capacity to be necessary, but we believe that [Liberty] has not undertaken sufficient analysis to demonstrate that the proposed Granite Bridge Pipeline is the best alternative to providing that capacity,” testified consultants John Antonuk, John Adger, and James Letzelter.

As for the LNG tank, the PUC Staff witnesses said, “relying on sustained continuation of [Liberty’s] projected customer growth rates does not form a foundation for committing now.”  They warned of “a large potential for substantial LNG facility installation costs to grow substantially.”

Liberty has been silent about these developments in the PUC proceeding.  That stands in sharp contrast to its boast last year that it had won endorsements of the Granite Bridge project from 22 of the 24 members of the New Hampshire Senate. (Two Republicans were the only holdouts.)

How do you square this bipartisan support (including the Senate’s leading voices on energy) with the chorus of opposition from a wide spectrum of expert witnesses in the PUC proceeding?  The answer is simple.  PUC proceedings, unlike political deliberations, require sworn testimony.