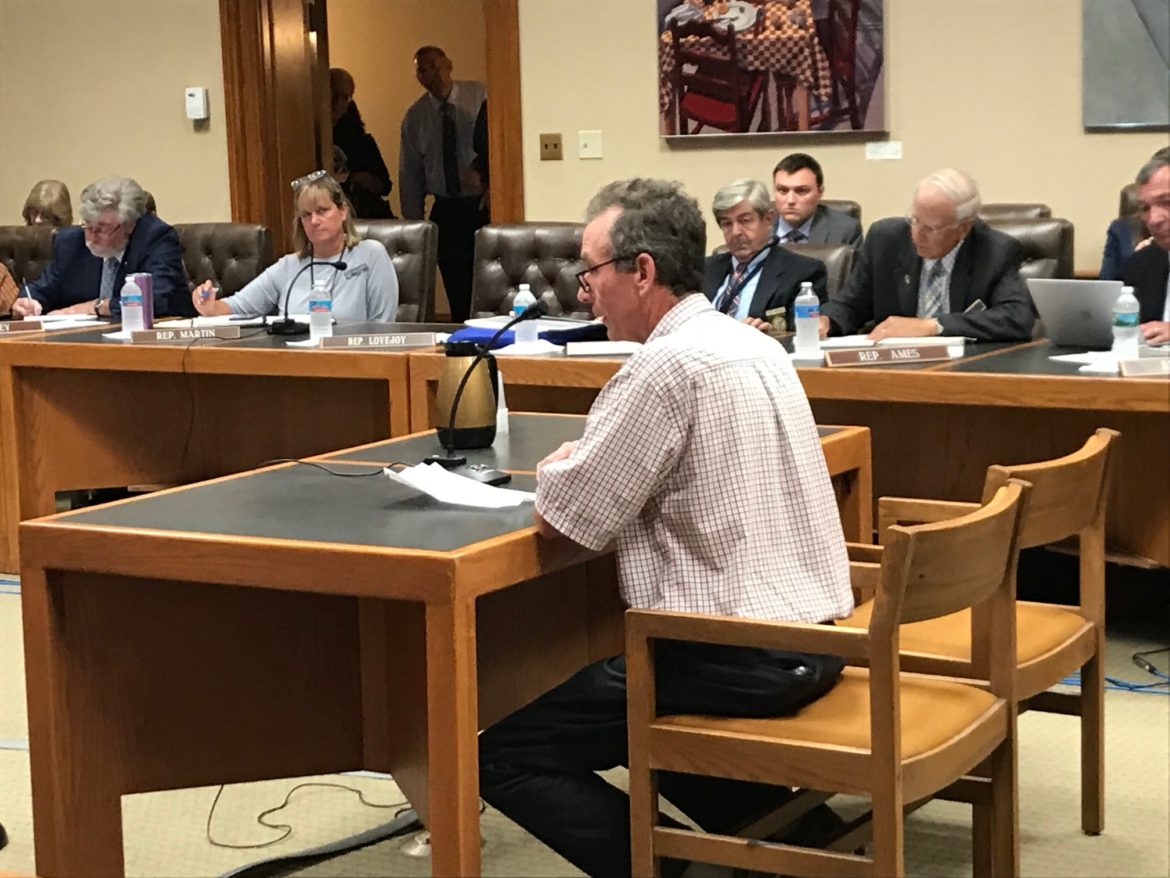 Frank Sprague, chair of the Claremont School Board testifies Thursday before a House and Senate committee reviewing the effects of the budget veto and continuing resolution.

Grenier referred to 4 percent annual cuts in stabilization grants to school districts that began three years ago. The budget lawmakers passed would end the reductions and return funding to the original level established in 2011 when the education funding formula was last changed.

Grenier was not alone in complaining about Sununu’s veto of the $13.3 billion budget passed by lawmakers in June, as other elected officials, educators and students told of excitement turned into disappointment with the Sununu veto.

“We looked with excitement on the proposed changes (in the vetoed budget), which were transformational for us in Claremont,” said Frank Sprague, chair of the Claremont School Board. “That excitement died quite suddenly with the stroke of a pen with the governor’s veto.”

Without the new budget in place, there is an additional 4 percent reduction in stabilization grants, Sprague said, meaning Claremont will have lost over $1 million in state education aid.

“If I sound angry, I am,” Sprague told the ad hoc finance committee reviewing the effects of the veto and resulting continuing resolution that allows state agencies to spend at last year’s levels for three months. “I had hoped cooler heads would have prevailed.”

Sununu, in a letter to superintendents, principals and teachers, agreed to fund stabilization grants at 90 percent of their original level, and to include $25 million for fiscal disparity funding — a first for the governor — that would be half of what lawmakers proposed in their budget to help the most property-poor school district struggling to provide education with escalating local property tax burdens.

Sununu’s proposal would provide $71 million in increased education funding over the 2020-2021 biennium, while the vetoed budget contained $138 million in new education aid to school districts.

Sununu also proposes spending $60 million in Education Trust Fund surplus money for capital projects based on a formula lawmakers used to distribute $40 million over the biennium in revenue sharing to all communities.

Sununu noted education funding is at the forefront of budget negotiations, but said lawmakers’ funding levels are not sustainable long term, particularly in light of a declining student population statewide.

Sununu agreed with lawmakers to fully funding kindergarten without depending on Keno revenues and special education.

Grenier told the committee his community closed its last elementary school and moved those students into the middle/high school which was built in 1919.

“I had to look my grandson in the eyes as I put him in a building built in 1919 before my father was born,” Grenier said. “Is this the legacy we want to leave in New Hampshire, that we take care of kids from rich communities, but if you come from property-poor towns, we throw you in the back of the bus?”

He said the town does not spend money frivolously on education noting it has some of the lowest salaries, which contributed to the one-third turnover in staff this year.

Linda Wadensten, chair of the Newport School Board, said the district “has the leanest budget we have ever had,” and does all it can as a property-poor community to support education.

Newport would have received $2.56 million in additional state education aid under the budget, but would receive $835,771 less under Sununu’s proposal.

The chancellors of the university and community college systems urged lawmakers to maintain the levels of state funding for higher education contained in the budget passed by lawmakers, which was considerably higher than what Sununu proposed.

Under the budget, the community college system agreed to hold tuition to last year’s level, while the university system agreed to freeze tuition in the second year of the biennium while increasing it no more than the rate of inflation the first year.

“The effect of the continuing resolution is to create major uncertainty,” said Ross Gitell, community college chancellor, “if we can hold the tuition level for the biennium.”
He said the college has set tuition at last year’s level in “a leap of faith” system funding does not change in a negotiated deal.

University system chancellor Todd Leach had a similar message touting the need to keep tuition costs down as 60 percent of the state’s graduating seniors go to out-of-state colleges, where many of them will remain.

The trustees have set tuition this year at the rate of inflation.

“We would really like to send that broader message that we want to keep more students here in New Hampshire,” Leach said. “Our state needs them, certainly, our workforce needs them.”

John Morison, chairman and CEO of Hitchiner Manufacturing of Milford, told the committee his company works with both community colleges and the University of New Hampshire and Keene State College to train and educate its workforce.

If the company is to maintain its success, he said, it has to invest in its employees.

Yet he said, he pays some of the highest business taxes in the country, while business owners also have to pay taxes on the dividends they earn.

“Listening to the people here today, we have a revenue problem, a revenue distribution problem,” Morrison said. “I strongly recommend you look for other forms of revenue to help solve these problems.”
Several other people also suggested the state stop relying on local property taxes to pay for education.

Education Commissioner Frank Edelblut told the committee that the budget veto and subsequent continuing resolution has had little immediate impact, but could in the future if a compromise is not reached.

The department has been able to send kindergarten payments out under the old formula and is preparing for other disbursements like building and adequacy aid and for charter schools.

He said the new school free breakfast program does not have funding because of the budget veto nor does the New Hampshire scholars program.

With the uncertainty, he noted two of the three new building programs approved for state aid are on hold until there is a budget resolution.

But several lawmakers noted there is a change to kindergarten funding, and with no budget, stabilization grants have been reduced by 4 percent.

When will those distributions be handled asked Senate Finance Chair Lou D’Allesandro, D-Manchester?

Edelblut said that would be depend on the compromise and how lawmakers want the distribution handled.

He did note that under the kindergarten aid distribution, some communities received state aid that would not be eligible under the operating budget adopted by lawmakers.

He said those towns received $170,000 in state aid. “That money may need to be sent back to the state,” Edelblut said.

The public hearing on the budget veto’s effects on education is the last in a series of three the ad hoc finance committee scheduled.

Earlier, one hearing focused on health and human service programs and another on the rest of state governor outside of education.

Sununu and Democratic leaders met this week without a resolution and additional meetings are scheduled next month.