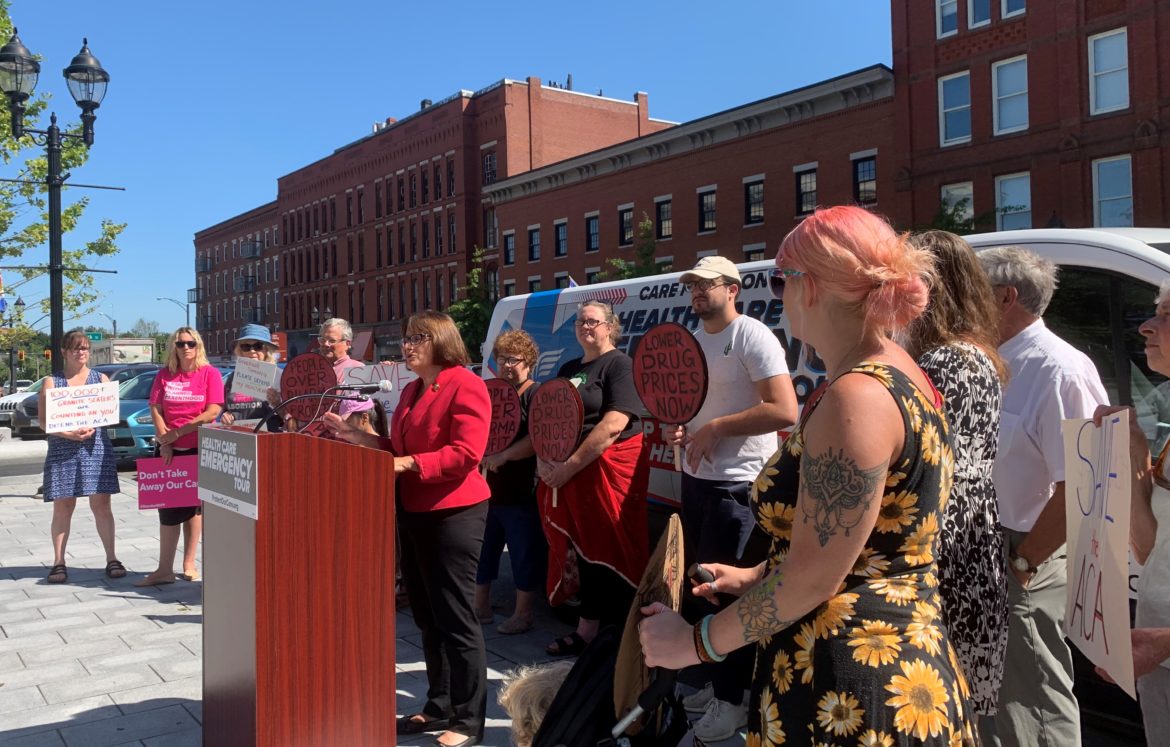 U.S. Rep. Annie Kuster, D-NH, speaks to a group in Concord on Tuesday who gathered with the Health Care Emergency Bus Tour.

Protect Our Care’s nationwide bus tour is making stops around the country to call attention to what the group calls “the ongoing war on health care and the threat posed by Texas v. United States, the lawsuit to overturn the national health care law that covers more than 100,000 Granite Staters directly, and three times as many indirectly.”

Kuster spoke about the politics of health care in Washington.

“My first six years in Congress I voted 55 times not to repeal the Affordable Care Act,” Kuster told a small group gathered in front of the State House. “I have not seen one single proposal from the Republicans how to replace it. They used to talk about repeal and replace. They have no replacement.”

Asked what Gov. Chris Sununu could do, Kuster said, “Obviously he (Sununu) has access to the White House that I don’t.”

Louise Spencer of the Kent Street Coalition said after a Texas judge declared the Affordable Care Act unconstitutional, many states including some with Republican governors, have directed their attorneys general to join the defense of the ACA in federal court.

Advocates have approached Sununu asking him to direct Attorney General Gordon MacDonald to sign on to defending the ACA, Spencer said.

“We’ve been asking and (Sununu) has not committed one way or the other. Given that the governor is tackling the opioid crisis, tackling the mental health care crisis – these are all his top priorities – we would hope that he would be doing all he can to defend the ACA, but he has not stepped in to do that,” Spencer said.

InDepthNH.org requested a comment from Gov. Sununu, but he didn’t immediately respond.

“It is unconscionable that the Trump administration is attempting to sabotage our access to health care every single day,” Kuster said.

“I’m excited to be at the forefront of this fight every day in Congress to make sure that people continue to have access to care, and I was proud to carry a bill to protect people with pre-existing conditions from junk plans.”

Jayme Simoes, state director of Protect Our Care New Hampshire, said, “Rep. Kuster has been a leader in passing legislation to lower the costs of prescription drugs, make health care more affordable and strengthening protections for Americans with pre-existing conditions.”

Carrie Duran of Wolfeboro said the New Hampshire Health Protection Program has helped her take care of her medical needs. “I am extremely thankful that I have access to primary and preventative care so that I can be around longer for my children.”