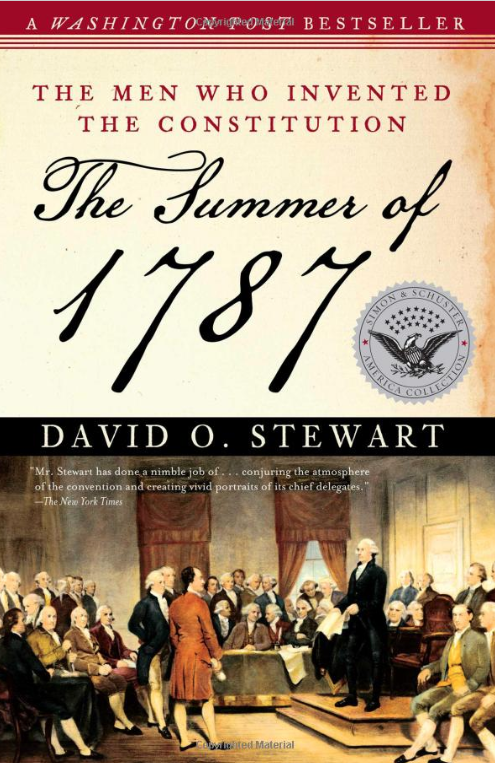 Monica Reads is co-published by InDepthNH.org and Manchester ink Link

Today is the end of my soft approach to what is happening to politics in the USA.  I am tired of the name calling, back-stabbing and vicious personal attacks that the mainstream policy brokers in Congress get away with.  Thus, I decided to read a love story.

The Summer of 1787 is a love story at the heart of where we are today in terms of politics, policy and how we conduct our lives in 2019.  Yes, I have read David O. Stewart’s amazing book of the love so many politicians had for the vicious and hard-fought war of liberty from Colonialism and the British empire.

The battles started in 1776 that lasted four ugly years and took many lives and much treasure.  Individual states were squabbling with each other.  In 1781, the 13 colonies made themselves a nation following the Articles of Confederation.  There was only one Congress called the Confederation Congress and it was regularly disregarded as toothless.  Shay’s Rebellion in central Massachusetts was the provocation to change.

The scene is set in a warm conversation before a fire with two men, George Washington, and his neighbor, George Mason, in 1785.  They are nine years removed from the war and the states have been fighting furiously over money, trade and navigation routes and tariffs.  The all-powerful 13 states have been asked by the two Georges to convene in the summer of 1787 in Philadelphia to write a Constitution that would stop egregious battles between individual states.  The two thought we needed to have all states unite under a federal government.  And now begins the loud, raucous and bitterly fought verbal battles from all states to set down in writing a Constitution that all the states could unite under.  Rhode Island was the only state that did not send a delegate or delegation.

The read was interesting and full of personal information regarding the framers of the Constitution.  You will be fascinated by the details.  You will be fascinated by the great length the author draws on from the day-to-day scribe of each day’s events as posted by James Madison.  You will be mesmerized by the thoughts and verbal back and forth of the great names in our history.  Slavery and navigation rights seem to be front and center.  Slavery is a must have for the three southern states and much opposed by the eastern and middle states.  Also, a point of great concern was their writing it to include future states, changes that would fix the parts they couldn’t come to terms on and how to have the President and Vice President elected.  Some wanted a President “of the people.”  Some wanted the House and/or Senate to select one or two.

We were founded on the noise of many disparate men who really thought hard about the best way to keep a fledgling new country growing and prospering past their own lives.  You will find out so many interesting facts.  You need to read this book.   342.7302 STE can be found in the stacks of nonfiction at your local library.  Go get and Read.