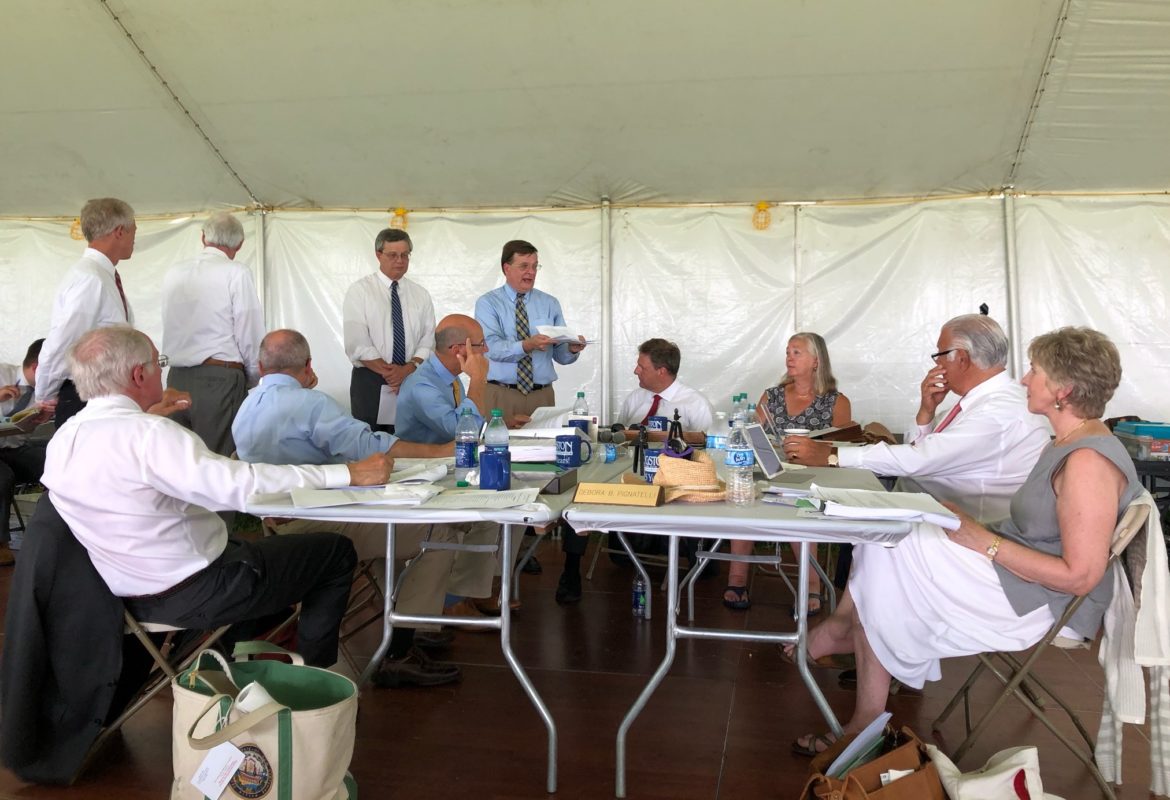 Charlie Arlinghaus is pictured speaking at the Governor and Council meeting in Kingston on Wednesday.

By PAULA TRACY, InDepthNH.org
KINGSTON – Money will be flowing to state departments strapped for cash under the continuing budget resolution after the Governor and Executive Council voted Wednesday to support short-term funding.

Money in the short-term will keep state parks and historic sites open, pay for services for the developmentally disabled, opioid treatment and other programs that spend more money in the first few months of the fiscal year than others.

Executive Councilor Debora Pignatelli asked Sununu if he was willing to bring forward his nomination of Martin Honigberg to the Superior Court, which he withdrew at the last meeting after the council voted 3-2 to oppose Attorney General Gordon MacDonald for chief justice of the New Hampshire Supreme Court.

Sununu said he was not willing to do that yet, noting he decided to take a break from judicial nominations because of the political climate that seemed to be pervading the council.

Asked whether he might reconsider in the future?
“It’s possible. We’ll see,” Sununu said.

Charlie Arlinghaus, commissioner of Administrative Services, said there is a “loggerhead thing going on” in Concord within the veto impasse and the limited money available under the continuing resolution.

This is the eighth time this has happened, he said, and it has been done differently in the past.

This continuing resolution budget is constructed on a 12-month basis with just three of the 12 months in funds available. In past budget impasses, there have been six months, for example.

“A lot of things don’t work” during a budget impasse with only three months available, Arlinghaus said. “So they call it an emergency provision,” when a department needs more than three-twelfths of their budget now.

To get that money, department heads first need to go to the legislative Fiscal Committee and then to the council.

The Fiscal Committee approved all that was requested last Thursday and the Executive Council meeting under the big tent at the Kingston Plains on Wednesday voted to allow the money be spent to fund the requests.

The state needs to go through this “weirdness,” Arlinghaus said, “so things don’t blow up and explode,” Executive Councilor Ted Gatsas of Manchester abstained.

Executive Councilor Andru Volinski asked Health and Human Services Commissioner Jeffrey Meyers and Attorney General MacDonald to brief the council about the indictments against two former state employees charged with sexual assault and other abuses in the late 1990s at the former YDC property in Manchester for troubled youths that is now called the Sununu Youth Services Center.

Meyers, who called the allegations “shocking,” said he met with parents after the indictments to assure them that it is now a modern facility with cameras and protocols meant to protect children.

MacDonald said his office is now in charge of an investigation which is looking at the facility for about a decade around the time of the alleged assaults to see if there are other victims or others who should be charged.

The council met in Kingston where the town is celebrating its 325th Anniversary this week with Executive Councilor Russell Prescott of Kingston hosting the summer meeting.

Sununu lauded the town, its history and read a proclamation.

The following funds were approved Wednesday
HEALTH AND HUMAN SERVICES
– A total of $14 million ($7.2 million in federal money and $7.2 million in state general funds) for Medicare and Medicaid Services to pay for skilled professionals helping those with developmental disabilities.
– $35,267,411 on a pro-rata basis to establish six full-time, temporary positions utilizing State Opioid Response grant funds, by extending the end dated from June 30, 2019, to September 30, 2019.
– $7,951,274 for Medicaid Services
– $2,612,610 from the Temporary Assistance To Needy Families program.

TRANSPORTATION
– $4,604,600 from the National Guard Bureau as part of the five-year Federal-State Master Cooperative Agreement to cover the costs of additional construction projects & designs.
–  $175,000 for airport improvement maintenance in Concord.

DEPARTMENT OF NATURAL AND CULTURAL RESOURCES
– $1,250,000 to operate State Parks
– $78,500 to operate historic sites to pay 35 guides
EDUCATION
– $139,000 for career and technical training PERKINS GRANT
SAFETY
– $210,385 for State Police to deal with the opioid epidemic
JUSTICE