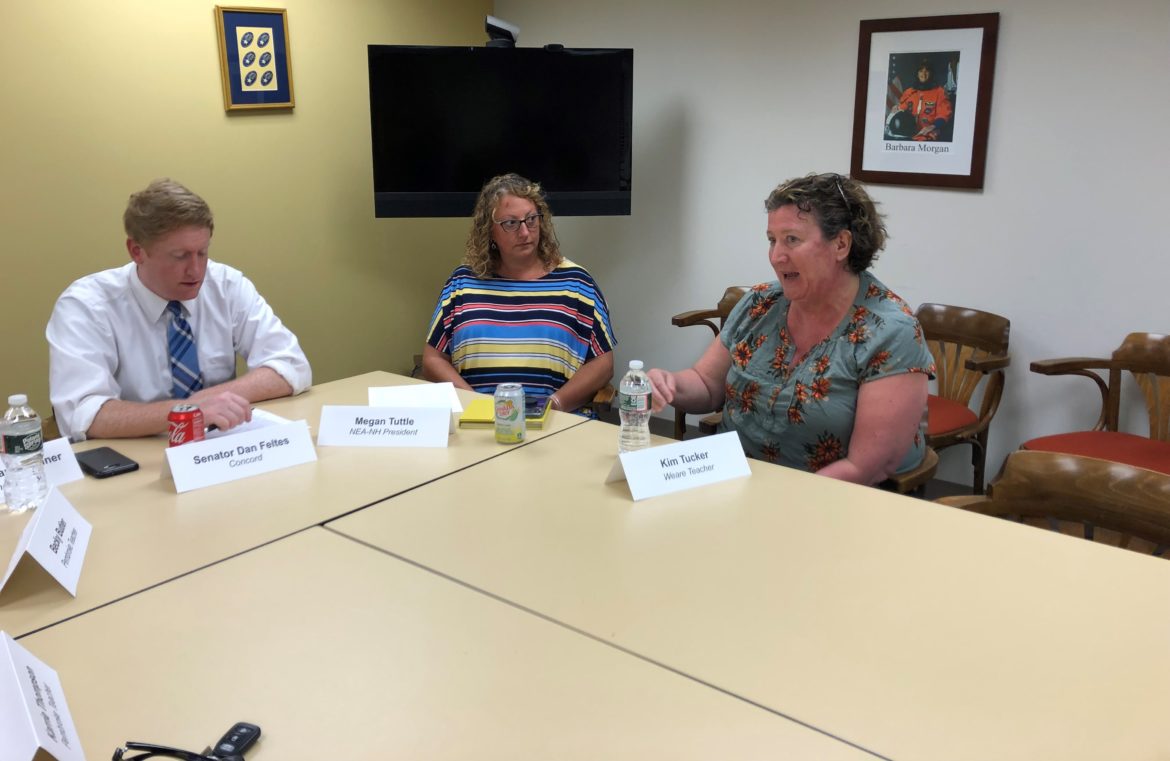 Sen. Dan Feltes, D-Concord, Megan Tuttle, head of NEA-NH and teacher Kim Tucker at Concord roundtable on the impacts of the budget impasse on Wednesday.

By PAULA TRACY, InDepthNH.org
CONCORD – The head of the state’s education association called Gov. Chris Sununu’s veto of the state budget “disgusting” and suggested he spend a week in a public classroom to see how existing resources are just not covering all of the needs.

“We have to fix the way education is funded,” said Megan Tuttle, a former social studies teacher and now president of the National Education Association-New Hampshire chapter, which represents 17,000 public school educators and school workers. She was speaking at an education roundtable discussion in Concord on Wednesday.

The Democratically controlled House and Senate passed a two-year, $13.3 billion budget that would have given schools the largest increase in almost two decades, but it was vetoed by Sununu, a Republican, in June. The state is operating under a continuing budget resolution with hopes that a deal can be brokered before school bells ring across the state to increase those funds and services.

Sununu has participated annually in sleeping outside on a sidewalk at night to draw attention to homelessness, and Tuttle challenged Sununu to spend a week in a classroom to see the issues faced by teachers and see where the resources are spent. The event Wednesday was the third of three roundtables held across the state this week to highlight the impact of the budget impasse on schools.

The others were held in Berlin and at the ConVal school district in Peterborough. At the Berlin event, teachers discussed possible layoffs if there is no budget and that is also apparently the case in other school districts across the state, educators said.

NEA-NH had recommended its members support the candidacy of Democrat Molly Kelly over Sununu during the last election, but she lost. Still, the voters chose to elect a majority of Democrats in both the House and Senate.

Feltes said the budget Democrats passed, which reflected the values of the state, would make kindergarten full day for the first time. It would have included a mobile intervention unit to deal with crisis situations for students, taking that pressure off individual school districts that are facing more mental health issues, an opioid crisis and wellness issues.

“We crafted a budget that we believe truly worked for everyone,” said Feltes, who is exploring a run for governor. “There is only one person who stands in the way and that is Gov. Chris Sununu.” He said the governor is choosing big business, many of which are from out-of-state, over New Hampshire children.

Kim Tucker, a kindergarten teacher in Weare, agreed with Feltes’ assessment. She said in the past 20 years the needs of children have increased tremendously, but the resources have not followed.

Carrie Thompson teaches in Pembroke. “I am furious” with the governor’s veto. “It’s a slap in the face to our students,” she said. “It’s looking at them and saying, ‘we don’t care about you as much as you think.’ There are just so many services we can’t provide.”

Thompson is a resident of Hopkinton, an affluent school district and she works in Pembroke where the students are struggling to get their needs met. She said she raised $2,500 essentially from her friends to buy books for her classroom.

Becky Butler of Laconia, who also teaches in Pembroke said over the years, “the job has not gotten any easier. When we are dealing with kids whose families are dealing with trauma, mental health issues, the opioid crisis.” She said she can’t blame the property taxpayers of Pembroke “because they are just strapped.

“There is nothing fancy at our schools. We are doing the best we possibly can with fewer resources and personnel,” Butler said.

Feltes asked the teachers if they had a message for the governor.

Thompson said while Sununu talks about the tax break for corporations, “They need an educated workforce. What better way to encourage (corporations) to be here than to support education? Think of it as a capital investment.”

Tucker said she liked the idea of the governor coming to substitute for her in her classroom in Weare “and then come to the transfer center to get the stuff we need in the classroom” because that is where she goes to scrounge supplies.

For Sununu to see kids wearing the same clothes day after day would really change his view on things, Tucker said.

Sununu’s spokesman Benjamin Vihstadt told InDepthNH.org after the roundtable that Sununu’s main objection to the budget is not over education funding – he supports those programs. His objection is to raising taxes over 12% and the $100 million structural deficit, Vihstadt said.

According to Vihstadt, Sununu also proposed the following items in his budget which were subsequently taken out by Democrats: