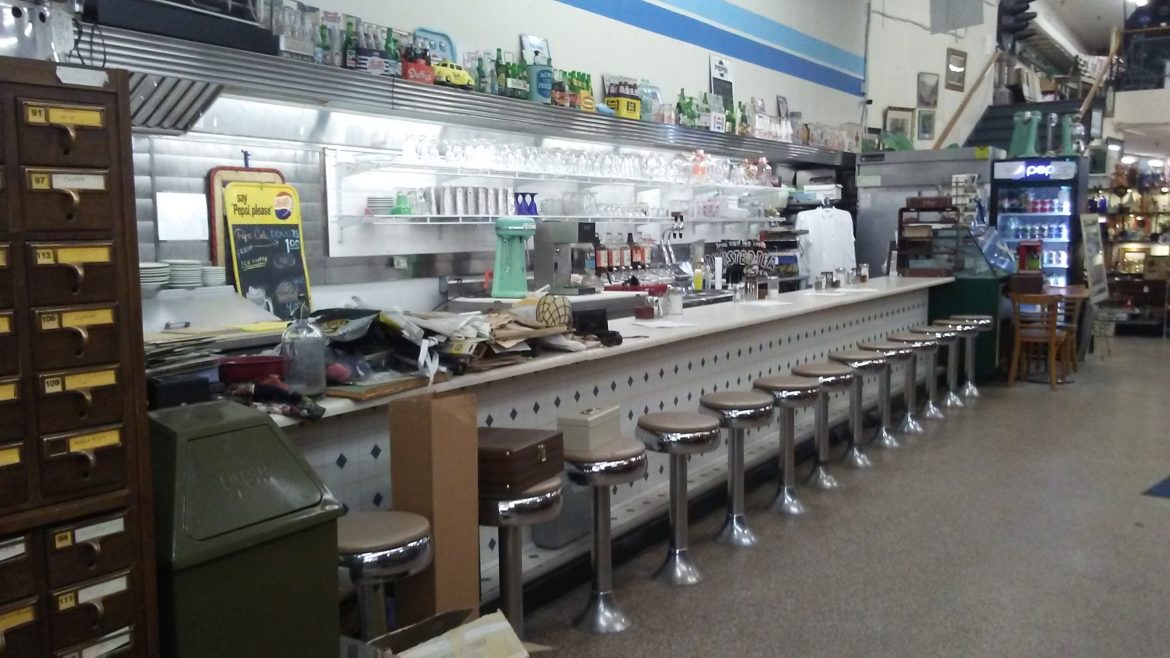 There it was, sitting smack dab in the middle of this place, up the aisle and past the wringer washing machine, the dented watering can, the Elvis Presley albums, the tarnished silverware and the worn veneer furniture.

It was an authentic lunch counter, a soda fountain, the kind you see in old movies, the kind where you could get a hot dog, a frappe, and an iconic look back at America, all for the price of a cheap lunch. This section of the store represented another time in this country, a time I remember, but many people younger than 40 see as a quaint relic, a piece of nostalgia that their parents and grandparents might recall, but to them is lumped in the same category as Conestoga wagons and the Pony Express.

And there it sat in an old J.J. Newberry’s Department Store in downtown Laconia.

It’s now part of an antiques store, filled to capacity with 22,000 square feet of the detritus of a society that would have once thrown this stuff away, but now sells at premium prices, probably because most of us made the stuff rare when we threw ours away.

I was intrigued by the wares of the 150-plus dealers who display at the Laconia Antique Center, but I was totally captivated by the soda fountain leftover from when this place changed hands from a department store to Bloom’s Variety, and now as a mecca for people like me who walk through and say, “I remember that!”

After all, how many of us realize just how important this piece of history – a lunch counter like this one with 13 glimmering chrome stools – was to race relations in America as it spun its way into history, an unlikely symbol of what this country was, what it went through, and what it has become?

As we celebrate Independence Day, that lunch counter, or one similar to it, has a special significance. Another one in Greensboro, N.C., became a symbol in 1960 when four African American college students sat down in the F.W. Woolworth store in Greensboro. They were not served, and it was legal back then because of the laws at the time.

I grew up in Lawrence, Mass., where we had an F.W Woolworth on Essex Street, a place I would frequent throughout my youth as my mother would walk with my brother and me from our house to go shopping. A trip to the Woolworth lunch counter was a special treat, worth the price of the shoe leather walking the mile from our neighborhood on Park Street. I would get a scoop of ice cream, a hot dog if it was a special occasion.

It would have been about the same time period that the four men were sitting down at the Greensboro lunch counter, not being offered the opportunity to taste that vanilla ice cream or a hot dog on a fresh bun. I knew nothing then about what was happening hundreds of miles to the south. I thought it was a hoot to twirl on those stools, have the waitress remark to my mother about how well behaved her boys were, and eat that ice cream as slowly as I could, savoring every bite. What was going on in Greensboro didn’t concern me.

Racial segregation didn’t have anything to do with my world.

But people were changing things. It started at a lunch counter, in a bus, on a bridge, and lots of other places where people spoke truth to power. In Greensboro, students, civil rights organizations, churches, and others mounted a six-month-long protest, and in the end, F. W. Woolworth changed its lunch counter policy in July of 1960, serving all people.

Was it a time when we all lived happily ever after?

You just have to turn on the network news on any particular evening to answer that question.

Have we come far? Yes. Do we have much farther to go? You can answer that as well as I can.

But the promise of that lunch counter remains. (If you want to see it, check out the Laconia Antique Center’s website at laconiantiquecenter.com for their hours. The website says the counter still serves light fare daily, but I called the store and was told it is open on Saturdays and Sundays only from 11 a.m. to 3 p.m. Their telephone number is 524-9484.)

Earlier this week, I met a man who was launching his boat and who started sharing his life story with me. He turned out to be one heck of an interesting character.

He told me he was a Marine who never learned how to swim.

That’s right, he said. He said nowadays when he goes out in his boat fishing, he ties himself to the boat. That way, he can get himself back in if he falls out. That sounded to me like a good way to turn yourself into an anchor.

He served in the Marines in the early 1960s, and the Corps had the good sense to keep this recruit’s feet firmly planted on the ground. Unfortunately, that ground was in the jungles of Vietnam. He made it through basic training, and the instructors pretty much gave up on him after trying to teach him how to swim. Instead, he was paired up with a buddy whose job was to help his fellow Marine get across any water obstacles they might encounter, even if that meant carrying him across on his back.  This man smiled as he told me he felt bad for the guy who got him as a partner.

He went through only eight grades before joining the Marines. He also told me other things about himself, things I won’t go into here, but I could see the traces of a life well lived, probably hard lived at times, etched on his face. He and I had about as much in common as an apple and an orange.

But as we stood there on the side of a lake on a sunny summer day, it struck me that we were talking like we’d always known each other, and as he was sharing, I was listening intently. I heard that man loud and clear even though I never got his name.

On another day, in another place, I can’t say that would be the case, especially if we were facing off on a street corner at a political rally or just out at a social gathering.

I decided that I need to do more of that: Listen to what others are saying. They might believe in things totally foreign to me. They might have views that conflict with my own. They might have once been scared young men with an eighth-grade education who can’t swim, yet fought in the Marines because they were sent to a foreign country on my behalf.

That strikes me as the essence of our country these days: Lots of us – 330 million – with different points of view, yelling into the wind at each other. We all think we’re right. We all think the other side is a bunch of imbeciles. Nothing gets done sometimes. We sometimes feel like a nation of men and women believing in different ideas, never really coming together on anything.

We can do better than that.

Happy 243rd Birthday, America. It’s a frustratingly paradoxical nation, where we seem to be replaying the same battles over and over. But this idea for a nation sketched out on paper so many years ago still works.  It might get loud sometimes. It might be downright maddening. We might get bogged down in a wrestling match with the details. But we still make this nation work. When we can tell our fellow citizens that they are wrong and we are right, when we can speak what’s on our minds, when we can change laws and change minds, when formerly oppressed people become part of the experiment we call democracy, that’s a place where I want to live.