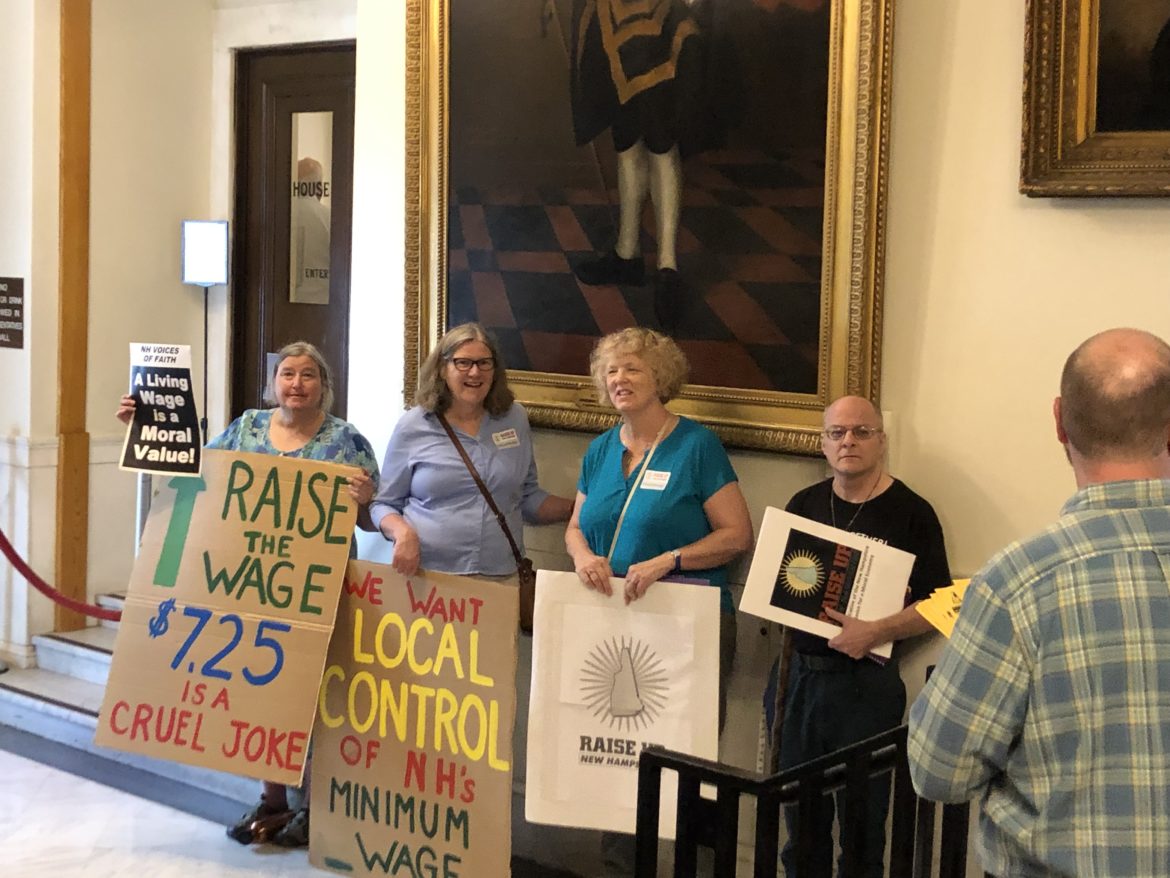 The State House was busy Thursday with lawmakers and citizens making their voices heard.

CONCORD — Spiced with contentious partisan debate Thursday, the House and Senate approved a $13.3 billion two-year operating budget down party lines that faces a near certain veto from Gov. Chris Sununu.

Lawmakers without dissent also approved a three-month continuing resolution to allow state agencies to continue operating at approved spending levels if the budget is vetoed.

The continuing resolution will remain in effect until Oct. 1 or until a new operating budget is adopted.

While Democrats say their budget addresses the state’s most pressing needs, works for all of the state’s people, and will address increasing property taxes, Republicans say it is unsustainable, has unprecedented spending increases, and raises business taxes at time of record returns urging Sununu to veto the bill.

State Sen. Chuck Morse, R-Salem, said if the governor were to veto this, he would support it and work tomorrow to reach a new deal that better reflects what New Hampshire wants and needs.

“I believe we are headed toward that income tax,” he said. “You are changing the face of the state of New Hampshire by doing this budget.”

But Senate Finance Committee Chair Sen. Lou D’Allesandro, D-Manchester, said the budget is balanced and carries a surplus, as is required by law.

“It puts money into revenue stabilization, and it funds the government that is needed,” he said.

“All of the people are taken care of. That’s a miracle. I have been here for a long time. This is one of the finest budgets that has ever been made. We had resources and allowed them to be spread out so that all the people can benefit,” D’Allesandro said. He said the governor should support it.

Sen. Dan Feltes, D-Concord, said Sununu does not like the budget because he doesn’t get everything he wants, yet he has not given up anything.

The House and Senate gave up their top priorities to come to an agreement, he said. Sununu has not given up anything.

“We need a budget that grows the economy so that we have the resources to do…what all of us want to do.”

But Senate Republicans said the budget passed is a 13.6 percent increase from the current one and includes a structural deficit, where the state spends more than it takes in, by about $93 million over two years.

Sen. Regina Birdsell, R-Hampstead, said Sununu ran on continuing “a pro-business agenda and guess what? He won,” she said. “He is our firewall.”

Bradley called Thursday one of the saddest in his 11 years in the Senate.  “Sad, because we agree more than we disagree,” he said. The all-or-nothing log-jam politics of Washington, D.C. that he experienced as a congressman, Bradley said are now in Concord.

“Today we have a lot of hot rhetoric being thrown around,” he said. “It seems as if the hottest rhetoric is about these big out-of-state corporations. They employ thousands and thousands of our residents.”

Sen. Martha Fuller Clark, D-Portsmouth, reminded fellow Senators, “we are riding that prosperity on the backs of local property taxpayers.”

The House passed the two budget bills with little debate.

The governor and Democratic lawmakers sparred since the Senate passed its version of the budget earlier this month.

Both sides claim they have met the other “more than halfway” making concessions and agreeing to changes, but the unmovable roadblock remains what happens to business tax rates.

Democrats say the rates are “stabilized” at 2018 levels, while Sununu and Republicans say they are a tax increase because the rates went down in January under the last budget plan.

Maintaining the rates produces $90 million in revenue the Democratically controlled House and Senate need to balance their compromise budget and say business taxes have been reduced over the last few years and are now the lowest in New England.

Democrats say they addressed nearly all of Sununu’s concerns: removing paid family and medical leave, which he claims is an income tax, and a new capital gains tax, while agreeing to a new 24-bed forensic hospital and student debt assistance programs he championed.

Sununu said his office worked to find common ground with Democrats on education funding, Medicaid provider rate increases, the new Secure Psychiatric Unit, upgrading Department of Transportation vehicles, $40 million in revenue sharing with municipalities, and funding for child protective and mental health services, and reducing the number of mentally ill patients in hospital emergency rooms while they wait for a bed to open at the state psychiatric hospital.

Democrats have touted the same things as well as ending the wait list for developmentally disabled services, investment in the state’s workforce including additional money for the university and community college systems, lead paint remediation and fixing state-owned dams as areas of agreement.

Democrats note their budget works for all people of state and addresses property tax relief sending more than $200 million to communities in additional education funding aid and revenue sharing.

“This budget does more for cities, towns and school districts than we have seen in a long time,” said House Finance Committee member Rep. Sue Ford, D-Easton.

“We keep spending more and more on education, while that population is declining.” Weyler said. “The elderly population is growing and that is where the money should go.”

Republicans also claim the budget is not balanced as it depends on the current surplus to cover a $93 million spending deficit in the second year of the budget.

“Spending decisions in this budget will set New Hampshire up to fail,” said Rep. Sherman Packard, R-Londonderry, “and will only lead to an income tax down the road.”

Democrats contend their budget has a $24 million surplus at the end of the biennium.

The budget spends $5.5 billion in state general funds, which is approximately $500 million more than the budget proposed by Sununu.