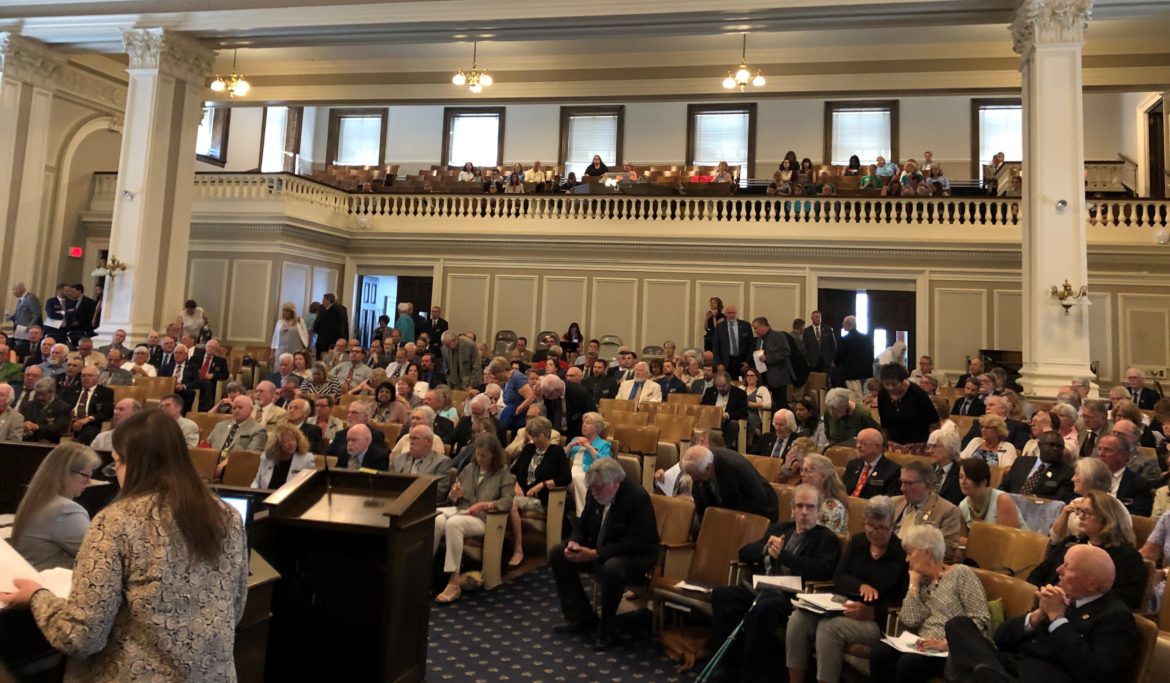 CONCORD — The House and Senate finished their legislation session Thursday acting on 31 bills – including one suspending the work requirement for the Medicaid expansion program and another raising the minimum wage to $12 an hour over the next two years.

The Health and Human Services Commissioner would be able to waive the work requirement under the Medicaid expansion program called the Granite Advantage Health Care Program under the compromise reached on Senate Bill 290.

The House voted 206-147 to approve the compromise while the Senate voted for the bill on a voice vote.

The work requirement was included when the program was reauthorized last session for five years.

The department has been unable to reach 20,000 of the 50,000 people on the program to inform them the penalties for not meeting the work requirement, which may also include education, training, community service and care giving, would go into effect July 1.

As a result, the agreement reached on the bill allows the commissioner to waive the requirements until July 1, 2021 allowing this or the next legislature to change the requirement.

The compromise clarifies that self-employment, mental health treatment, and substance abuse treatment and recovery qualify to meet the work requirement.

Under the plan, single parents with children 12 years old or younger are exempt, as someone who is homeless, or care givers, but grandparents taking care of their grandchildren and full-time students are not, but education and care giving hours count toward the 100-hour per month requirement.

Sen. Jeb Bradley, R-Wolfeboro, said given the litigation ongoing and the fact that 40 percent of the recipients have not been reached, this makes sense. He noted that the work requirement does not go away, just suspends it for a period of time until it can be “implementable.”

In addition, the bill directs the commissioner to seek a change to the state’s federal waiver allowing 45 days of retroactive coverage once a person enrolls in the Medicaid expansion program. Lawmakers want the retroactive period to be 90 days. The change will need federal Center of Medicaid Services approval.

Democrats passed bills that would eliminate the requirement if more than 500 people lose their coverage or uncompensated care costs rise for providers, particularly hospitals, but those triggers are not in the final agreement.

Under the Affordable Care Act, the federal government pays 90 percent of the cost of the Medicaid expansion program, while states are required to pay 10 percent.

Rep. Jack Flanagan, R-Brookline, argued raising the minimum would hurt those who earn the least, leading to layoffs, reduced hours and benefits and greater automation.

But Rep. Brian Sullivan, D-Grantham, said the state has not had its own minimum wage for more than a decade.

Gov. Chris Sununu has said he will veto the bill.

The House and Senate voted to approve a compromise bill that would require school districts to develop policies to regulate gun possession on public school properties.

House Bill 564 requires local school boards to hold public hearings prior to authorize someone to possess a firearm on school property and would exempt that information from the state’s right-to-know law.

The House and Senate voted to establish a protective order program for vulnerable adults.

They said too often, by the time abuse, neglect or exploitation can be proven, assets are gone, and the mistreatment has continued.

But opponents said the bill would allow confiscation of firearms in violation of constitutional rights and without due process.

Under House Bill 696, a hearing is required to be held within two days of notification that the person must be of “sound mind” when making a statement, and requires the person to have legal or equitable interest in property a defendant is restrained from taking, converting or damaging.

The House and Senate negotiators most often reference firearms in the bill, but retained a provision to confiscate any deadly weapons involved in the abuse, exploitations or neglect.

The House approved the bill on a 199-143 vote while the Senate adopted the report on a voice vote.

The House voted 209-141 and the Senate had a voice vote to approve a bill requiring health insurers to provide fertility care for couples who are infertile.

Senate Bill 279 sets the parameters of coverage to the insurance policy that covers state employees.

Supporters say the cost of fertility care is very expensive and out of reach for many couples, but opponents said it will increase insurance costs for all covered by private insurance.

Under a compromise agreement, sexual harassment complaints in the General Court would be handled by an independent human resources professional who would be able to seek expert help to conduct an investigation.

The policy will provide protections for legislators, staff, lobbyists, and the public. The Senate President and House Speaker may be informed of complaints but would have no oversight or responsibility in resolving the complaints.

The House and Senate want to return money raised in carbon auctions to energy efficiency programs. For many years auction proceeds have been returned to ratepayers to reduce electricity costs.

But under House Bill 582, the rebate money from residential ratepayers would be used to increase funding for state energy efficiency programs, while commercial and industrial customers would continue to receive rebates.

A section concerning climate change was removed from the bill hoping it would make it less a possible veto target.

The Senate approved the bill on a 14-10 vote, while the House approved it on a voice vote.

The House voted 260-90 to allow an auto driving vehicle pilot testing program in the state while studying how best to regulate the new technology.

The Senate approved the bill on a voice vote.

New construction in larger buildings open to the public will need to have universal changing stations for people with disabilities and their caregivers.

Lawmakers want state environmental regulators to propose remedial action to prevent contamination from the Coakley Landfill in North Hampton from moving off site.

House Bill 494 requires the Department of Environmental Services to develop a plan to solve the problem, determine estimated costs, and an implementation timeline to complete the work.

Under the compromise bill, the work would begin by Sept. 2020, and be consistent with the consent decree signed by the potentially responsible parties.

If the deadlines are not met, the attorney general’s office is required to take appropriate action.

The controversial clean-up plan has stalled and activists have pushed for years claiming the contamination could be responsible for a spike in childhood cancer rates in the area around the landfill.

Underage off-highway-recreational-vehicles drivers over 12 years old would need to be accompanied by a person 25 years or older at all times under a bill that lawmakers approved.

House Bill 592 also requires the departments of Safety and Health and Human Services be consulted by Fish and Game in developing safety courses all under-age operators are required to take.

Unlicensed operators are also required to stay to the right portion of public roadways when on OHRVs and to yield to conventional motor vehicle traffic.