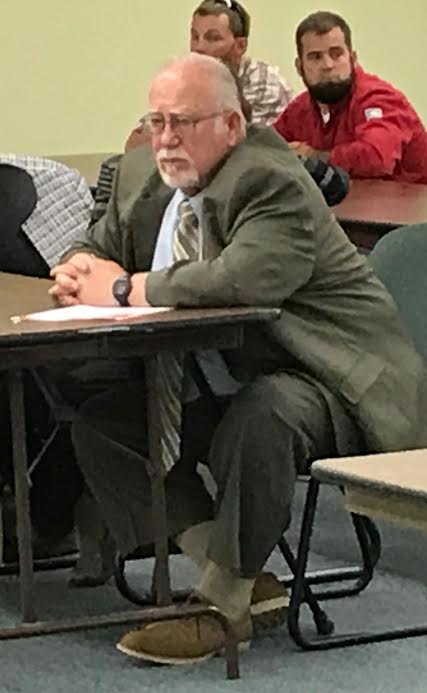 Tom Mullen of Campton testified against the project in 2017.

I am confident our side of this Northern Pass appeal will ultimately prevail, but I believe a key point in our side’s favor was not stressed by our legal team during today’s Supreme Court hearing.  Hopefully it’s not too late to get this into the record with a memo of some sort.

While the New Hampshire Site Evaluation Committee (NH SEC) had an obligation to weigh four clearly stated statutory factors during its hearings and its deliberations on the Northern Pass, it only had to find the applicant lacking in one of those four factors in order to deny the application.

Put another way, even if the NH SEC had found in favor of three out of the four statutory factors, but it ruled against the applicant on the fourth factor, it is my understanding that the NH SEC was required to turn down the application.

With respect to these Northern Pass proceedings, the record shows that over 70 separate adjudicative hearings, the NH SEC carefully considered all of the four following statutory criteria, along with dozens of more issues in the on going process of coming to a decision on the matters at hand:

1.Whether the applicant has the financial and technical ability to build the project.

2. That the project would not unduly impact the orderly development of the region.

3. Whether the project would have unreasonable adverse effects on aesthetics.

4. Whether issuing a certificate to build would be in the public interest.

The record also shows that when it came time to formally vote on these criteria, the NH SEC panel, after considering the first criterion, voted that the applicant was, in fact, financially and technically capable of building the project.

From a statutory perspective, the case was over right then and there!  Factors 3 and 4 were essentially moot.

A negative vote on any one of these four criteria was statutorily sufficient to deny the project an approval — case closed!  In fact, there was no justification or logic for any further consideration of factors 3 and 4, much less, putting them up for a formal yea or nay vote among the NH SEC’s members during their formal adjudicative process.

All this having been said, is there anyone with any reasonable sense of aesthetics that could avoid concluding that the sight of 135-foot-tall steel erector set type towers with thick dangling cables marching down through our state’s pristine White Mountains Region would be unpleasant to the human eyes and mind?

The answer is simple, of course not!

In like fashion, how could the construction of a “for profit” “not needed for reliability purposes” project like the Northern Pass be in the public’s interest.

The Northern Pass is an optional project designed to create big fat revenues for its corporate owners and for the company’s stockholders.  Why should New Hampshire’s citizens and land owners have to suffer a huge loss of aesthetic value to their natural surroundings and to their property values to benefit these other third parties?

Ask me this question and here’s my answer!  Just the 2010 announcement of the Northern Pass towers and cables being built right through the Owl’s Nest Golf Club property in Campton and Thornton was enough to put us out of business.

Then, just to add insult to injury, after we painfully went out of business in 2014 because there was no market for selling property in full view of the project’s ugly towers and wires, the Northern Pass announced it was not going through Owl’s Nest after all.  It had decided instead to go underground down Route 3 in our region.

Hopefully there is still time to supply the Supreme Court judges with a memo reminding them that the statutory process only required a negative vote on one of the NH SEC’s four critical factors to sink the Northern Pass ship and that’s what the record of the SEC’s deliberations shows happened in this case — as the old saying goes, it’s one and done!

Hang in there everyone — have faith, the Orangistas will ultimately prevail!
Tom Mullen