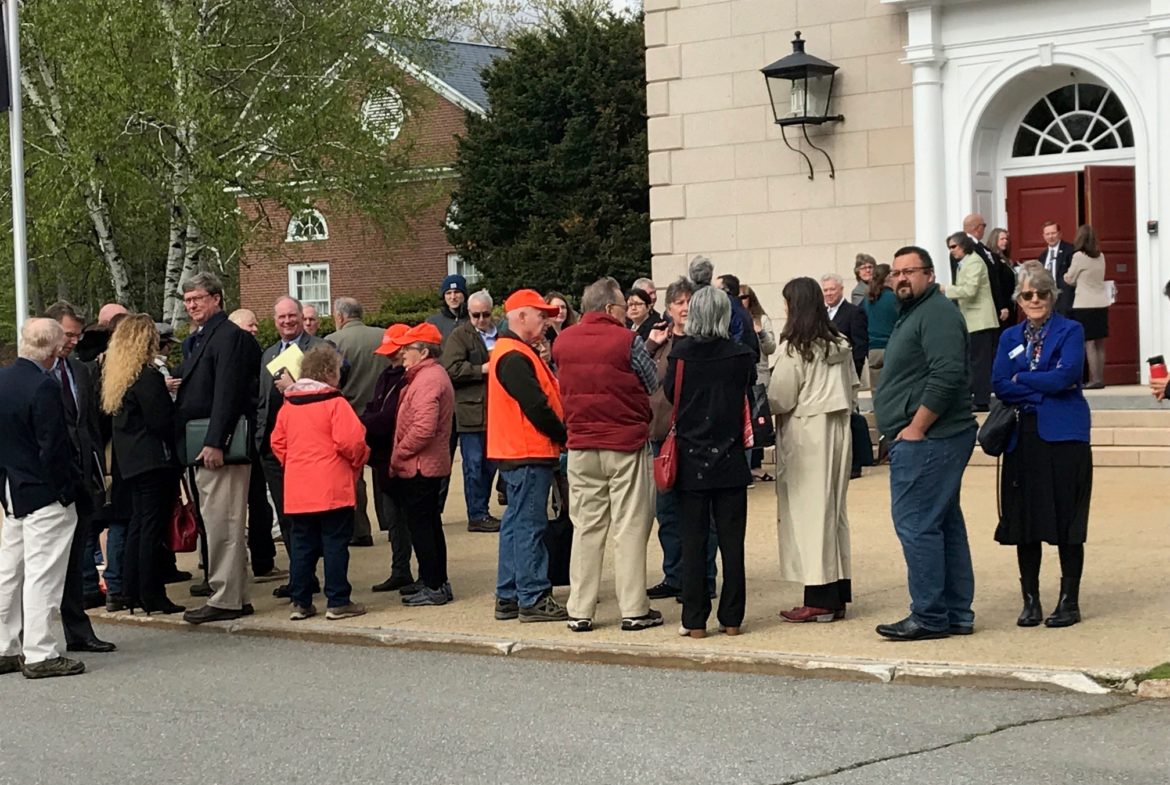 People gathered in front of the New Hampshire Supreme Court Wednesday waiting for oral arguments in the Northern Pass appeal.

But opponents and the Counsel for the Public argued the Site Evaluation Committee made the right decision, correctly weighing the evidence presented in more than 70 adjudicative hearings and the decision should stand.

During Wednesday’s oral arguments, Eversource attorney Wilbur Glahn told the court the SEC failed to follow statutes and its own rules in denying the project and prematurely ended deliberations before assessing the project’s benefits which could have swayed the decision.

The SEC should have considered conditions and mitigations that would have allowed the project to go forward as assumed in law,  he said, but failed to do so.

Instead, Glahn said, the SEC decided the case on aesthetics while ignoring evidence from visual impact analysis that would have addressed regulators concerns about its effect on the region’s tourism, property values, economy and land use.

“Any applicants needs to know where the goalposts are,” Glahn said, but “they kept moving.”

But Supreme Court Chief Justice Robert Lynn said what (Glahn) was saying is the SEC should find a way to grant approval for the project as a way around the applicant’s burden of proof that the project is not unduly harmful.

Later in oral arguments, Society for the Protection of New Hampshire Forests attorney Amy Manzelli echoed the chief justice saying “the applicant assumes some sort of entitlement to have approval,” noting the SEC acted correctly in denying the application because the applicant offered evidence that was not credible or sufficient.

The battle over the 192-mile, 1,090 megawatt, high-voltage transmission line stretching from the Canadian border to Deerfield to bring Hydro-Quebec electricity to southern New England has raged since the project was first proposed in 2010.

The SEC voted 7-0 Feb. 1, 2018, to deny Eversource’s application saying the company failed to meet its burden of proof the project would not unduly interfere with the orderly development of the region, one of the four criteria required to receive a permit.

The committee reaffirmed its decision on the same 7-0 vote in May 2018, after Eversource asked the SEC to reconsider. After that decision, Northern Pass filed its appeal to the state Supreme Court.

On appeal the developers argue the SEC statutes and rules on orderly development are vague and open-ended allowing arbitrary decisions and the SEC failed to clarify or offer guidance on the standards.

Glahn argued the SEC should have continued to deliberate the case instead of stopping once it found the project failed one of the four criteria.

Because they stopped, they failed to consider key components which would have addressed the issues raised in the SEC’s ruling.

Justice Gary Hicks asked Glahn where in law was the obligation to deliberate all four criteria if they determined there could be no permit.

Every major project approved by the SEC has conditions and mitigations but not Northern Pass, Glahn noted.

Lynn said the SEC statute treats the SEC more like a zoning board where there are criteria, and some may or may not be met, not a list of things that have to be considered.

Glahn appeared to concede the point, but after oral arguments, Eversource New Hampshire CEO William Quinlan said his company’s contention has always been the SEC needs to finish deliberating and render a new decision.

Glahn said the SEC never did define region and other requirements making it difficult to determine what information was needed.

Lynn said with a project the size of Northern Pass, the idea of unduly affecting orderly development is in the eye of the beholder, but noted the legislature did not say what could be developed and what not, instead leaving that decision to the SEC.

Like the base closure commission, he said, lawmakers did not want the political responsibility.

Justice James Bassett asked Glahn what his client wanted from the court, to vacate the decision, to tell the SEC to go back and “do your job,”  to reopen the record, noting there are new members on the commission now who did not hear the original case.

Glahn said to go back and continue work, but not to reopen the record. He noted the record has been preserved and the new members could review the evidence and decide.

Counsel for the Public Christopher Aslin said the applicant has a “very high burden of proof” to meet the four criteria. If there is any doubt, he noted, then the burden is not met.

Lynn said Glahn advocated a presumption of approval, while Aslin is saying it should be denied if there is any negative impact. “Nothing would get built,” Lynn said.

“The burden is heavily weighted on the applicant,” Aslin said.

He noted his office does not take sides but does point out flaws in the applicant’s evidence like the credibility of witnesses, which the SEC agreed with.

Justice Anna Barbara Hantz Marconi noted the witnesses who were not credible in Northern Pass were credible in another transmission line case.

Aslin noted she was referring to the Merrimack Valley project, which he said was not controversial like Northern Pass.

“The burden of proof would change if it is controversial,” she asked, and he said, “No.”

Aslin and others argued there is nothing vague or arbitrary about the SEC’s decision that the statutes and committee’s rules clearly state what evidence is needed and the standards that will be used to decide the project’s fate.

They argued the determining factor was the lack of sufficiently credible and reliable evidence submitted by Eversource.

They said the SEC’s decision is supported by the record and Eversource has not demonstrated the decision was unreasonable or unlawful.

After oral arguments, Quinlan noted Northern Pass has federal approval, the only problem is at the state level. He said the company continues to stand behind the project noting the region needs more clean energy from Canada.

Quinlan said they would prefer the court sends the case back to the SEC, but if it does not, Eversource may consider reapplying.

Jack Savage, of the Society for the Protection of New Hampshire Forests, said there are other transmission lines approved or in the process of being approved, so there is no need for Northern Pass to cut through the state.

“The SEC did what it was supposed to do,” Savage said.

The court is expected to take three to six months or longer to issue its decision.