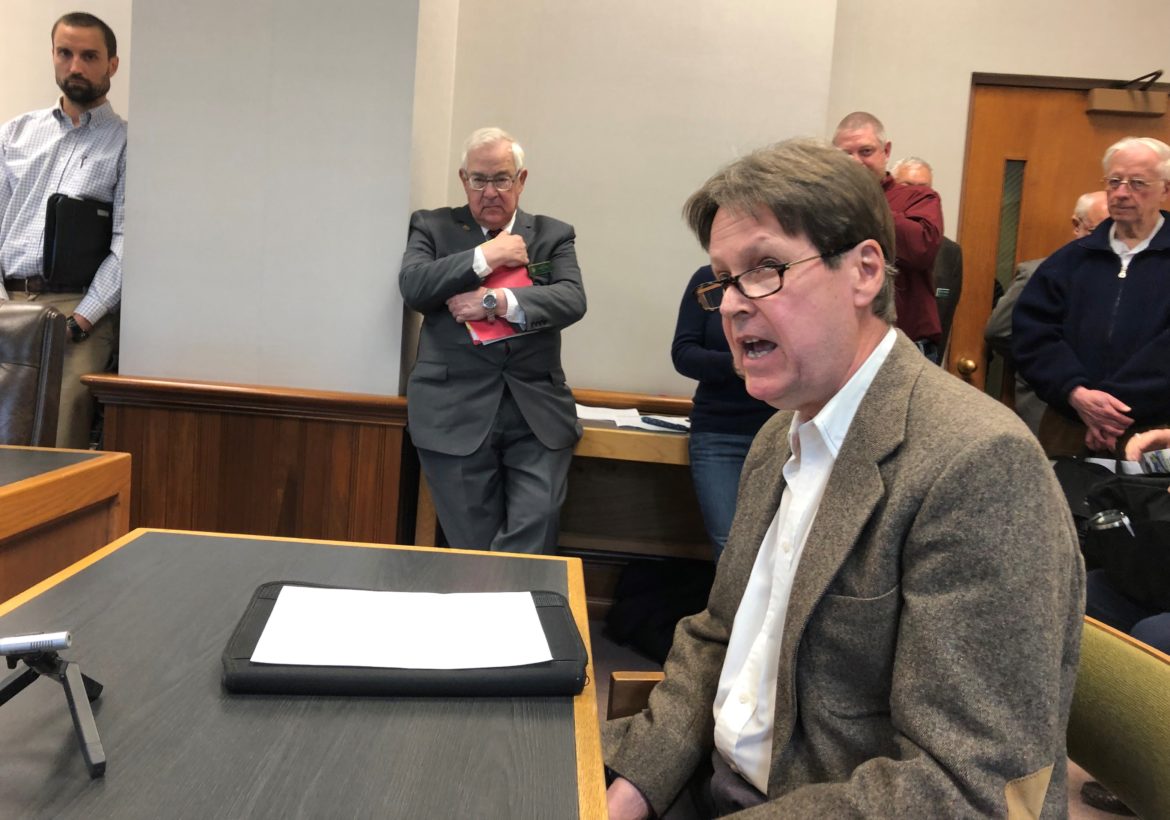 Douglas Souther of Bradford testifies in support of a bill that would allow property owner notification when roads are considered for OHRV use. In back is Sen. David Starr, R-Franconia.

CONCORD – Property owners along roads being considered for Off-Highway-Recreational-Vehicle use would be notified before select board hearings on such proposals under a bill that is gaining traction in the New Hampshire Senate.

An amendment to House Bill 591 was heard Tuesday before the Senate Transportation Committee. It would allow for a notice requirement to abutters prior to select board meetings on such proposals.

Many of the supporters of the measure were from the North Country where OHRV use has exploded. But there were also a number of property owners who spoke in favor of the bill from the towns of Bradford, Hillsborough, and Warner who are facing a boom in off-roading interest in the Mink Hills.

“We don’t want to become Ride the Wilds South,” Martin said, referring to the system of roads and trails in the North Country used by off-road enthusiasts.

Richard Harris of Colebrook said the development of the trail system in his area has exploded.

Harris said his town is now trying to take care of some “hotspots” where there are hundreds of OHRVs being used each weekend and not a lot of local or state enforcement.

Harris said it has changed the peace and tranquility of the North Country adding the Senate should “support this so people have a say.”

Douglas Souther of Hillsborough said abutter notification would allow for “a balanced and informed decision,” where now there is only the local off-roading group going to select boards to ask for permission to use some roads as trail connectors.

Not all who attended the hearing were supporters.

Starr called it “anti-ATV” and he warned that by passing the bill, which also includes some other provisions for updating OHRV law, it would be “killing the goose that still has some golden eggs.”

He said off-roading has become an economic lifesaver in his district.

Starr said he would be voting against it when it comes to the Senate floor.

Peter Roth of Concord, who owns property in Hillsborough, said the bill would allow for some balance that currently does not exist.

Roth acknowledged that passing the measure might make it harder for roads to be approved for such use, but it would not likely destroy the pastime.

The New Hampshire Municipal Association took no position on the bill.

If it passes, the bill would take effect 60 days after passage.