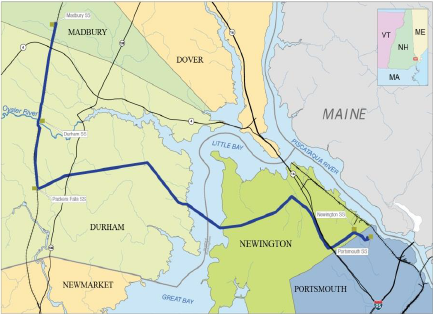 The 13-mile line will run from Madbury to Portsmouth.

CONCORD — In a preliminary determination, the Army Corps of Engineers announced last week the Seacoast Reliability Project will have significant impacts on federal waters, wetlands and fish habitat along and in Little Bay.

As a result, the Army Corps announced it will require a site specific “individual” permit rather than a “general” permit which would have left the bulk of the work to the state Department of Environmental Services.

The Corps announced a public comment period for the project that runs through May 8, and the Conservation Law Foundation and other intervenors have requested a public hearing be held as well.

The $84 million, 13-mile transmission line from Madbury to Portsmouth was approved by the Site Evaluation Committee in December and earlier this month regulators denied a rehearing request from the Conservation Law Foundation, the Town of Durham and a Durham residents’ group.

However, the project still needs federal approval by the Army Corps of Engineers for a wetlands permit and work in federal waters.

“Loss of this habitat may adversely affect species that use these waters and substrate,” according to the Army Corps press release. “The Corps has made a preliminary determination that site-specific impacts may be substantial. Accordingly, the Corps submitted an (essential fish habitat) assessment to the National Marine Fisheries Service for . . . consultation.”

“This is an important venue for considering the significant impacts that results from this project,” said Tom Irwin, vice president and director of CLF New Hampshire.

He said a significant concern is the “massive disturbance of sediment” by the use of the jet plow and hand jetting to install the cables under Little Bay.

With the quality of the bay already in decline, he said the burial method will have a significant impact on the eel grass and oysters in the bay by releasing considerable amounts of nitrogen locked up in the sediment.

Irwin noted that many communities around the bay have spent considerable amounts of money to reduce their nitrogen levels.

“We’re also very troubled by the proposed use of concrete mattresses that lie on top of portions of cable where they could not achieve four feet of burial in sediment,” Irwin said. “These concrete mattress will be laying on the floor of Little Bay in places that will be exposed at low tide. That is a dangerous precedent and interferes” with recreational and other boating.

But Eversource said the decision is not a surprise and should not have an adverse impact on the project, increase its costs or delay construction.

“The Army Corps has said that we can begin work in areas not covered by this permit, so the sequence of construction will change somewhat to prioritize uplands areas, the substations, UNH and other areas outside of the Corps’ jurisdiction until the permit is issued,” said William Hinkle, media relations manager for Eversource NH. “We have worked closely with all stakeholders – including the Army Corps of Engineers – throughout the siting and permitting process, which began before the current version of the ACOE State General Permit took effect. The Corps has kept us updated through that process, and we understand their determination that ultimately resulted in the need for the Individual Permit.”

He said the difference in content is minor between a general and individual permit for the project.

“The Corps has recognized that the Site Evaluation Committee hearings provided extensive review of the environmental issues at hand and included a robust opportunity for public comment and participation in the proceedings,” Hinkle said.

In making its decision to issue a permit for the reliability project — paid for by ratepayers across New England —  the seven-member SEC determined Eversource had met all four criteria laid out in law to grant a certificate to build the 115 kv, high-voltage transmission line.

Irwin said his organization intends to appeal the SEC decision to the Supreme Court and has until May 13 to file its request.