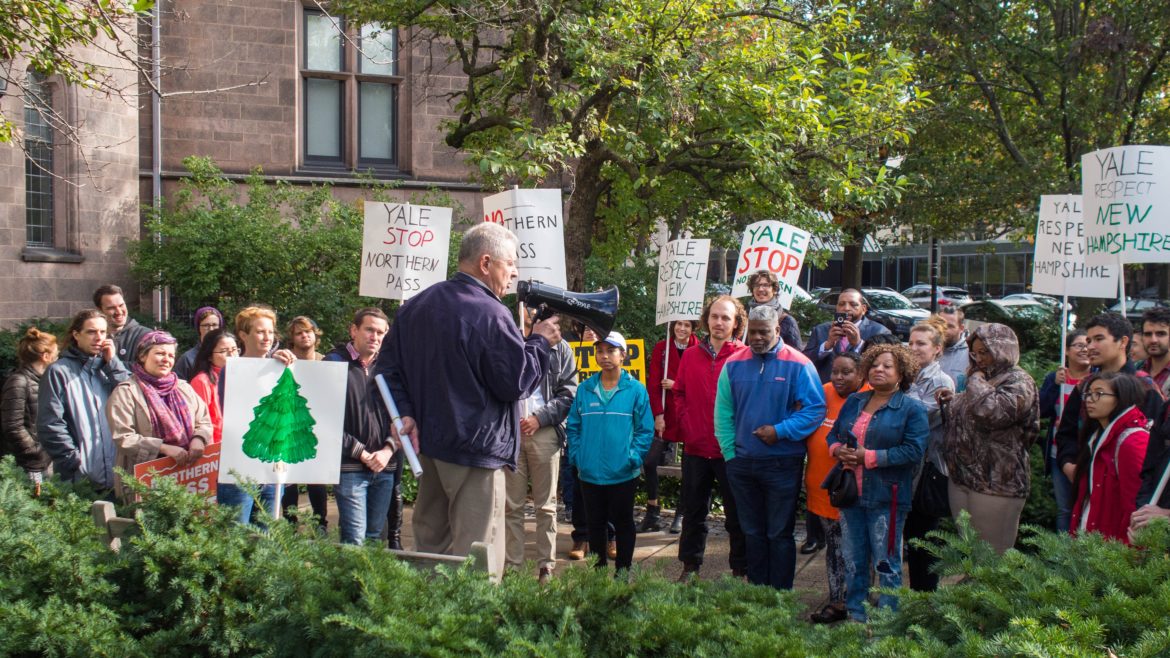 The following letter was sent to:

Communities in Northern New Hampshire view the Northern Pass project as a threat to their landscape, culture, and way of life. This perception motivated an extraordinary grassroots movement, in which working dairy farmers refused multi-million dollar offers for their land.[1] This left Northern Pass dependent upon Yale University and Wagner Forest Management, which leased land to Northern Pass for a viable route.[2] Despite Wagner’s willingness to undermine a firewall that residents created, citizens mastered thousands of pages of planning and zoning documents to defeat one of the largest utility companies in the United States.[3]

An indigenous group also viewed Northern Pass as a threat to their culture and livelihood.  Members of the Pessamit Innu traveled thousands of miles on multiple occasions to testify that Hydro-Quebec, the entity that would provide power to Northern Pass, “has violated principles enshrined in the United Nations Declaration of the Rights of Indigenous Peoples.” In an open letter to the University, Chief Simon wrote, “Yale University’s financial managers are on the verge of a decision with respect to the Northern Pass Project that will have an indirect, albeit major, effect on our Aboriginal rights.”[4]

After student, community, and indigenous leaders called on Yale to stop Northern Pass, Yale emphasized its limited control “from both a legal and best practices perspective.”  Yale further noted, “The Northern Pass project is undergoing rigorous review in the State of New Hampshire, under the purview of the Site Evaluation Committee.”[5]

On February 1, 2018 the Site Evaluation Committee (SEC) unanimously voted to deny a permit to the Northern Pass project.[6] On March 30, 2018, the SEC reaffirmed its decision in writing, and confirmed the concerns of communities in New Hampshire. The committee found, “Given the nature of the master plans and local ordinances along the Project’s route, the Project would have a large and negative impact on land uses in many communities that make up the region affected by the project.”[7]  The committee later denied requests for reconsideration.[8]

After the SEC’s decision, Eversource has continued to pursue the project, and state legislation changed the composition of the SEC. These changes prompted Dolly McPhaul, resident of Sugar Hill in New Hampshire, to argue, “There is a saying that goes, ‘If you can’t win using the current rules, change the rules.’ And so they [Eversource and Gov. Sununu] did.”[9] Eversource has appealed SEC’s decision in New Hampshire’s Supreme Court.[10] In addition, the New Hampshire Legislature passed Senate Bill 366, which allows the Governor to appoint five members from the public to the SEC instead of two members from the public.[11]  This bill gives Governor Sununu more control over the SEC.  Governor Sununu has received significant campaign contributions from Eversource[12] and has remained steadfast in his support for the Northern Pass Project.[13]

Governor Sununu’s use of this power has already proved controversial.  For example, Michael Vose, one of Governor Sununu’s recent nominations to the SEC, withdrew his nomination after it became clear he would not be confirmed by New Hampshire’s Executive Council.[14] Vose was a supporter of the Northern Pass Project, and Eversource was a top campaign contributor to Vose.[15] One opponent of Vose argued that his nomination represented an attempt by Sununu to “’pack the court’ with members who carry his agenda.”[16] Ironically, even though Northern Pass was marketed as a green energy project, Vose has vocally opposed a carbon tax in New Hampshire, a policy that is designed to address climate change and a policy that Yale University could credibly claim to have pioneered.[17]

Yale and Wagner could respond to these developments by arguing that Eversource is acting within the law.  Yet, if the project moves forward it will be in spite of an SEC process that Yale characterized as rigorous.   Moreover, Yale and Wagner agreed to hold themselves to a higher standard in community relations by seeking the FSC certification. Enabling and advocating for Northern Pass is a clear violation of the FSC’s principle number 4: “The Organization shall contribute to maintaining or enhancing the social and economic wellbeing of local communities.”[18] Afterall, the “large” and “negative impact” on communities “affected by the project” was the principal reason that the SEC denied the project’s permit.

When the Rainforest Alliance conducted an audit of Wagner’s management practices on the land it manages in New Hampshire, the auditors disputed stakeholders who talked about a negative impact on their communities.  A primary reason for disputing the stakeholders was that “The Northern Pass Project was not approved and will not proceed as originally laid out.”[19]  However, with Eversource’s continued efforts to seek approvals for the project and the changed composition of the SEC, this conclusion no longer holds true.

Moreover, Yale and Wagner should be holding themselves accountable to the standard of ethics articulated by Aldo Leopold, one of the most famous alums from Yale’s School of Forestry and Environmental Studies, “Ethical behavior is doing the right thing when no one else is watching – even when doing the wrong thing is legal.”  In addition to the SEC’s condemnation, faculty members and students that are affiliated with Yale’s School of Forestry & Environmental Studies have signed onto a petition calling on Yale to stop Northern Pass.  Its alumni have also signed onto this petition and have been some of the most prominent opponents of the project.

We are requesting that Yale University and Wagner Forestry Management honor Yale’s original public statement by recognizing the rigorous process that the SEC undertook and their commitment to the FSC principles.  We urge Yale and Wagner to terminate the lease that facilitates this project. At a minimum, we urge that Yale and Wagner respect the communities affected by this project by publicly disavowing their support for Northern Pass. We also urge Yale and Wagner to publicly ask Eversource to drop its current appeal in the New Hampshire Supreme Court.  Given Mr. Colgan’s testimony in favor of this project[20] and the ongoing lease to Northern Pass, silence implicates Yale and Wanger in the harm that this project would cause.

Finally, we remind Yale and Wagner of the FSC principle 7.6: “The Organization shall, proportionate to scale, intensity and risk of management activities, proactively and transparently engage affected stakeholders in its management of planning and monitoring processes, and shall engage interested stakeholders on request.”[21]  The signatories of this letter are interested stakeholders, and clearly management decisions over something as transformative as Northern Pass carry significant intensity and risk.  Under this principle, we expect a prompt response to this letter.