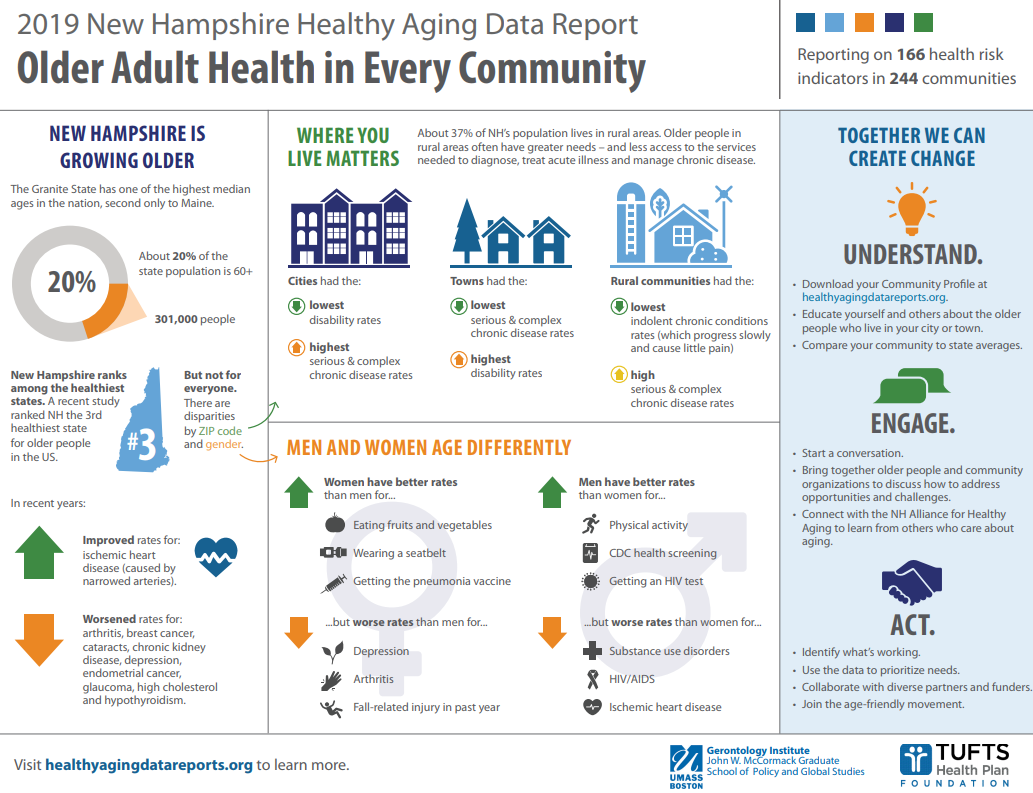 Much information has been collected on our senior population, but until now, finding that information all in one place has been impossible.

As of today, that has changed.

The New Hampshire Healthy Aging Data Report went online this morning (Tuesday, April 2, 2019). It was unveiled at a legislative breakfast at the State House and later in a conference call to journalists.  You can see the website at healthyagingdatareports.org.

People can look up their own city or town and find details about the older residents who live there: From what percentage have cancer, to how many have Alzheimer’s, to the number who have reported doing any kind of physical activity in the last month. The data report is also helpful in determining if your hometown is doing better or worse than the state average.

In some categories, that level of detail will be sobering for some communities.

The Granite State has the second-oldest population of all the states in the nation.  In another 11 years, one out of every five people in the United States will be over 65.

As Baby Boomers age, the needs within the community change, and sometimes how well we age in place depends on our Zip code. Thumbing through the reports by town or city reveals that clearly.

“This is going to revolutionize  how New Hampshire agencies, New Hampshire municipalities, the government all access information and now have it at their fingertips,” said Brinn Sullivan of the Portsmouth Senior Activity Center and president of the N.H. Association of Senior Centers. “I love the Healthy Data Report because in three clicks you can have your community profile, you go to the website and you click on community profiles and you scroll down to your town, in three clicks, and you can see all of this data as it relates to your own community, and I think that that’s a magical thing.”

AARP-NH volunteer Jim Isaak of Bedford helped explain the new website to legislators Tuesday, and he said the new service “gives you the option to identify where the opportunities are.” Isaak has personal experience with exploring the landscape for elderly services: His mother had Alzheimer’s Disease, and he sought help close to his hometown of Bedford.

“Without this data, we wouldn’t know where to look to find out what is going on,” he said. “If there are groups in town, that’s great, we need to make sure they’re visible. The second thing we can do with that is try and make sure that organizations in town – churches, senior care centers, nursing homes, whatever – are offering that service so people have that available to them and we can go from there.”

Sullivan said, “We haven’t had that. No town has had that. Every senior center in our state, every nutrition program, every library, YMCA, every memory café can go here and learn more about their community.”

The Healthy Aging Data Report takes the information on 244 New Hampshire communities and breaks it down into 166 indicators that give some insight into how well we are doing meeting the needs of our senior population.

The report is part of the website healthagingdatareports.org that has already featured data on Massachusetts and Rhode Island. New Hampshire now becomes the third New England state to have its data dissected, with more than 40,000 pieces of data making up the charts and maps on the website.

“Identifying and understanding the gaps in healthy aging will allow communities to continue to adapt, improving quality of life for all New Hampshire residents,” said lead researcher Elizabeth Dugan, Ph.D., an associate professor at the Gerontology Institute at the John W. McCormack Graduate School of Policy and Global Studies at the University of Massachusetts Boston.

Dr. Dugan led the project and told reporters that in neighboring states, the reports have already:

• Been used to convince Rhode Island legislators to provide discounted bus fare for seniors when gaps in public transportation were reviewed.

• Helped justify adding $1 million to the budget for health programs in senior centers.

• Resulted in expanded training and collaboration between mental health providers and aging service providers in Massachusetts.

• Provided evidence of the need for memory cafes or other community changes to support people living with dementia in the Bay State.

• Been used by the Massachusetts Department of Public Health to prioritize communities with high rates of asthma for a public education campaign.

The Tufts Health Plan Foundation funded the data reports, and Nora Moreno Cargie, president of the Foundation, said, “We know healthy aging is influenced by where we live, by how we work, health care access that we get and receive, and our experiences for daily living.” The reports provide a “deeper understanding of what people in our communities need and want.”

Sullivan noted, “I love that this is going to allow us to get more laser-beam focus into a variety of helpful and healthy projects that are going on in New Hampshire. We are an aging state. We are the second-oldest state based on median age and we need to be proactive and we need to understand the data that is telling the stories that we already know exists.”