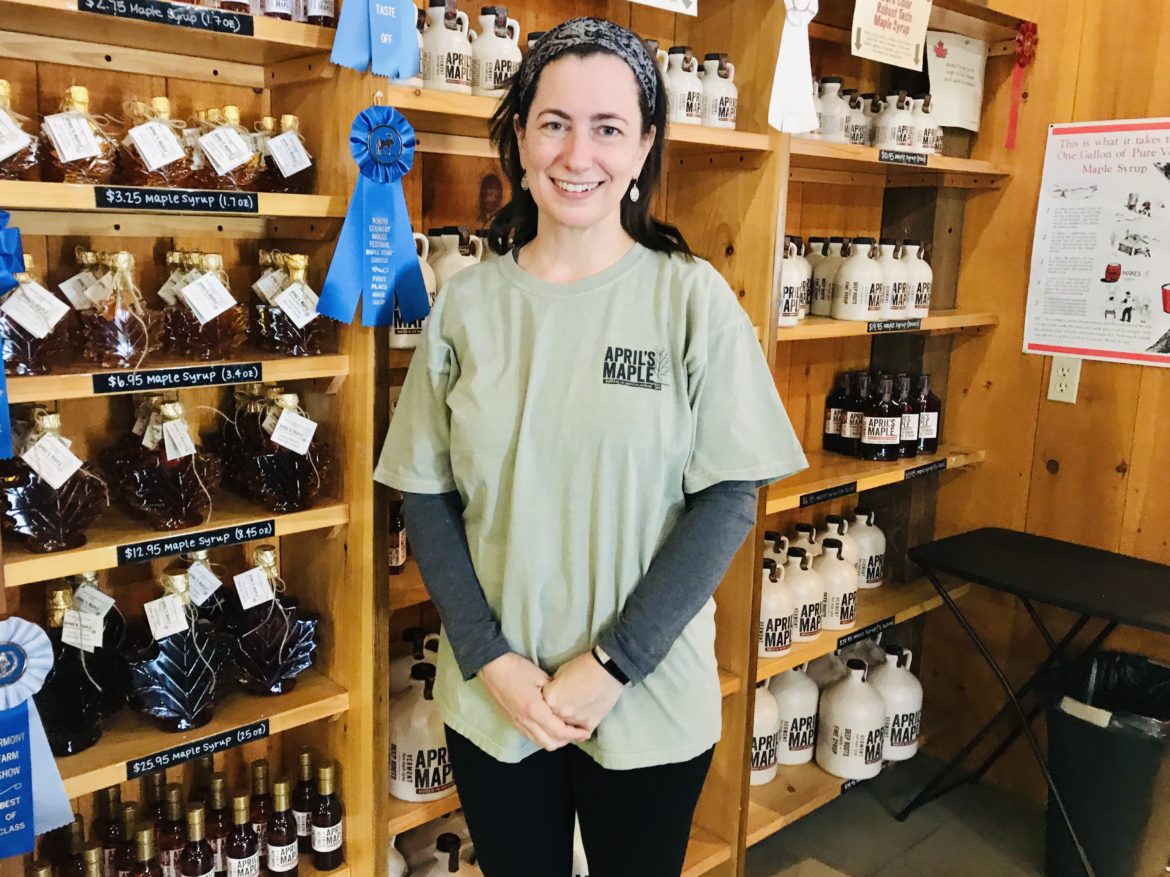 Welcome to InDepthNH.org POINTS NORTH, our reporting on North Country business and entertainment news and community event listings. We start each edition with a business feature so don’t forget to read to the bottom. If you know what’s happening, tell Rachael Brown at rachaelbrown@roadrunner.com.

There is one certainty in the maple sugar industry; each season will be different.

New England maple producers ride the roller coaster of change each season due to one major factor; the weather.

“This year has been so challenging. There has been so much snow. We have had to unbury some taps, dig up buried lines. The taps are high, up to chest and even head level, that when the snow melts we will need a ladder,” says April Lemay of April’s Maple in Canaan, Vt.

April’s Maple is tucked away in the Northeast Kingdom of Vermont, right over the New Hampshire border and 7 miles from Colebrook. Lemay runs April’s Maple sugar house, the café, gift shop and mail order business with the help of her husband, Sage D’Aiello, her mom, Donna, and dad, Serge, her aunts, brother, 17 employees in high season and 10 in low season.

“Each season is different. The last two years there were periods of stop and start. This year we haven’t started yet {as of March 3rd]. The storms are insane; the wind, the frequency of power outages is much worse and more frequent,” added Lemay, who is familiar with weather patterns, having grown up in Canaan.

Despite the challenges, Lemay says she has high hopes for a strong end of the month. Since owning the land in 2012 and business since 2013, she has learned to diversify and remain open all year long.

On a snow flurry Sunday, very early March, Lemay was on hand to tell her story. The café was teeming with snowmobilers coming in off the trail, warming up with breakfast – maple crunch pancakes – of course.

“My family owned the land, 813 acres. It was my grandparents and then my mother and her five sisters cared for it. The land was becoming a tax burden and we were thinking about what to do. We wondered if there were enough sugar maples on the property,” said Lemay, who at the time was living in Boxford, Mass., and a partner at Deloitte Touche LLP in Boston. Lemay graduated from Saint Michael’s College, went to work at Deloitte at 22 and became a partner at 32. She was there for 17 years and managed 200 consultants.

“I took a leave of absence from Deloitte, had some money to invest. It was important to us to preserve the land and keep it sustainable. I bought the land in 2012 and built the building in the fall. We started in the spring of 2013,” said Lemay, adding she never looked back.

How did Lemay, coming from an account executive background, learn about maple sugaring?

“I hired someone to help, Dave Fuller from Fuller’s Sugar House in Lancaster, he does installations, too. It is a huge process to set up. We have 13,500 taps. There are 300 miles of tubing,” said Lemay, adding being a partner at a firm is like being a small business manager and this was also helpful to her.

The work is divided between her mom, her husband and the employees.

“My husband is in the woods, he knows woods. He manages a Christmas Tree Farm. He checks all the lines for holes, tears, wear and tear from animals. Sometimes he is on snowshoes or the snowmobile, there is so much troubleshooting. Mom and I run the evaporator,” explained Lemay, adding her mom and dad were her first employees.

Here’s a little about how the maple sugar process works.

The sap runs when the nights are below freezing and the days are above freezing. Under those conditions their vacuum system kicks in.

There are two tanks, one at the state-of-the art sugar house and a 3,500 gallon tank, two miles up on Maple Sugar Hill. Once the tank reaches 2,500 gallons, the pumps begin to work pumping the sap 1.9 miles underground to the sugar house.

“Two thirds of our sap is pumped underground. There are a lot of parts if something goes wrong. The sap comes in at 2 percent sugar and 98 percent water and we get it to 13 percent sugar. We start to get rid of the water by a reverse osmosis machine, which is quicker than boiling,” said Lemay. Her dad runs the machine.

“My mom and I run the evaporator,” said Lemay. The evaporator is two pans filled with the concentrated syrup. The syrup pans are placed over a fire, heated to boiling. As the syrup boils, it becomes sweeter and sweeter.

Sugar houses typically run from mid-February to April and April’s Maple is open year-round. Just how did Lemay accomplish a year round operation?

“Living in a rural area producing maple sugar, we sell the bulk in spring. To make this business year round, you have to be creative. We started selling hot dogs and ice cream out of the evaporator room. Wow, it took off and we were much busier than expected,” said Lemay.

The food sales morphed into the café, which now offers breakfast and lunch, serving ice cream in cups, cones and sundaes and of course hot dogs- traditional, chili and maple dogs. Other café items include all day maple crunch pancakes, chili and soup, sliders, sandwiches, a house salad with maple vinaigrette.

“I think of it as a café, not a restaurant and we have all home-made food. It brings people in off the trails in the winter and summer camp visitors in the summer. We also have a mail order business that keeps us busy, with maple products and gift baskets, year-round,” added Lemay.

Lemay notes the importance of diversifying a business.

“We have to diversify or we wouldn’t be here. It takes a lot to run this business. The April Maple family is amazing and the North Country Chamber of Commerce [Colebrook] has been so supportive and helped me to reconnect in a small community. You need repeat business and local business,” said Lemay.

And: to employ people, to create the sizzle.

“As a small business, it is our responsibility and pleasure to employ people and stay fresh, relevant and diverse. You make things well, good and fun. This is where the magic happens,” smiled Lemay.

The NH Maple Producers Association announces New Hampshire Maple Sugaring month is running from March 9th to March 31st. The 24th Annual NH Maple Weekend will take place March 23 and 24th. Many sugar houses will be open for tours to show how their businesses run and will offer free syrup samples and other goodies.  NH Maple Producers is offering a Maple Month Sugar House Passport. Visit five sugar houses, who are NHMPA members, and be entered in a drawing to win prizes of NH made maple products.

Here’s how the season looks so far.

“Traditionally this is not such a slow start for the season, but it is slower than last year. The deep snow, especially up north has had an impact. The talk we hear is, we will need step ladders to reach some taps,” said Nick Kosko, president of NH Maple Producers Association, adding last year New Hampshire produced 163,000 gallons.

“Generally speaking, New Hampshire is fourth or fifth in the country for production of maple syrup. And right now we are praying for 40-degree weather,” added Kosko.

Bisson’s has been in operation since 1921. Lucien and Muriel Blais, third generation, boil sap in a wood fired evaporator. They offer maple syrup, maple products and are famous for their maple taffy-“tire” in French. Bisson’s is open Maple Weekend for tours, offering maple sundaes and will boil, weather depending.

Dave and Patti Fuller began maple sugaring in 1972. Dave learned the art from his grandfather. Brothers Ed and Russell, along with grandsons, Isaac and Trever, are official taste testers. Products are sold in the Lancaster store. The sap is collected from 18,000 maple trees in Lancaster where it is piped through tubing to the sugar house in Jefferson. They boil 360,000 gallons of sap, which makes about 8,000 or 9,000 gallons of syrup.

Derek Patry started small by tapping a few trees in 2010. By the summer of 2012, he and his wife Alicia opened the sugar house and started producing for the 2013 season. They have 400 taps; they usually boil after 5 p.m. Their children, Alivia and Sawyer, help out.

Bradley Presby, fifth generation maple producer and as he says, a “Yankee inventor,” started tapping last Sunday, March 3rd and may wrap up Saturday, March 9th.  Presby has 2,000 taps and produces 400 to 500 gallons of syrup. He still has his great-, great-grand father’s sugar pans. Before his grandfather passed away, he asked Presby to continue the tradition. “I started when I was 10 years old, am now 65, so 55 years of maple sugar. I am addicted and love to talk maple,” stated Presby.

Participants explore their own small business ideas from brainstorming and ideation through business model generation, business planning and feasibility studies. This module is hands-on and production oriented and utilizes an assortment of tools and methods to isolate key success and risk factors.

No charge, but please register 24 hours in advance of the workshop. https://ic.nhsbdc.org/reg.aspx?mode=event&event=55390011

The Bretton Woods Nordic Center invites snowshoe enthusiasts to the Shoes and Brews tour series, taking place on select Fridays throughout the ski season. Explore the snow drifts and the high country trail system with experienced guides and take in breathtaking views of the Presidential Mountains and discover new corners of our winter wonderland. At the end of the tour enjoy a well-earned beer and a mountain view by the fire.

Wildcat Mountain offers full day lift passes for just $17 each St. Patrick’s Day, a lucky deal if ever there were one. The mountain also plays host to festive events that day, and you may even be able to hunt down a pint or two of green beer to keep you warm.