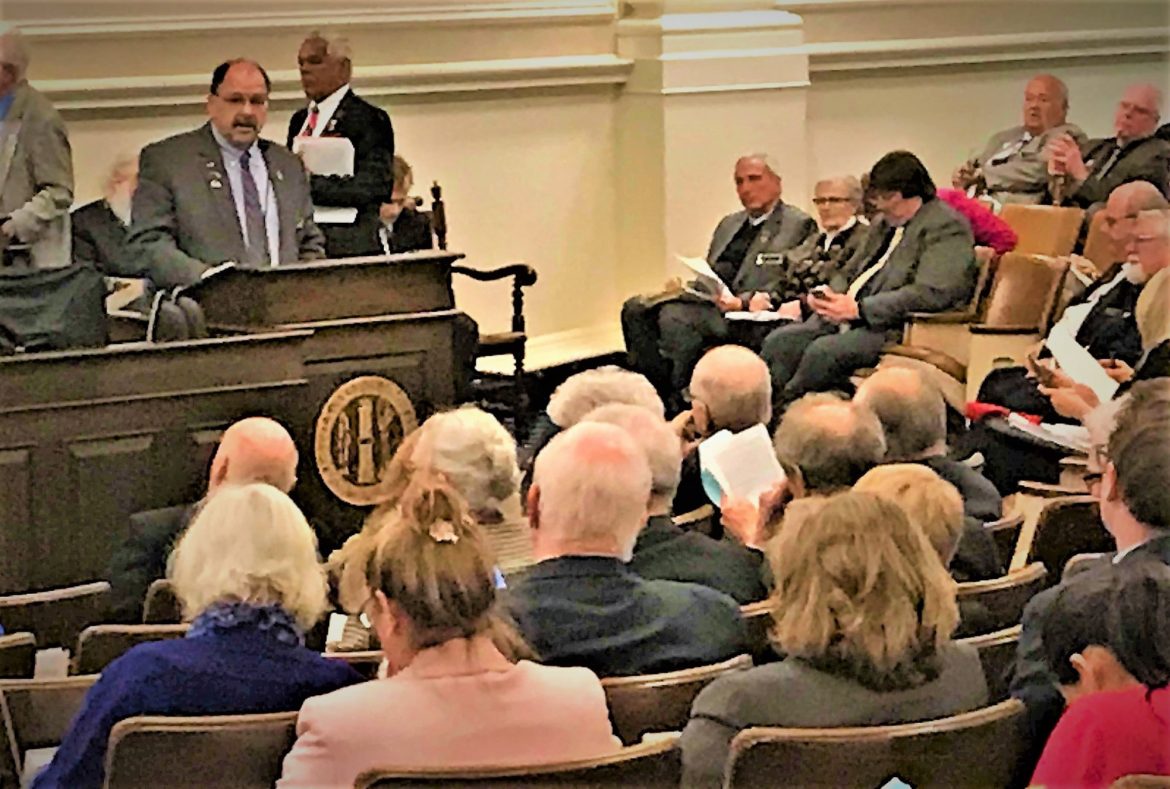 Rep. John Burt, R-Goffstown, argues against a bill that would ban guns in safe school zones.

CONCORD — The recreational use of marijuana was given the nod of approval by the House Wednesday as were a series of bills on education funding and one prohibiting firearms in safe school zones.

The House has a deadline Thursday to act on bills that need to go to a second committee such as those with appropriations and taxes or fees, or changes in criminal sentences.

The House approved several bills to change the education funding formula and increase the state’s obligation to pay for an adequate education.

With some school districts in financial crisis due to an annual 4 percent reduction in state stabilization grants, addressing education funding has gained momentum this year.

A number of bills introduced in the House and Senate would halt the reduction in aid, but one passed Wednesday would restore the money school districts lost over the past three years, according to committee chair Mel Myler, D-Hopkinton.

He said the legislature has not really addressed the issue head-on since the state Supreme Court ruled in the Claremont education lawsuit that the state has a responsibility to provide an adequate education and to pay for it.

One bill, House Bill 551 establishes a school funding commission to determine the cost of an adequate education today and suggest a formula to distribute state aid.

He said the commission is comprised of lawmakers as well as members of the public and education and other professionals.

The commission will look at “how to provide an adequate education to all students regardless of the zip code they live in,” Myler said. “We need to change the way we fund schools. In all candor, we have the same funding disparity in our school districts, the same that was there 28 years ago.”

Rep. Rick Ladd, R-Haverhill, tried to change the bill to a legislative committee, which he said could accomplish the same thing but without the $500,000 price tag.

His amendment was defeated on a 199-156 vote before the House voted 207-148 to initially approve the the bill, which now goes to the House Finance Committee for review.

House Bill 177 was approved 250-96 without debate. It would halt the 4 percent annual reductions in stabilization grants and restore funding back to its original level. It would also restore the money school districts lost when the grants were reduced by 4 percent annually.

The bill will go to the Finance Committee for review before a final House vote.

Also going to Finance for review after a 262-82 vote is House Bill 709 which recreates a fiscal disparity aid program to help property-poor districts that have difficulty raising money for education, among other things.

The bill was amended to require property-rich communities that raise access money under the statewide education property tax to pay that money to the state to redistribute to property-poor communities. Currently the communities retain the excess funds.

The House Finance Committee will hold public hearings on the bills before deciding whether changes are needed.

The House gave initial approval to House Bill 481, which would legalize, regulate and tax the recreational use of marijuana on a 209-147 vote.

Supporters said the bill would end an 84-year failed war on marijuana and bring New Hampshire into line with the rest of New England.

Others said legalizing the drug would be a boon to the state’s economy as it has in states where it has been legalized like Colorado and Washington.

But opponents said the drug has become more potent, is addictive and harmful to young people, and will not have the desired effect of eliminating black market sales.

And several opponents said there is no way to determine when someone is impacted by marijuana when driving as there is for alcohol.

Manchester firefighter, Rep. Stephen Pearson, R-Derry, said he has witnessed the effects of the state’s opioid epidemic at ground zero under the department’s Safe Station program.

“Legalizing another drug is not how we find our way out of this drug crisis,” Pearson said. “This bill would sanction a drug culture.”

He spoke about going into an apartment and having a three-year-old tell him her mother was dead in the bathroom.

Rep. Patrick Abrami, R-Stratham, chaired a legalization study commission that produced 54 recommendations but not one on whether cannabis should be legalized.

Speaking against the bill, Abrami said: “This is not your grandpa’s marijuana any more,” noting the potency is much greater than it was when he was young.

“I’ve seen marijuana, I have been around it, I have ingested it,” he said. “New Hampshire is behind the times on this. We should have done it yesterday.”

Last week, Gov. Chris Sununu reiterated he would veto the bill if it comes to his desk.

The bill goes to the Ways and Means Committee to review and work on the taxation method.

The House initially approved its version of paid medical and family leave that would allow for up to 12 weeks of paid leave at 60 percent of salary.

Supporters said House Bill 712, which passed on a 199-133 vote, would allow someone to sit with a dying family member or to spend time with a newborn child without worrying about returning to work or under pressure from an employer.

Rep. Harrison Kanzler, D-Conway, said the bill “will give you the option to sit with your loved ones to say, “I love you. Goodbye.”

He said the bill would give people the time they need to either take care of their own medical problems or to spend time with sick or dying relatives.

But opponents said the bill has serious flaws both in the way the system would work and constitutionally.

“This is an income tax,” said Rep. Jack Flanagan, R-Brookline. “Some say payroll deduction, but it is an income tax at .5 percent.”
He said he supports family and medical leave but could not support the bill as written.

Much like Senate Bill 1, which the Senate passed earlier and had a House hearing this week, HB 712 would be funded through a .5 percent payroll deduction from employees of companies without a leave plan.

The bill has been a cornerstone of the Democrats’ agenda for this session and was a major issue in the 2018 gubernatorial race between Gov. Sununu and Democrat Molly Kelly.

Sununu joined Vermont Gov. Phil Scott earlier this year to announce their own medical and family leave plan to provide up to six weeks of leave at 60 percent of salary for state workers. The plan would be administered by a private firm.

Private companies could join the states’ plan eventually but would not be required to offer the benefit as the House and Senate plans propose.

During debate, supporters pushed back against contentions the bill would establish an income tax saying that either the employee or employer would pay the premium like they do other insurance premiums.

Opponents also said they could not support using general fund money to start the program or having an unelected state commissioner determine what the fees should be.

The bill goes to the House Finance Committee for review before a final vote by the end of March.

The House initially approved House Bill 680, which would bring vaping and e-cigarettes under the state’s tobacco regulations on a 203-153 vote.

Bill opponents said it would be the death of a number of small businesses that specialize in vaping products by imposing the state’s 65 percent tax.

And they said vaping has helped people end their addiction to tobacco.

But supporters said the bill would bring state regulations into the current environment of more and more young people vaping and moving on to tobacco products.

She cited recent statistics that show more and more students are vaping, which leads to the eventual use of tobacco products later in life.

“There has been an increase in conventional tobacco use,” she said, “tragically reversing years of decline.”

The bill will now be reviewed by the House Ways and Means Committee before a final House vote.

The House also gave initial approval to House Bill 511 that would regulate the practice and would limit the product’s sales to those 18 years old and older.

Exceptions are for trained personnel authorized by school administrators and parents picking up or dropping students off as long as their firearms remain in their vehicles.

Rep. Charlotte Dilorenzo, D-Newmarket requested a vote on what she said was disorderly conduct.

The House voted 225-104 for her motion and Burt publicly apologized saying it was his one flub in nine years in the House.

Others said the bill is a good first step in the right direction to protect students from what has happened in other schools in the country.

Rep. David Doherty, D-Pembroke, said, “This bill is a positive first step toward safer schools.”
The bill will be reviewed by the Criminal Justice and Public Safety Committee before a final vote in the House.

House Bill 616 provides a cost of living increase to retirees in the state retirement system for the first time in many years.

House Bill 706 establishes an independent commission to draw the political boundaries for state and federal office after the 2020 census.

House Bill 452 establishes the First in the Nation Presidential Primary Commission to ensure the state retains its current status with the first presidential primary in the selection process.

House Bill 518 would repeal statutes that allow the Department of Corrections to bill inmates for the cost of their care.

House Bill 652 requires all professional school employees to have at least two hours of training in suicide awareness and prevention annually.

House Bill 420 restricts the naming of state facilities, buildings, roads and bridges to people who have been deceased for at least two years, but exempts the university and community college systems from the restriction.

House Bill 729 establishes an ombudsman position to decide right-to-know disputes. The bill is referred to the Finance Committee before a final vote.