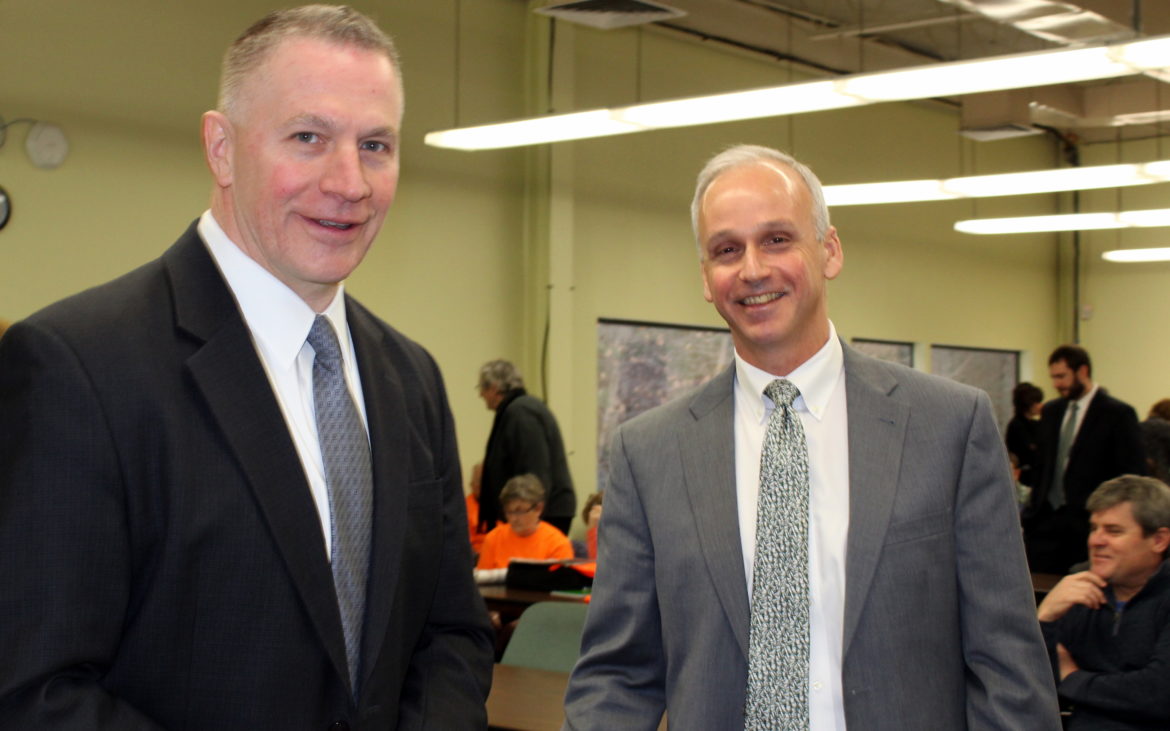 Eversource NH president William Quinlan, left, is pictured with Northern Pass attorney Barry Needleman during one of the deliberative sessions in January 2018 in Concord.

In a brief filed Monday, the attorneys reiterated many of the arguments raised in the utility’s request for a rehearing before the SEC in its appeal to the state Supreme Court.

The company contends the SEC failed to do the work required under statutes and its rules, strayed from normal regulatory procedures, made an arbitrary and unreasonable decision, and failed to weigh the project’s benefits against its undue impacts.

“Instead, in its haste to be done, it elected to cut short deliberations, seize on the Applicants’ purported failures to satisfy hitherto nonexistent burdens of proof, and concluded that it had no obligation to go further,” writes attorney Wilbur Glahn, who will argue the case for Eversource before the court later this year. “This resulted in an unlawful, arbitrary and unreasonable decision.”

The Site Evaluation Committee determined the utility failed to meet it burden of proof that the project would not unduly impact the orderly development of the region, saying company experts on tourism, property values and land use were not credible.

The SEC deliberated on two of the four criteria and found Eversource failed to prove the project would not harm the region’s orderly development. Because of that finding, the committee voted to halt deliberations on the remaining two criteria and deny the project a certificate.

However, Eversource has contended regulators should have continued to deliberate as the project’s benefits to the state and proposed conditions and mitigations would outweigh the impact on orderly development.

“This finding is unprecedented: neither the SEC nor a subcommittee has ever denied an application based on a failure to satisfy the burden of proof or failed to consider mitigating conditions,” Glahn writes. “In another departure from the Statute and SEC precedent, the SC (subcommittee) also refused to consider whether proposed conditions offered by the state agencies, Applicants and CFP (Counsel for the Public) would adequately mitigate any impacts. This arbitrary decision making was neither lawful nor reasonable.”

In its filing the company claims as it did in the 70 adjudicative hearings held on the project, Northern Pass would provide “an uncontested $1.5 billion in benefits.”
However, many intervenors and the CFP said the benefits would be less and in some areas impossible to determine in the absence of convincing evidence.

One major disagreement was over the project’s impact on the forward capacity market, which financially rewards electric generators that agree to supply power in three years to offset concerns about future supply.

While the company said it would provide millions of dollars in savings to consumers annually, the SEC found there may be little if any benefit.

The company said regulators failed to define or explain what burden of proof would be necessary to satisfy its requirements or where it could be found in law or rules.

“Put simply, it imposed a burden that amounts to ‘we know it when we see it,’” he wrote. “The SEC used the burden of proof issue as a convenient tool—its deus ex machina—for avoiding the hard work of defining terms, considering all evidence and ruling on undue interference with ODR (orderly development of the region).”

“The SEC’s deliberations occurred more than two years after the application was filed. Until then, expediency was not a concern,” Glahn writes. “Yet during deliberations, and after what is likely the longest and costliest administrative proceeding in the State’s history, expediency took center stage. Principles of law, of precedent, of fairness and reasonableness were all casualties.”

Northern Pass was initially chosen for the Massachusetts clean energy project to bring Hydro-Quebec power to the Bay State, but was abandoned in favor of a similar project through Maine after New Hampshire regulators turned down Eversource’s application.