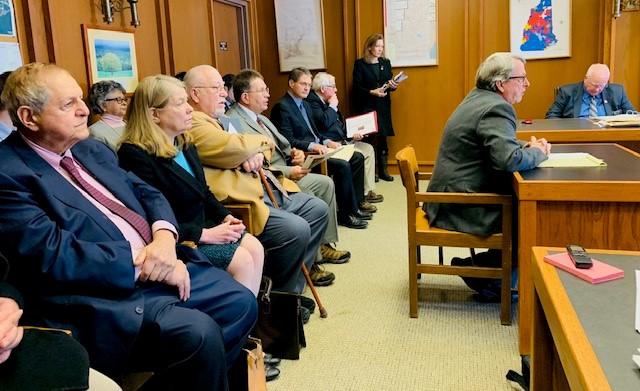 CONCORD – Berlin Mayor Paul Grenier testified before six different legislative committee­­­­s this week before heading for House Science, Technology and Energy on Wednesday in support of a bill that could advance North Country Growers’ plan to build a $58 million hydroponic greenhouse.

Sponsor Rep. Larry Laflamme, D-Berlin, introduced House Bill 635, which he described as enabling legislation for a combination agriculture and power generation business to enter into a payment in lieu of taxes agreement with the city of Berlin.

“The project is important to the economic development of the city of Berlin and the rest of the state,” Laflamme told the committee.

“For Berlin, this job-creating project will be the largest since the building of the federal prison,” Laflamme said. “It’s a jobs bill that would benefit an economically distressed municipality.” The project is expected to create 80 jobs.

The high-technology greenhouse expects to grow 8 million pounds of tomatoes and 15 million heads of lettuce a year for the New England market.

One committee member asked why the legislation is needed. Couldn’t Berlin enter into a PILOT agreement with North Country Growers without it?

“It will give us a much-needed tool for this project to happen. It will expand the city’s tax base,” Wheeler said.

Berlin has the second-highest tax rate in the state at just over $39 per $1,000, which Wheeler said is not an easy sell when trying to attract new businesses.

“This is exactly the kind of tool we need to do that,” Wheeler said of the proposed legislation. “Economic development in the North Country is challenging. Opportunities are few and far between.”

“The first thing that comes to mind is weed,” Cali-Pitts said, getting a laugh from the committee, adding: “Happy smoke.” If the bill passes and marijuana becomes legal, could the growers switch crops? she asked. Laflamme said he didn’t know, but Wheeler later said marijuana couldn’t be grown there because of its proximity to the state prison.

Marguerite Piret, the project’s chief financial officer, conceded that getting funding has been challenging and investors want the kind of predictability that a PILOT would bring. The project has firmed up $33.2 million in funding, but still needs $24.75 million, Piret said.

Committee member Rep. Troy Merner, R-Lancaster, said he was concerned because Richard Rosen, CEO of parent company American Ag Energy, who attended the hearing and briefly testified, has missed several deadlines and still hasn’t closed on the property the project is buying from the city of Berlin.

“A year ago (Rosen) wanted to change to more of an organic product. That was his first request,” Merner said.

After the project received $25 million from the United States Department of Agriculture Rural Development, Merner said Rosen said he was providing such a great project that he wanted $100 million. “Ever since then, I’ve been skeptical,” Merner said.

Mayor Grenier said he wasn’t particularly hopeful about House Bill 392’s chances before the House Municipal and County Committee. The bill would require the state to make an annual payment-in-lieu-of-taxes to the city for the state prison.

After attending a meeting on the bill, Grenier said he expected the committee would vote to recommend it be killed.

“The feeling that I got when I left the hearing was that it wasn’t that popular,” Grenier said.

“It was a stretch,” Grenier said. “I just wanted to make my education plight before a different committee. It’s tough sledding.”

The bill would have required the state to make a payment in lieu of taxes based on the assessed valuation of the Northern New Hampshire Correctional Facility and the city’s local school tax rate, which under the current valuation would be about $423,754.

The other hearings Grenier attended during the week mostly dealt with education funding. While the legislature is dealing with a number of bills about changing how education is funded in New Hampshire, Grenier has faced closing the last elementary school in the city, Brown Elementary School.