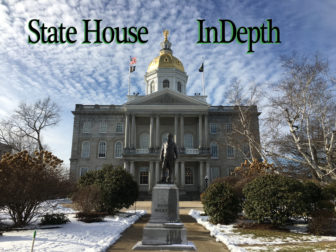 “One of the problems the state of New Hampshire has to deal with is very high electric rates,” said Sen. Jeb Bradley, R-Wolfeboro, the prime sponsor of Senate Bill 57, which would reduce the utility property tax 25 percent a year, and eliminate it by fiscal year 2024. “Lowering electric rates has been somewhat problematic.”

The legislature lowered business taxes and the booming economy provided significant revenue surpluses, he noted, so now is the time to repeal the utility property tax which would help lower electric rates.

“We can afford to phase out the utility property tax, and lower electric rates,” Bradley said, “and not impact local property taxes.”
While the bill is sponsored by eight of the 10 Republican Senators, it did not have the backing of Ways and Means Committee member Jeanne Dietsch, D-Peterborough, who said there are other ways to reduce electric rates, particularly by reducing demand.

“You’re ignoring the best way to reduce energy costs,” she said. “The cost will increase if you do not do that regardless of the utility property tax.”

And she noted the revenue currently goes into the Education Trust Fund.

“The money doesn’t come from nowhere,” she said, “it comes from somewhere,” adding it would be better to use the surplus money to help struggling school districts.

When it was instituted, the utility property tax took what had been collected as local property taxes and sent it to the state, meaning communities with large generating facilities had to raise additional local revenues to replace the money, sending property taxes higher.

Currently the statewide education property tax raises $363 million, which is money that stays in the communities where it is raised. Some property wealthy communities raise more money than they need, but they do not send the surplus to Concord to be distributed to property poor communities as was done when the education funding plan was developed in the late 1990s to address the Supreme Court’s Claremont education decisions.

Several community assessors testified on the bill, noting it is difficult to determine how repealing the tax would affect local communities.

Jim Michaud, Hudson’s chief assessor said it is difficult to determine the impact of the repeal but it would apply to other utilities not just electric companies.

And Goffstown’s chief assessor Scott Bartlett said he has been concerned the utility tax is not equitable because it did not track the statewide education tax rate.

If that were the case, using recent figures the rate of the statewide education property would be reduced from $2.06 per $1,000 to $1.99. Including the utility would produce an additional $12.6 million, Thomas noted.

The bill was backed by the Granite State Taxpayers Association.

The Senate committee did not make an immediate recommendation on the bill.