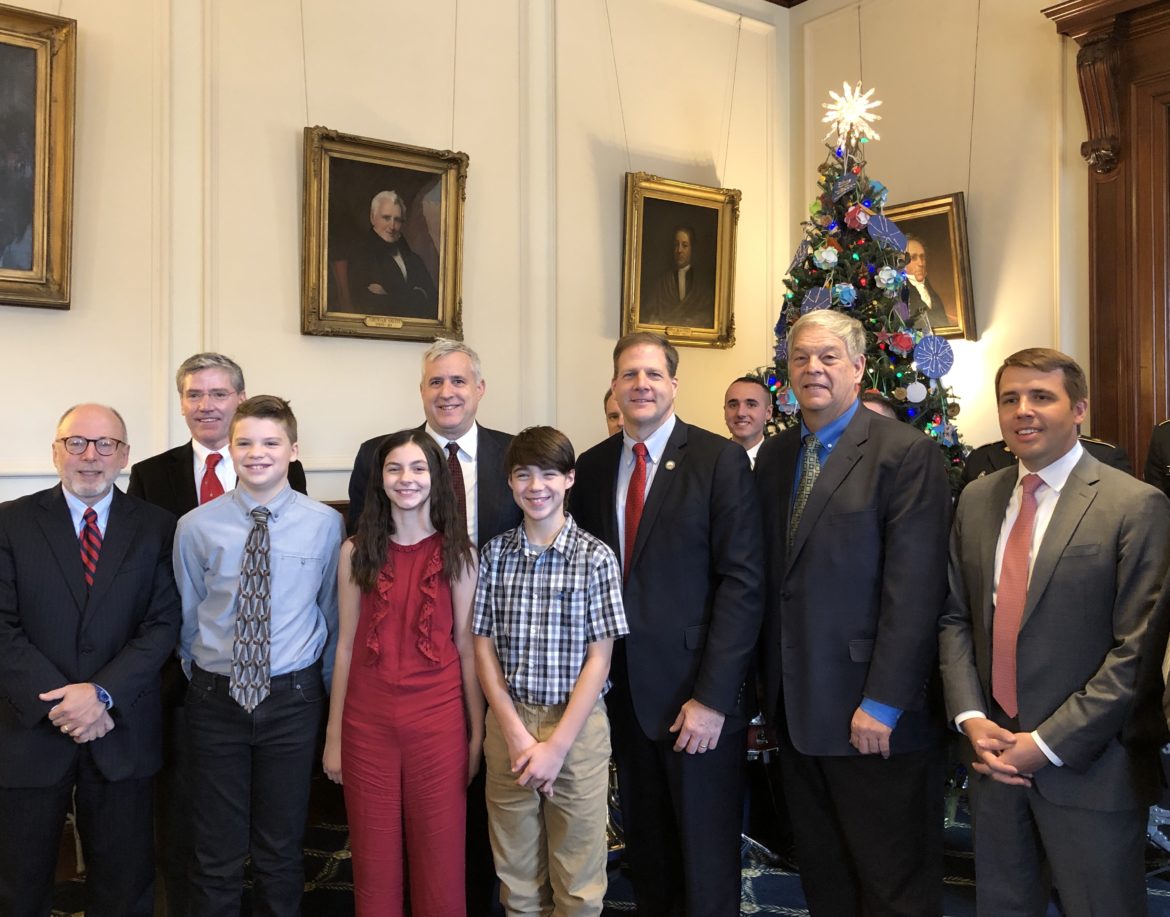 Students from the Jennie D. Blake Elementary School in Hill were on hand yesterday when the Executive Council voted unanimously to spend $100,000 from the federally funded State Energy Program for efficiency upgrades. (Gail Ober, InDepthNH.org photo)

CONCORD – Voicing concern for the future privacy of children born exposed to drugs, the Executive Council voted against giving the Bureau of Vital Statistics $45,000 for computer-system upgrades to collect the data needed for a “plan of care” for each child.

At its regular meeting Wednesday, the Executive Council also approved three amendments to the lease of Mount Sunapee State Park to Vail, paving the way for some possible private development of the West Bowl area.

And no vote was needed after Gov. Sununu’s pick for the Site Evaluation Committee, former Rep. Michael Vose, withdrew his name. Critics had mounted a campaign against Vose calling him a climate change denier who had been in favor of the Northern Pass transmission line, which the SEC turned down earlier this year.

Supporters of the data upgrades for drug-exposed children included Health and Human Services Commissioner Jeffrey Meyers who said the information would remain confidential but is needed to comply with federal regulations.

Opponents said storing such sensitive information in electronic databases that could possibly be breached presents a future risk to all infants born who exhibit withdrawal symptoms.

“I’m still not convinced that the child’s status (should) be in vital statistics for the life of the child,“ said Democratic Executive Councilor Andru Volinsky, referring to the database that is managed by the state Bureau of Vital Records.

Republican Councilors Joseph Kenney and Russell Prescott joined Volinsky making the argument that the privacy controls that allow a mother to “opt out” or not participate in the data collection program may not be completely understood by mothers, especially those in labor.

“I would be more comfortable with an opt-in provision,” said Kenney.

Meyers said the collection of the drug data is now required by state law since Senate Bill 549 was signed into law in June of 2018. He said the state also needs to comply with federal reporting regulations as established by the Child Abuse Prevention and Treatment Act.

“We have a statutory responsibility to protect this information,” said Stephen Wurtz, director of the Division of Vital Records Administration. “Just like any other birth record, it’s confidential.”

“That’s sensitive stuff,” replied an unmollified Kenney who said that people’s privacy is being threatened daily by the dissemination of sensitive information.

Meyers replied that without this information, the state cannot establish a plan of care for these children, circling back to the recently adopted legislation.

Following the no vote, Volinsky told InDepthNH.org he would ask some state senators to revisit some of the privacy protection components of the law. He also agreed that in a budget the size of the Department of Health and Human Services’, it is possible that the $45,000 could come from a different under-expended line item.

“But I did call attention to it,” he said.

In other action, the council approved the three proposed amendments to the lease of Mount Sunapee State Park to Vail, paving the way for some possible private development of the West Bowl area.

While two of the amendments passed without any discussion, one amendment was opposed by Prescott and Volinsky who said that there was not enough state oversight for future private development.

Prescott said that the ability to develop newer and more modern facilities on the now undeveloped West Bowl could devalue the existing Mount Sunapee assets that currently provide revenue to the state.