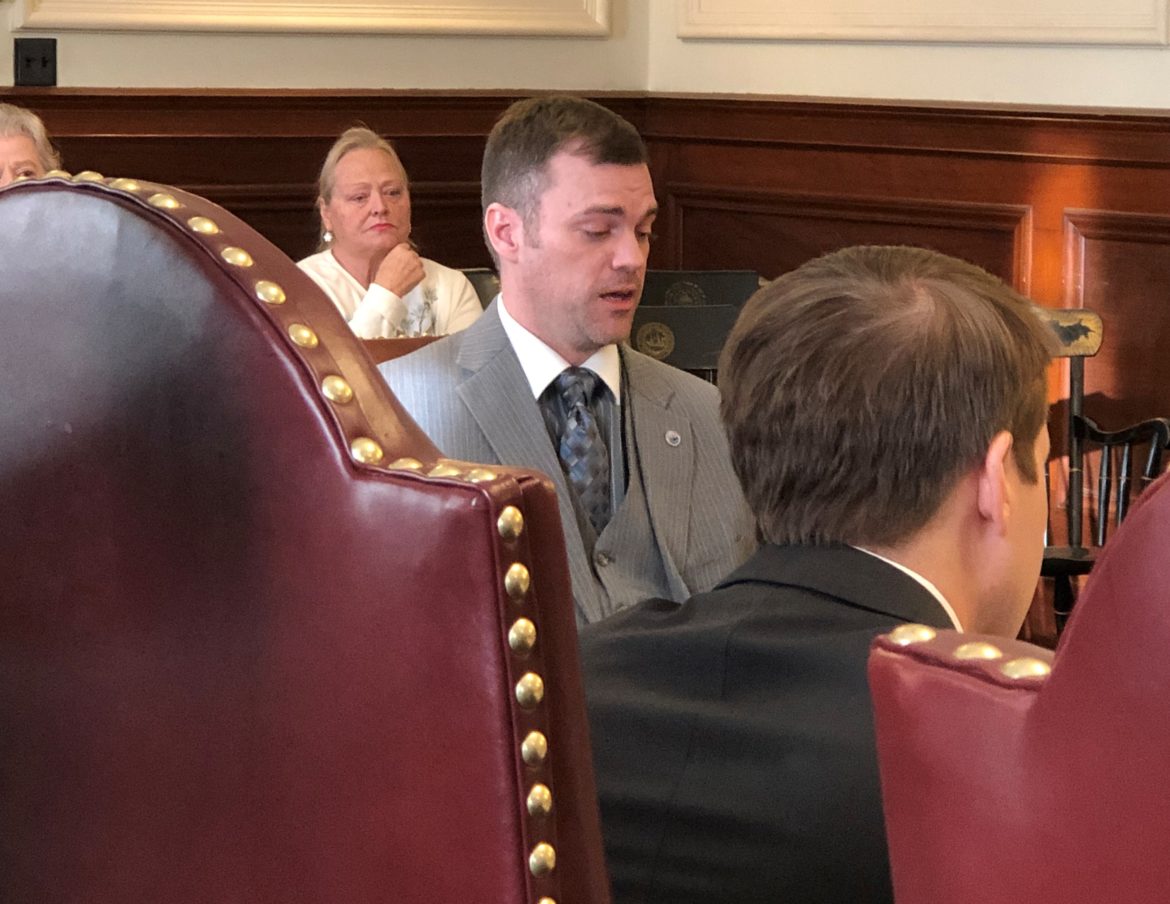 Joe Barton is pictured at the Governor and Council hearing on his pardon petition on Dec. 5.

CONCORD – Politics collided with criminal justice on Monday when former Newmarket GOP Committee Chairman Joe Barton made his case for a pardon to the Governor and Executive Council regarding his resisting arrest conviction during the 2014 elections.

Barton, who is no longer chairman, told councilors that his arrest was not justified and that he believed it was in part influenced by politics claiming that the arresting officer’s cousin was employed by the Obama administration.

“This is just my opinion,” said Barton in reply to Democratic Councilor Andru Volinsky’s request for some evidence of partisanship. Barton added that he believed his arrest was “prearranged.”

Barton was a GOP poll challenger in Newmarket during the 2014 election. The incident began when he challenged a voter who failed to provide proper identification to the clerk and she called the state Attorney General’s Office for information about the then-recently passed Voter ID law.

Inspector Peter Favreau responded from the Attorney General’s Office, but had testified in Circuit Court that he thought he was responding to the Newmarket Town Clerk’s challenge to Barton’s poll-challenger credentials.

Barton said he thought Favreau, who was wearing a suit that day, was at the Newmarket polling place to offer advice on whether the voter in question was allowed to cast a ballot.

During a heated discussion, a scuffle ensued and Barton was charged by Newmarket police with four related misdemeanor charges – three of which were dismissed.

During the trial, Favreau said he identified himself as a police officer and showed his badge during the argument, however Barton said Monday that he had no idea that Favreau had arrest powers. Barton also said he didn’t know he was going to be arrested until he was on the ground under a pile of three or four police officers.

Barton told councilors three of his ribs were cracked during the altercation. Barton appealed the resisting arrest conviction to the New Hampshire Supreme Court, which upheld it.

His claim for the extraordinary remedy of a pardon is that the charges never should have been brought in the first place. He said a pardon is intended to “correct errors made by judges.”

He said he has worked at the shipyard since 2006 and is currently working on a submarine project in Pennsylvania.

Barton’s attorney Jared Bedrick explained that Barton is not yet eligible to petition for an annulment, but wanted some relief soon rather than wait until 2020, which is the earliest he could apply.

Bedrick said the criminal process took four years because there were continuances and motions filed during the initial case as well as a time-consuming appeal to the Supreme Court.

The Council didn’t deliberate, but could make a decision as early as next week.