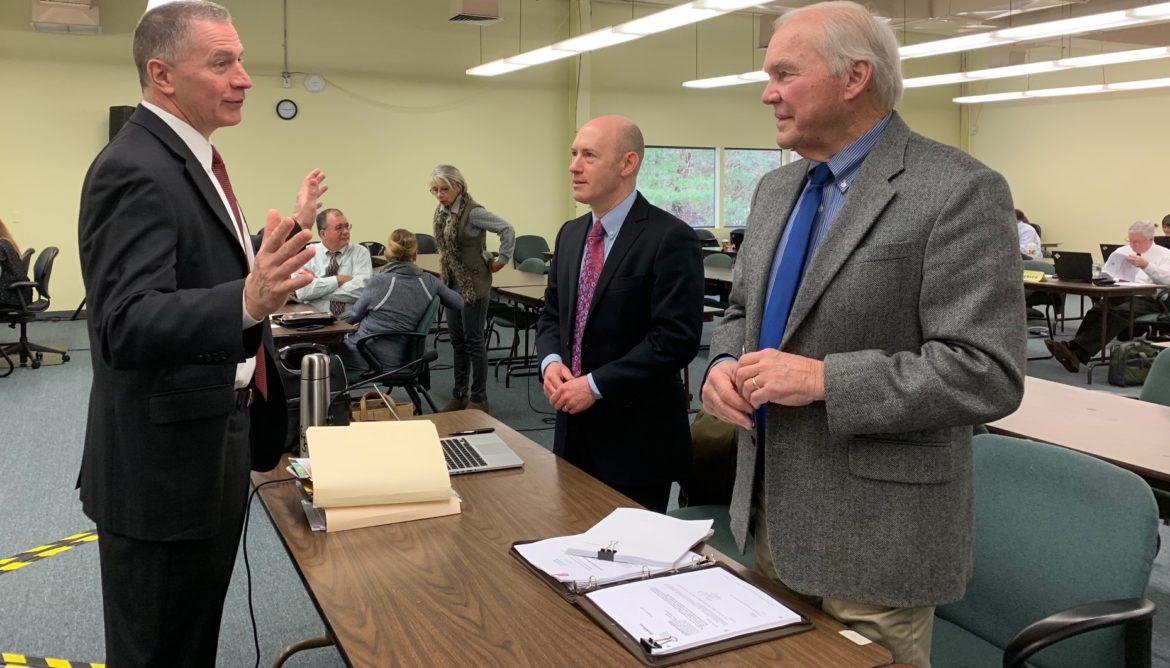 The seven-member Site Evaluation Committee subcommittee that will make the final decision made fast work of deciding that the project’s developer Eversource has the financial capability to construct the project.

There was some discussion about whether Eversource has the technical and managerial capability – especially regarding subcontracting the submarine portion of the line beneath Little Bay.

But a committee straw poll ultimately agreed that it does have the capability with the caveat that at this stage, the vote it is nonbinding.

“It’s not over until it’s over,” said SEC Chairman Patricia Weathersby.

The developer’s financial capability is just one of four criteria laid out in the law that the project must meet to obtain a certificate to build.

The committee must also weigh the project’s impact on aesthetics, tourism and the environment and decide whether it will impact orderly development of the region. The project must also be found to be in the public interest.

By mid-morning Wednesday, the committee moved on to considering the project’s aesthetics regarding a number of sites that had been the subject of complaints, starting with the crossing of Little Bay, an estuary drivers traveling along Route 4 from Durham to Newington would see while crossing the Scammell Bridge.

The committee reached consensus that the one-mile crossing of Little Bay, including up to 8,000 square feet of concrete mattresses and transition towers, does not rise to the level of having a significant adverse or unreasonable aesthetic impact on Little Bay.

“That is a point that Durham and Newington and other intervenors had argued that it would have an adverse impact,” said Durham Town Manager Todd Selig, who represents Durham and University of New Hampshire as intervenors in the proceedings.

“The committee today appears to have taken the opposite perspective and that is very significant in their deliberations,” Selig said during a break.

Much of the controversy surrounding the project concerns the underground section through Little Bay, the method that will be used to place the cable, and the section through Durham.

Deliberations involve committee members talking publicly with each other about testimony on the project. There were only a handful of residents from the Seacoast towns most affected by the project at the first day of deliberations.

The room at 49 Donovan St. in Concord that sometimes saw a full house during similar proceedings for Eversource’s Northern Pass Transmission project before it was denied was mostly empty.

The committee will take no more testimony and work during deliberations to decide whether the project has proven all four criteria set in the law.

Martha St. Amand of Newington attended part of the morning session. “I thought it was decided already,” St. Amand said during a break. “The people don’t want it.”

St. Amand said she lives right on the bay and is concerned about the project’s impact on the environment and the view.

“It’s bad enough we have to hear all the planes,” St. Amand said, referring to air traffic at Pease.

Eversource says the line is needed to address the growing demand for electricity in the Seacoast area. Eversource officials contend without the project, rolling blackouts may occur.

The committee will meet Thursday to continue discussing the project’s aesthetics. And continue deliberating Dec. 3, 6, 7 and 10 at 49 at Donovan St. in Concord.