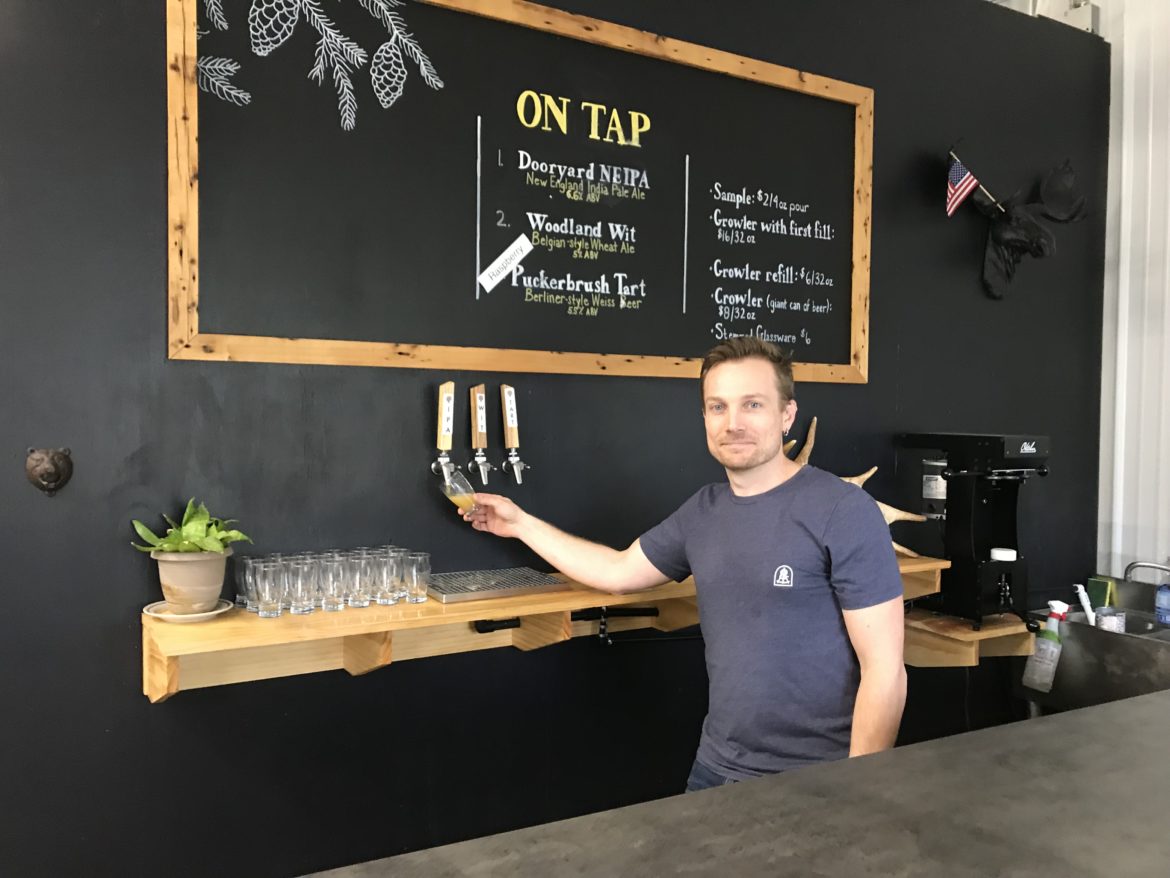 BYOB: Be Your Own Boss, Entrepreneurial Tales From The North Country

Copper Pig began pouring and serving food in the refurbished 1903 vaulted Lancaster Bank building at 1 Middle St. by the Israel River in Lancaster, in April 2018.

Coos Brewing opened shortly after, also in April, operating out of a renovated two-bay garage at 13 Merrill St., in Colebrook, and Rek-Lis Brewery released their brews and pub menu on Columbus Day 2017 at 2085 Main St., Bethlehem in the building, which has been home to four other restaurants.

Three brewers share their excitement, their passion, the culture of beer and the paths they took to brewing. 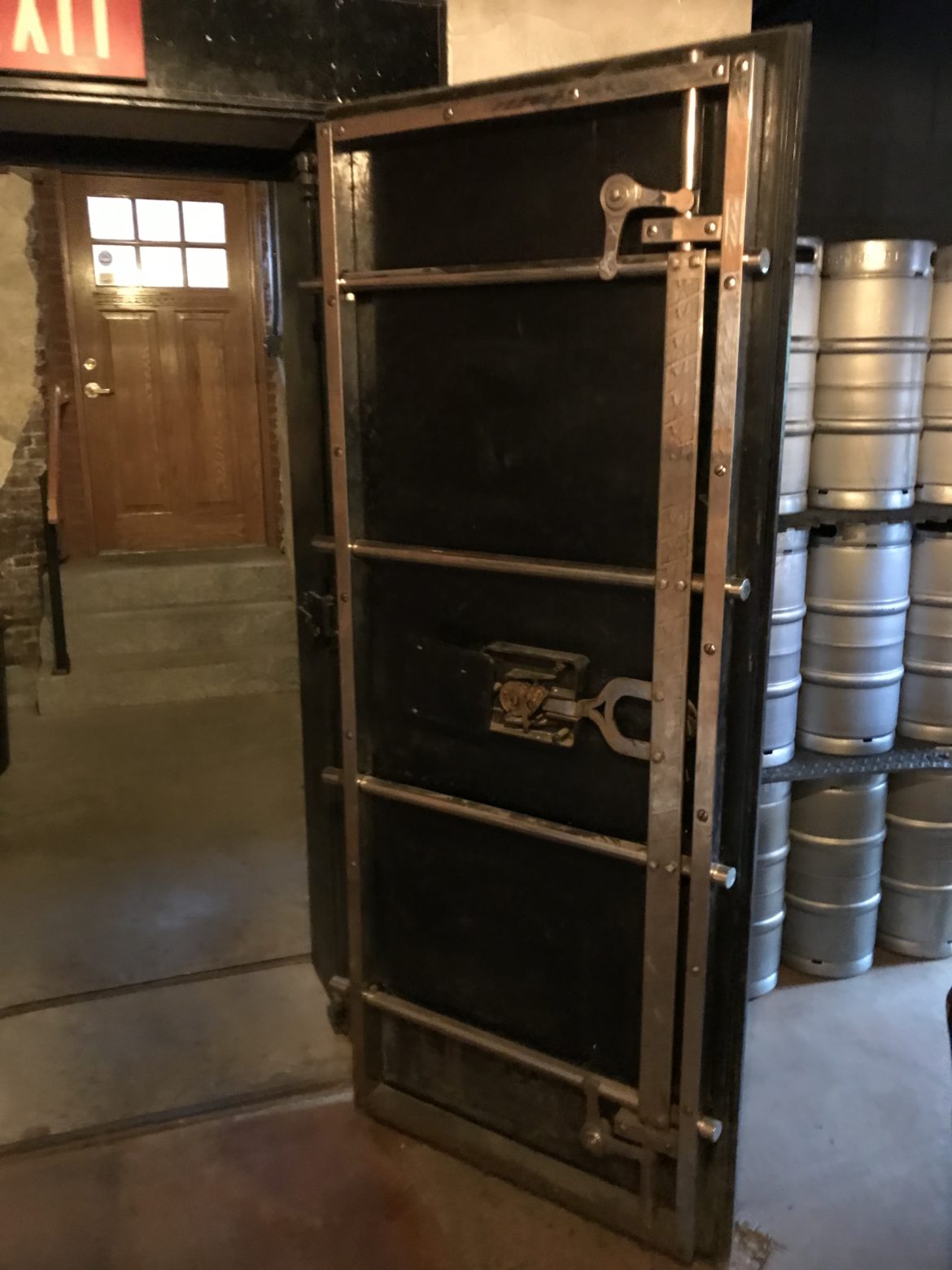 The original vault doors of the Lancaster Bank still remains in the Copper Pig Brewery.

First, a little about the business of beer in New Hampshire.

“I have spent 10 years tracking the New Hampshire Brewery scene, traveling all over the state. The small nanobreweries are just now popping up north,” said Glenn Knoblock, author, scholar and historian, who recently presented a talk at Castle in the Clouds, “Brewing in New Hampshire: An Informal History of Brewing in the Granite State from Colonial Times to The Present.”

“Craft breweries began out west, in Washington State and Denver, back in the 1970s. The concept made its way east and even though breweries have been a part of the state’s history since the 1860s, didn’t emerge in New Hampshire until the 1980s,” explained Knoblock.

“Trends take longer to reach North Country, whether it be Uber, Lyft or the food truck business. Now, New Hampshire has more breweries than Vermont. We are heading to the eighty mark,” said Knoblock.

To put that number in context, back in 2013, the Brewers Association estimated there were probably only 93 in the whole country. Knoblock added he likes to see the North Country involved, breweries bring in some tourism dollars, though it is hard to measure.

New Hampshire was another first in the nation when in 2011 legislation, RSA 178:12-a, was passed to recognize and license small batch breweries classifying them as nanobreweries. Nanobreweries differ from microbreweries by the number of brewed barrels allowed. A nanobrewery is defined as producing no more than 2000 barrels a year, while a microbrewery can produce up to 15,000 and a large brewery produces greater than six million.

This new legislation opened the gates for smaller craft brewers to sell and distribute their beer.

“I was there in Woodstock (Woodstock Inn Station and Brewery) when (then-governor) Maggie Hassan signed the bill (HB253), allowing the smaller groups to self-distribute and sell beer to their customers,” said Knoblock. It was also reported that Hassan opened a bottle of the beer, which was named after her.

“New Hampshire had an odd distribution system, the retailer wholesaler is set by the state, with one distributor, Budweiser who sells at the same price to mom and pop stores as to supermarkets. The smaller brands would get lost,” explained Knoblock.

The craft breweries can self-distribute and are changing the narrative, he added.

“Anecdotally, I think there is more consumption and more breweries than twenty years ago and it used to be beer drinkers were classified as male, aged twenty to fifty. Now when I lecture about beer there are many young women and people of many ages. I like beer and at home I probably have ten different kinds. It is almost like I have a wine cellar,” stated Knoblock.

Now back to the breweries and what they are drafting. 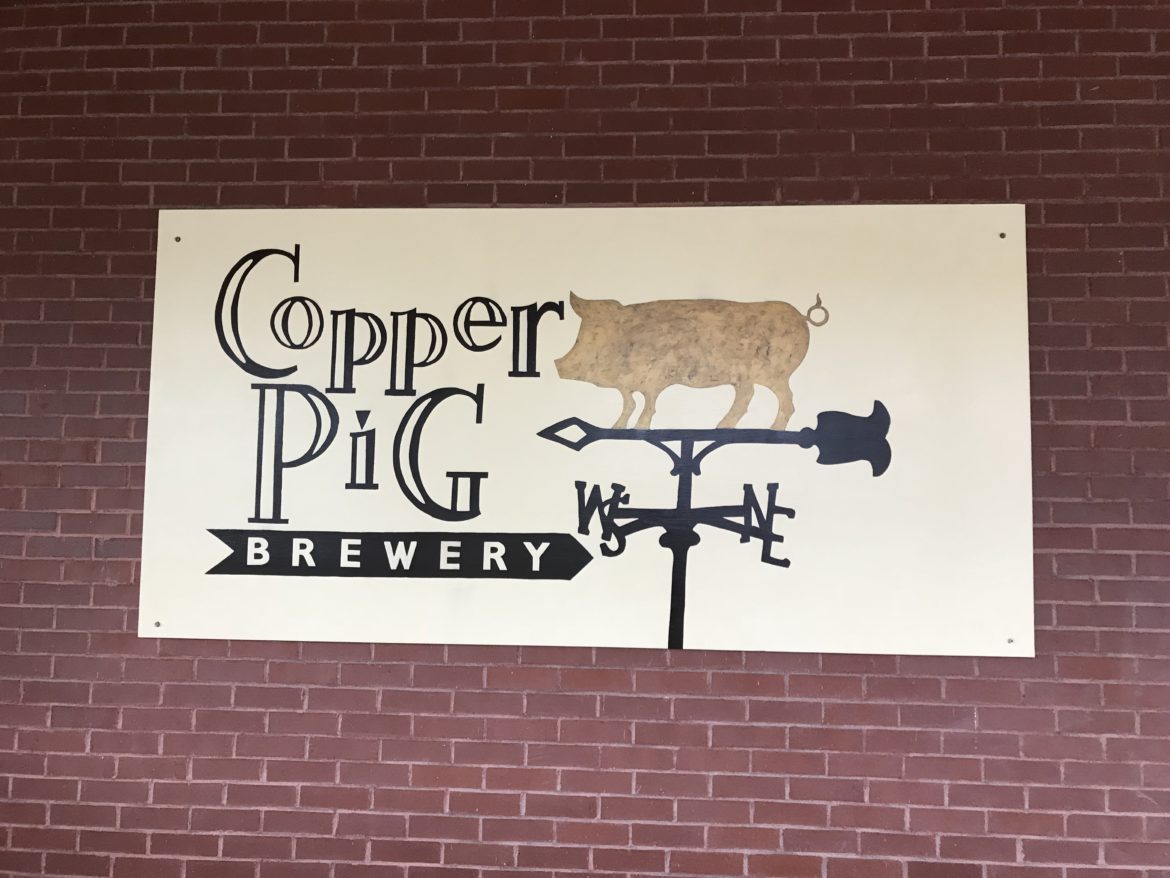 Owners Michael Holland and Darrell Bodnar of the Copper Pig Brewery began brewing in Bodnar’s Groveton kitchen 22 years ago. Bodner, who is from Groveton and Holland, who hails from across the river in Guildhall, crafted extract batches of water, hops and liquid malt.

“I am a chef by trade, having graduated from the Culinary Institute and would tweak the brews with different grains and barley,” said Holland, who just left his day job as chef at Weeks Hospital in Lancaster. Holland and Bodnar met at Weeks Hospital, where Bodnar is the IT Director.

When they were home brewing, they had six taps in Bodnar’s kitchen and used to host a Memorial Day party and a bonfire in the fall.

“About eighty to ninety people would show up and friends would say, you should do this for a living,” said Holland, speaking from the pub area of the brewery.

And that’s exactly what they did, but certainly not without the help of a supportive community.

“We thought outside the box for funding. We have personal loans from local businesses and the community. We pay them back quarterly, at a favorable rate and a rate better than the bank’s interest rate would be for them,” said Holland, adding how important Greg Cloutier, local businessman and part of the revitalization of downtown Lancaster, was to the project.

Investment monies helped refurbish the lower level of the old Lancaster Bank building, where the beer is brewed in stainless steel vats, the old vault doors are still being used in entrance ways, the pub seats about 50, with additional seating outside by the Israel River. The patio is adorned with outdoor heaters and a fire pit. Copper Pig has a nano plus brewing license to include the preparation and serving of food. Holland says now the food sales have surpassed the beer sales.

“Our founders bring their families in. It makes them feel invested. The atmosphere is like the old mead hall. People mingle and make friends over beer. Beer is the liberator of truth,” smiled Holland adding their motto is, “The best beer in the world is in my hand.”

Some of the beer offerings are Lars 007, Double IPA, named after one of the founders, Ice Jam Lager, a Czech pale lager named after the Israel River ice jam in 2018 and Kilkenny Irish Red, named after the mountain range close-by.

“We are riding the wave of beer. I think beer tourism is focused on small individual breweries like Europe, each town has its brewery,” added Holland. 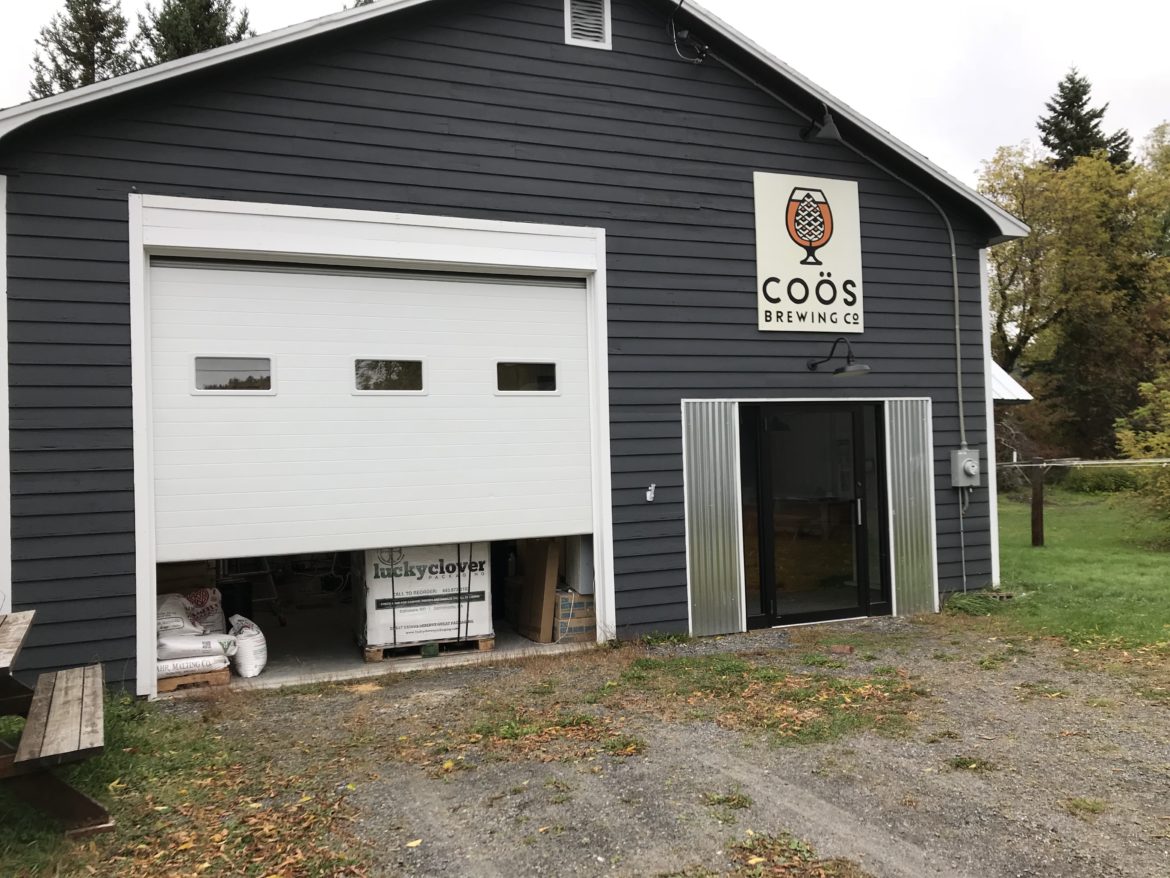 Colebrook is another town claiming fame to its own brewery. Colin Finn, who hails from Columbia – the next town over – opened this past April. Finn, as he says, runs the brewery all by himself.

Finn followed a similar but different path beginning as a home brewer 15 years ago.

“I was home brewing and wanted to be a pro. I was able to intern at Hill Farmstead Brewery in Vermont, where there is a high level of craft discipline and then come home to no good beer,” says Finn, who is a nurse by day/night at the local hospital. 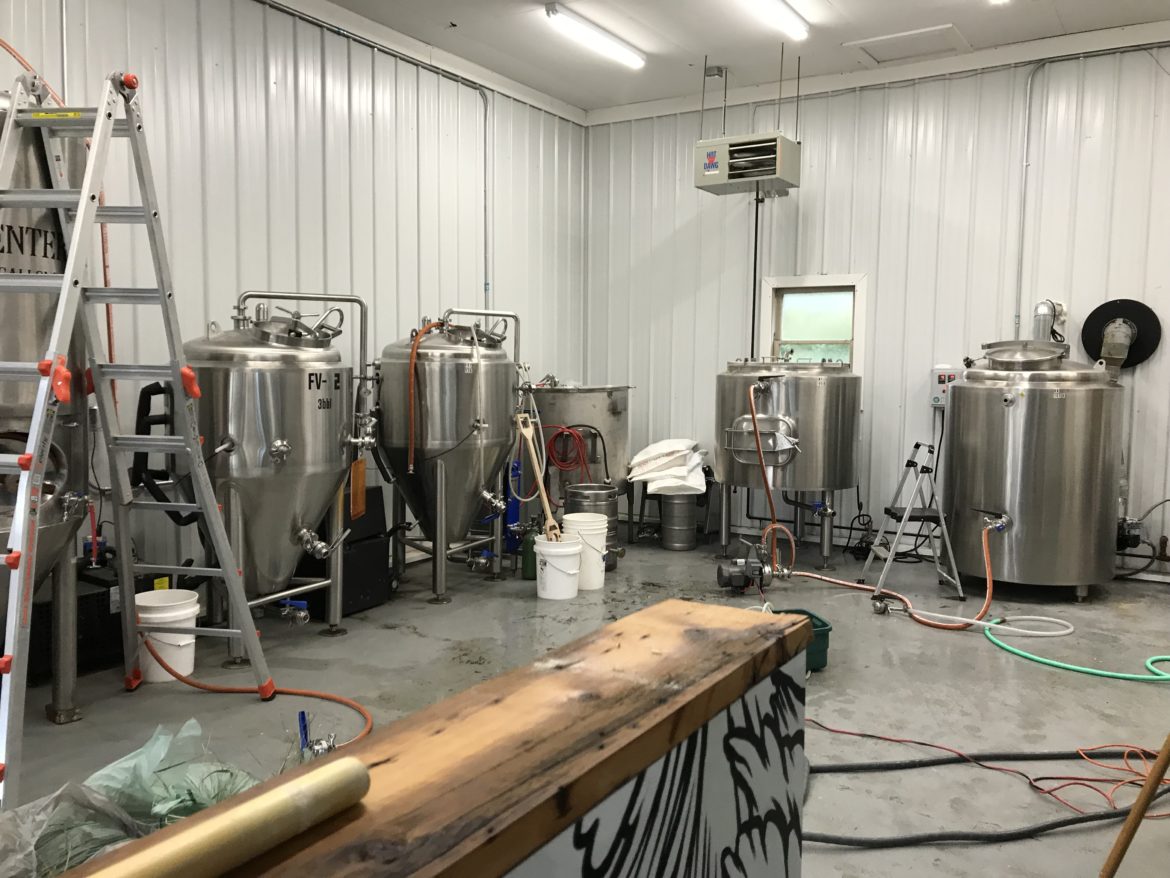 The beer fermenting system for Coos Brewery. A batch takes two to three weeks to ferment.

Finn went before the town planning board, told his story, was approved and earned his state and federal licenses, which are required of nano-brewers.

Coos Brewery sits in a renovated two-bay garage on a side street in Colebrook.

“I met with a Realtor, it was important that I had water and drainage. I was told there was good news and bad news with the building I am in now. The good news, it met my requirements, the bad news there was a house attached,” said Finn. Turns out the house was good news, Finn has a tenant which helps covers the cost of operations. Finn invested all his own money.

“This is a very financially industrialized project and expensive. I did this out of my own pocket. I had a desire to appeal to the local beer drinkers, to get them to accept craft beers,” said Finn.

Accepting the taste of craft brews for long time-beer drinkers is challenging for all the brewers. Holland says customers would ask, “What is closest to Bud Light”? He crafted a smooth lager, wheat based with a little hop.

Finn gets asked the same question.

“I had to design beers that would appeal to local beer drinkers, to accept craft beers. After all, the big beer distributors push Budweiser products, said Finn.

Finn says he is not a chef and does not serve food. His nano license is for distribution. And in the brewery, it is standing room only where customers can taste beer from the three taps and purchase growlers to go.

“I would say my customers are fifty, fifty, locals and tourists. We want to be different, make it personal, to be able to meet with the brewer,” he said, adding business has been amazing. 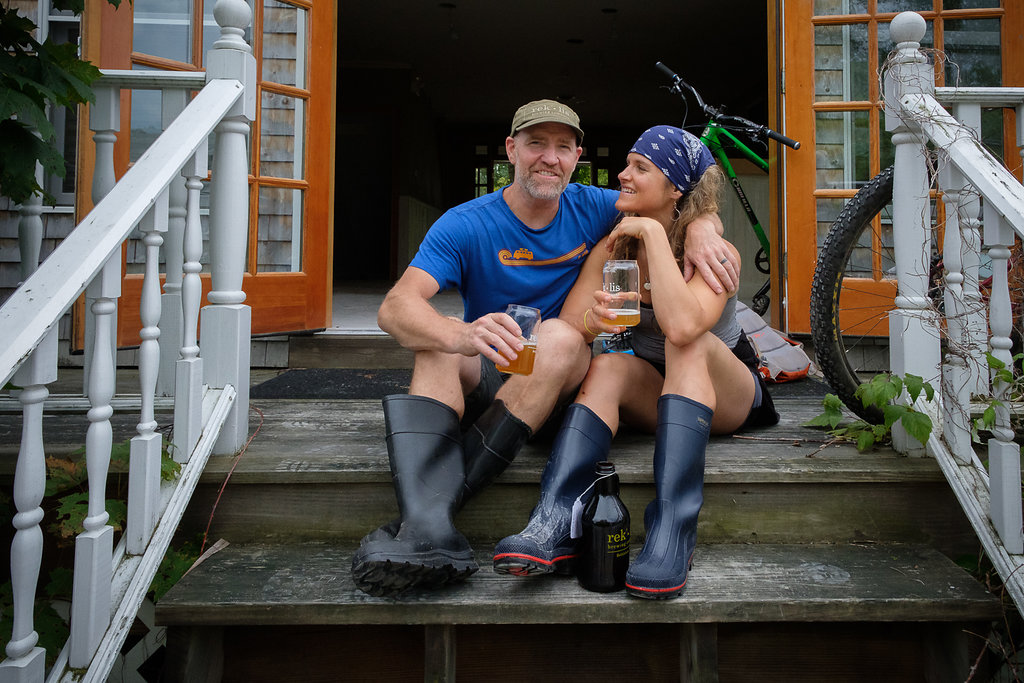 Heading south to Bethlehem, at Rek-Lis Brewery there is a different story. This past Columbus Day they celebrated one year in business.

Ask Dowling, what brought him to open a brewery and pub?

“Beer, beer brought me here, my love of beer. I cannot stand making the same brew all the time and I make beer I like to drink,” smiled Dowling, adding he has been brewing since 1991.

On the Sunday of Columbus Day weekend, where there was a 20-minute wait at 3:30 in the afternoon, Rek-Lis was pouring eight beers, stout, two pale ales, two IPA’s and a cider, which wasn’t their brand. Beers are produced downstairs from two tanks.

Before opening Rek-Lis, Dowling was home brewing down the street – only on Saturdays.

“We were brewing four beers and looking for a place of our own. The opportunity to buy this building came up,” said Dowling who was born in Germany and whose family settled in Vermont.

Dowling says they don’t really distribute beer, instead they focus on the brew pub and food.

“My lovely partner is Marlaina. This business is way more about her than me. She is talented; a designer, a fitness trainer and chef. She is in the kitchen now,” said Dowling, adding business is brisk and sometimes they cannot make enough beer.

Dowling agrees about the emergence and importance of breweries in small towns.

“We have had fantastic support from Bethlehem, and any non-profit who asks us to help, we do. I think unknowingly, we are inspiring the town. There has been so much division around the dump issues. Now we can see that there is another source of revenue, mountain biking (new association in town) and of course, the brewery,” beamed Dowling.