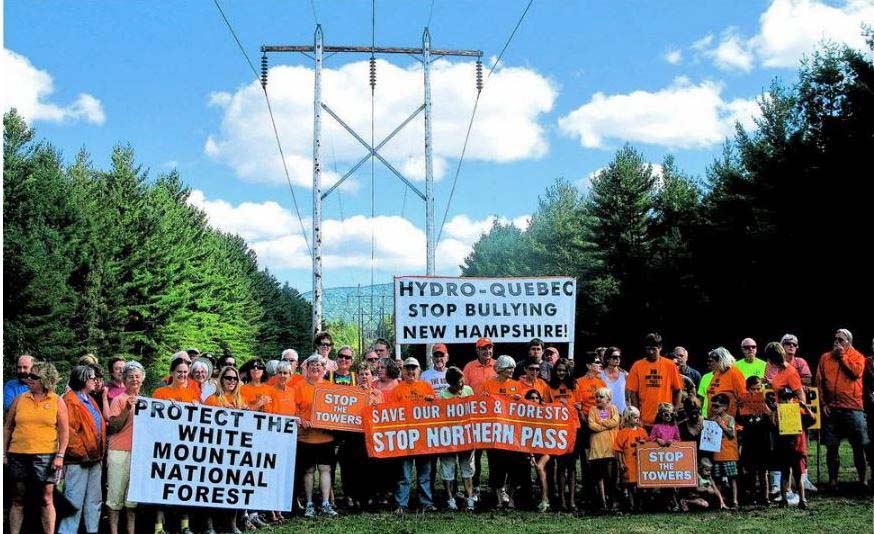 Hands Across protest photo was taken summer 2015 at the PSNH power line crossing of Gingerbread Lane in Easton.

Concord, NH August 30–The Society for the Protection of New Hampshire Forests, in concert with other stakeholders opposed to Northern Pass, will file a motion asking the New Hampshire Supreme Court to affirm the decision to deny a permit to Northern Pass and reject the appeal submitted earlier this month by Eversource.

“The N.H. Supreme Court does not often grant this type of motion,” acknowledged Amy Manzelli of BCM Environmental & Land Law. “But, in this case, the questions Northern Pass has raised in their appeal are not substantial, which is a strong argument for the court to consider doing so here.”

BCM Environmental & Land Law represents the Forest Society, as the firm did throughout the Site Evaluation Committee process for Northern Pass. In March of this year the SEC formally denied Northern Pass a Certificate of Site and Facility. In July, the SEC subsequently formally denied a Motion for Rehearing. That led to Eversource filing an appeal of the SEC decision to the state Supreme Court in August.

The Forest Society and other intervenors will file a Motion for Summary Affirmance at the Supreme Court this week, asking the Supreme Court to reject further consideration of the Northern Pass appeal and to affirm the SEC’s decision. The intervenors filing the motion include the City of Concord, Plymouth and nine other communities, the Appalachian Mountain Club, the Conservation Law Foundation, and abutters to the proposed transmission line from McKenna’s Purchase in Concord.

“Many of the represented municipalities plan to defend the SEC’s denial of the project at the Supreme Court,” said attorney Steven Whitley of Mitchell Municipal Group, PA. “They believe the SEC correctly concluded that the project as proposed clearly and obviously did not satisfy the legal requirements for a certificate.” Whitley represents the Towns of Pembroke, Littleton, New Hampton and Deerfield.

“The SEC’s conclusion is consistent with the nearly unanimous municipal perspective that Northern Pass would conflict with existing land uses, master plans, and planning goals in these communities–a perspective that the SEC was legally required to, and did, consider,” said attorney Christine Fillmore of Gardner, Fulton & Waugh, PLLC. Fillmore represents the Towns of Bristol, Northumberland, Franconia, Easton, Sugar Hill and Plymouth.

While history suggests that the state Supreme Court doesn’t often grant such a Motion, the intervenors argue that in this case Eversource’s appeal of the Northern Pass decision attempts to create disputes of law out of what are actually disputes of fact. As a consequence the Court is on solid ground to grant the Motion for Summary Affirmance.