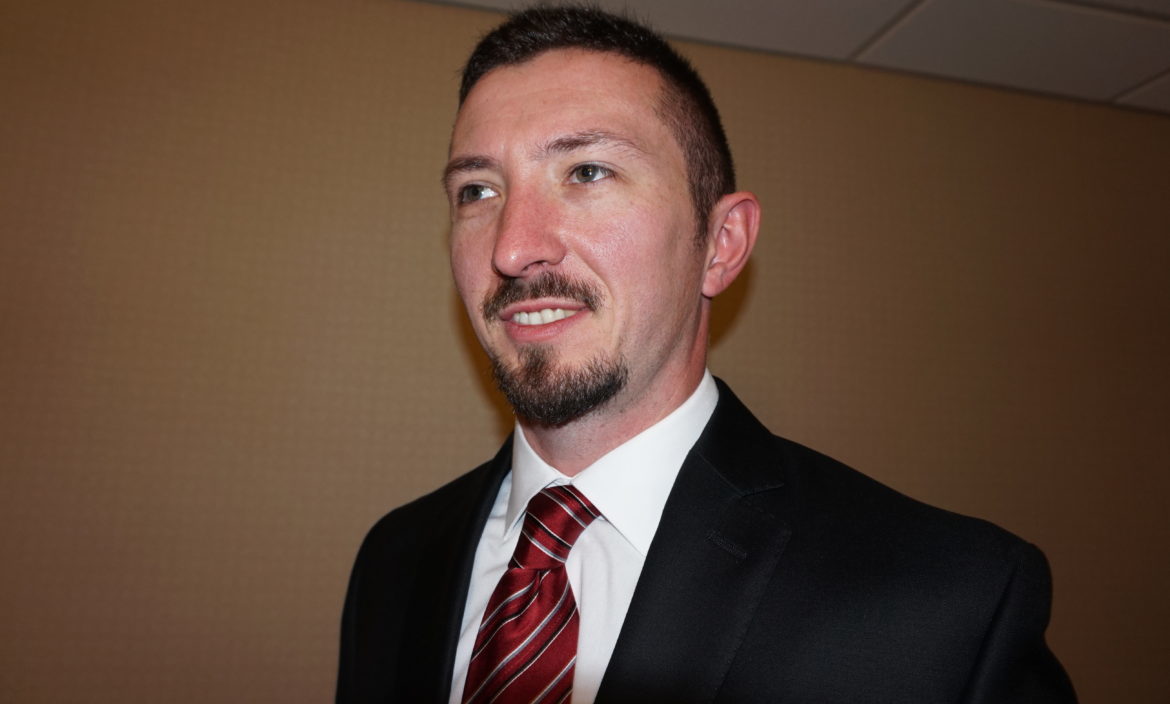 Rochester Police Officer John Gantert is pictured at the Legislative Office Building in Concord two years ago before he testified at a study commission on Laurie issues. The commission ultimately disbanded. Gantert recently applied to the Attorney General to have his name removed from the Laurie List, now called the Exculpatory Evidence Schedule. He hasn't heard whether or not his name will be removed.

Senior Assistant Attorney General Lisa Wolford said six people have applied to have their names removed from what is now called the Exculpatory Evidence Schedule, formerly known as the Laurie List.

“Three have been removed, one was denied and two have not yet been acted on,” Wolford said of the six applications for removal.

But don’t expect to find out whose names have been removed, who’s still on the list or even whether those on or off the list still work in law enforcement. June 1, 2018 EES list. 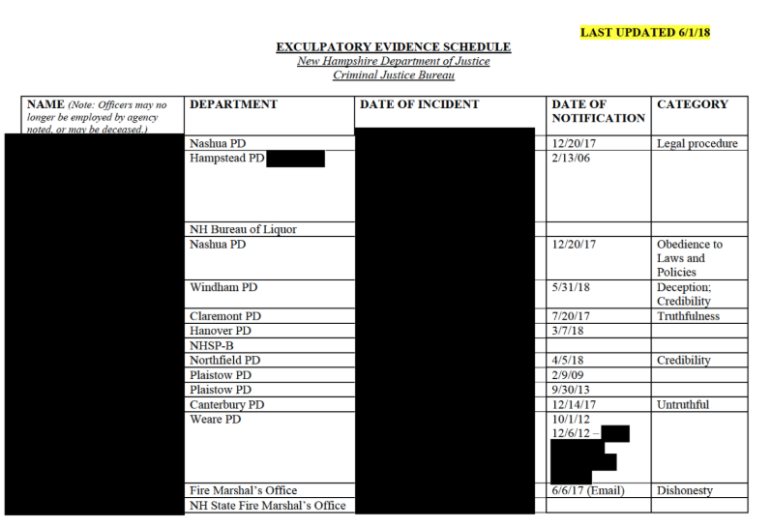 Wolford said that information is confidential along with the date of the incident that landed the officer in trouble in the first place and in some cases, the date of disclosure and the discipline that caused them to be placed on the list. It would be an unwarranted invasion of an individual’s privacy to release the officer’s names and further details, she said.

The confidential list is maintained for prosecutors to determine which officers have been disciplined for behavior that could negatively impact their ability to testify truthfully at trial. Prosecutors must disclose such information if it could be favorable to the defendant or used to impeach an officer’s testimony because of the 1963 U.S. Supreme Court case Brady v. Maryland.

Rochester Police Officer John Gantert fought all the way to New Hampshire’s Supreme Court, but was unsuccessful in having his name removed from the Laurie list. He has applied to the attorney general for removal under the new protocols.

“I’m waiting to hear. I hope my name is cleared,” Gantert said. “My name is everything.”

Being on the list has seriously impacted his career, Gantert said. “I won’t get promoted because of it,” Gantert said. And he isn’t allowed to do certain jobs, said Gantert, 35.

“How many people have been wrongfully put on the list and have no energy to fight and are so confused that they walked away from law enforcement,” Gantert asked.

He has been in law enforcement for 13.5 years. “I have fought this for seven years and it still feels like it happened five hours ago,” Gantert said. His name became public through the court system and because he testified at public hearings.

Gantert told InDepthNH.org that his legal troubles started in 2011 when he mistakenly filled out a form used to gauge dangerousness in a domestic violence case, was fired and then reinstated. His name was placed on the list.

Gantert didn’t realize the arresting officer had already filled out the form so he filled one out himself after watching a videotaped interview with the victim. Gantert acknowledges he made a mistake, but said it did not involve deceit.

Although Gov. Chris Sununu has insisted that police “deserve the same robust due process protections as any criminal defendant would have in court,” Melone and Bissonnette disagreed in an article they co-authored in the NH Bar News, June 20, page 4.

“This view is incorrect. The police are not entitled to rights equal to those held by defendants,” Melone and Bissonnette wrote. “This is because, in a criminal case, the government is attempting to deprive the defendant, not the police, of his or her liberty.”

They argued that the MacDonald memo adopts a “police-centered approach that is inconsistent with the government’s sacred constitutional obligation to disclose exculpatory evidence to defendants.”

The most recent Department of Justice Exculpatory Evidence Schedule dated June 1 obtained by InDepthNH.org through a right-to-know request includes 171 redacted names. A few months earlier a list obtained through a separate request contained only 153 redacted names and  2015 lists about 150 redacted names.

The June 1 list redacts all of the officers’ names with the caveat that they may no longer be employed and may be deceased.

It identifies the law enforcement departments, but redacts all of the dates of incidents. Some dates of notification and category of wrongdoing were blank, but 54 were included.

Most of those 54 involved an officer’s credibility and untruthfulness, but also included sexual harassment, excessive force, egregious dereliction of duty, receiving stolen property investigation and deliberately lying during a court case or administrative hearing.

Wolford, the point person at the Attorney General’s Office on EES, said details other than what was disclosed to InDepthNH.org could potentially identify an officer and therefore would not be released.

Asked Monday to confirm the number of names removed from the list hadn’t changed since last week when first disclosed by Wolford, she said that would require InDepthNH.org filing another right-to-know request.

Foster’s update explained the 1963 landmark federal case Brady v. Maryland that established the obligation of a prosecutor to provide potentially exculpatory evidence to the defense.

“This bedrock principle of the criminal justice system forms the basis of a prosecutor’s obligation to inform criminal defendants of any exculpatory and/or impeachment evidence which relates to their case,” Foster wrote.

Before that, prosecutors relied on a 2004 memo by then- Attorney General Peter Heed.

The Heed memo detailed how the Carl Laurie murder conviction was overturned in New Hampshire in 1995 because prosecutors failed to disclose to Laurie’s defense the fact that a key investigator in his case was known to have serious credibility problems.

Concord Attorney Moir represented Laurie and is an expert on exculpatory evidence. It was Moir who discovered after Laurie was convicted that a key investigator in his case was known to be dishonest, which led to his murder conviction being overturned.

Moir has been an outspoken critic of Laurie lists and secretive procedures and MacDonald’s latest update is no exception. If a sworn officer has done something serious enough to hinder his or her ability to testify in court, Moir believes the officer’s name and details of the incident should be known to the public.

In his more than 40 years practicing criminal law, Moir has been notified only once that the name of an officer involved in a case he was defending was on the list. Because of the secrecy in the whole procedure, there is no way to make sure all officers are on the list who should be, he said.

“These names should be public,” Moir said. “The information provided to the public is not sufficient.”

The one time it was disclosed to him simply meant Moir questioned the trooper on the witness stand about the discipline. “It didn’t make a huge difference,” Moir said.

“I believe that the new Exculpatory Evidence Schedule protocol is just a repackaging of what the state’s been doing for the last 20 plus years,” Moir said.

Acting Merrimack County Attorney George Waldron, said the new protocols are working well from his perspective. Of five local officers on the list in his county, only three are actively working in law enforcement, Waldron said.

“It’s better in the sense that people are being monitored. The police chiefs are being given orders from the attorney general that they have to produce a certificate under oath with the list of people who may qualify for the Exculpatory Evidence Schedule,” Waldron said.

The chiefs are responsible for alerting the attorney general and they know there could be repercussions if they don’t, Waldron said.

The old “Laurie list” was less structured and it wasn’t clear who held it or where it was kept, Waldron said.

“The new system is helpful. The onus is on the chiefs to let us know. He can’t just put (the officer’s disciplinary finding) in a personnel file and forget about it,” Waldron said.

An investigation will be conducted into the allegations and result in a conclusion that it is “sustained,” “not sustained,” or “unfounded,” or that the officer is “exonerated.”

If after considering the evidence presented by the officer, the head of the law enforcement agency’s conclusion remains that the sustained allegation of misconduct constitutes EES conduct, he or she shall issue notification causing the officer’s name to be placed on the EES, according to MacDonald’s memo.

The Attorney General’s designees for the purpose of EES removal are the Director of the Division of Public Protection and the Criminal Justice Bureau Chief. The Attorney General may designate other Senior Assistant Attorneys General for this purpose as well, the memo states.

The request for removal must be made in writing by the head of the law enforcement agency at which the officer was or is employed, or by the officer or designee. The officer’s name will be removed if the allegations were unfounded or not sustained.

Bissonnette and Melone’s article said the MacDonald memo makes the system even worse by accommodating the concerns of the police at the expense of defendants who risk losing their liberty.

“This is not how the Constitution works,” they wrote. “The Attorney General’s Office must revise the MacDonald memo.”

The following story was reported in 2016 with a Fund for Investigative Journalism grant dealing with Laurie issues.