Here’s how and why we mapped the immigrant children shelters, and how you can help us investigate.

We will continue to update this post as we obtain more information about the facilities and the children being held there.

ProPublica found and mapped 99 facilities holding immigrant children, including shelters and foster care centers. As of June 26, 2,047 children remain separated from the parents who crossed the border with them. In addition to these children, these shelters were already home to an additional 8,886 children who crossed the border unaccompanied by older relatives before the “zero tolerance” policy was announced.

The facilities include Casa Padre, a shelter based in a large former Walmart building in Brownsville, Texas, that is housing 1,450 children; a newly constructed tent city near the border in Tornillo, Texas, where temperatures are currently reaching a high of 104 degrees; rural Tudor-style cottages in upstate New York, and a shelter in a former YWCA in downtown Portland, Oregon. There are shelters in the centers of major cities like Houston, Phoenix, Tucson and El Paso. Others are in residential areas. Chances are good that there is one near you. Plug in your ZIP code and check here.

We found that these facilities are run by a diverse mix of organizations, from the large nonprofit Southwest Key, which operates shelters in Arizona, Texas and California, to small religious organizations that house as few as 12 children. 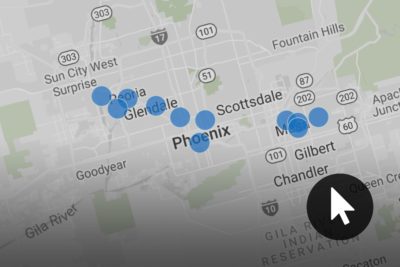 The Immigrant Children’s Shelters Near You

We found 99 facilities holding immigrant children and have mapped 78 of them. Help us find out more about the facilities and the children being held there.

Why Did We Publish the Addresses?

Immigrant detention centers and shelters can be found in or near many big cities and suburbs in 17 states.

We published the names and addresses so that readers could understand their proximity to the facilities and could see how immigrant children have been spread throughout the country. The information we used to find these shelters was publicly available, either in public records or from news stories. This map adds specificity to the information released by the U.S. Department of Health and Human Services, which so far has refused to give basic information such as the exact number of facilities housing immigrant children.

Such transparency is vital to ensure the safety of unaccompanied minors and the children who are separated from their parents and help assure the government agencies overseeing this process are accountable for their actions.

Most importantly, we are publishing this data so that you can help us fill in information that will aid our reporting on, and tracking of, minors in detention and that will help explain the workings of a detention system which is often opaque.

How You Can Help

We have lots of questions. Who operates these facilities? What is it like to work there? How many children are held at each facility? Where did these children come from? How long have they been held? What are the conditions like inside these facilities? How long is it taking for separated children to be reunited with their families?

In order to get a complete picture of the facilities and the children inside, we are asking for your help. There are three forms, available in English, Spanish and Portuguese, which readers can use to contribute information that will help us investigate this crucial issue.

Do you know an unaccompanied minor or a child who was separated from a parent at the U.S.-Mexico border? You can securely share more details using “I Know a Child In a Facility.” This form is open for anyone including families, lawyers, and organizers who can help us identify who is where.

Are you a current or former employee of a facility? Do you have more information or know of a location that has not yet come to light? Or have you been detained at such a place? You can securely share details using “I Know Something About a Facility.”

You can always email us at border@propublica.org or text us at 347-244-2134 with other tips and questions. You can also read our guide on how to send us tips securely.

How We Did This

We used a combination of federal and state databases to identify these facilities and contacted the agencies themselves to ask about the services they provide and their capacities. We searched HHS’ Tracking Accountability in Government Grants System, or TAGGS database for grants given to organizations that house unaccompanied minors. We cross-referenced those against state-level licensing boards that monitor child care facilities and residential homes for minors. We compared these to articles from local news organizations who have covered these facilities, which is often when complaints or allegations of abuse are made. We have mapped 28 facilities operated by Southwest Key, Inc. Program, and asked them to confirm that list. They declined, citing “security reasons.” They’ve publicly said they currently operate 26 such facilities.

Claire Perlman and Alex Mierjeski contributed reporting to this story.

Update, June 28, 2018: We have added two facilities, KidsPeace in Bethlehem, Pennsylvania, and Center for Family Services in Camden, New Jersey.