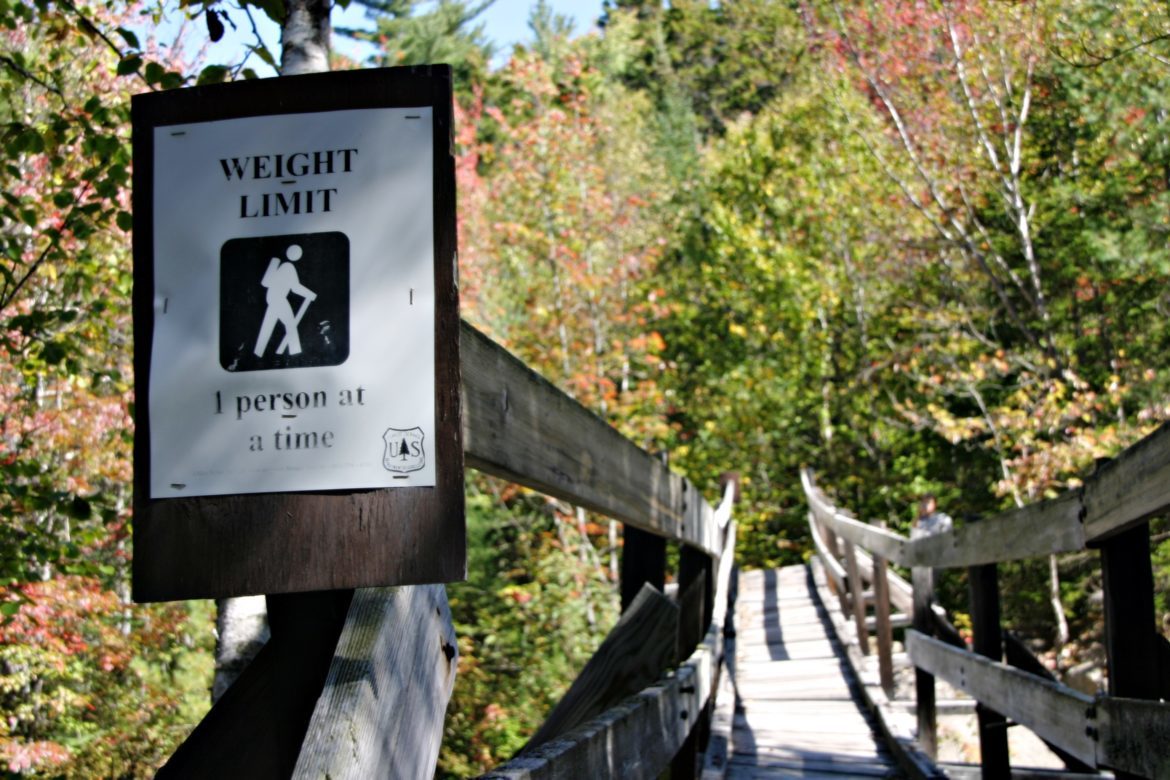 CAMPTON – Today the White Mountain National Forest, Pemigewasset Ranger District released the Draft Decision Notice and Finding of No Significant Impact and the Environmental Assessment for the Thoreau Falls Bridge Removal project. This document announces the proposed decision to remove the bridge without replacement.

The District Ranger considered on-the-ground conditions in and near the project area, input from the Forest Service interdisciplinary team, public comments, the Environmental Assessment, law, policy, and the goals within the White Mountain National Forest Land and Resource Management Plan, in making her decision.

The bridge is located in the Pemigewasset Wilderness, above the confluence of the North Fork of the East Branch of the Pemigewasset River. The purpose of this project is to address the failing condition of the log bridge as it relates to public safety and its presence in wilderness. The bridge has deteriorated over time and it sustained damage during Tropical Storm Irene in 2011. Following Tropical Storm Irene, a Forest Service engineer completed a field inspection of the bridge.

Based on this field inspection, the bridge was signed with a single-hiker weight limit. In August 2017, White Mountain National Forest engineering staff performed their annual safety inspection of the bridge and recommended the bridge be permanently closed to the public beginning summer 2018 due to further cracking, rotting, the overall failed condition to the wooden structure, and the safety risk it poses to the public.

Thoreau Falls Bridge was constructed in 1962, prior to the area being designated as wilderness, for recreational hikers to cross the East Fork of the Pemigewasset River as part of the Thoreau Falls Trail. The Wilderness Act of 1964 defines wilderness as an area that provides “outstanding opportunities for solitude or a primitive and unconfined type of recreation.” Although the Wilderness Act defines wilderness as “undeveloped,” trails are defined as an acceptable improvement.

Trails in wilderness are typically maintained to a standard that provides a greater challenge compared to non-wilderness trails. The need for bridges and other structures is minimized through the design and location of trails, and structures are used only for the protection of the wilderness resource or to address extraordinary safety hazards. In this case, the analysis concluded that the river is fordable during the primary season of public use.

Copies of the Draft Decision Notice and Finding of No Significant Impact, and the Environmental Assessment are available at the Pemigewasset Ranger District Office, 71 White Mountain Drive, Campton, New Hampshire, 03223, or on our website at http://www.fs.usda.gov/projects/whitemountain/landmanagement/projects.

USDA is an equal opportunity provider, employer, and lender.