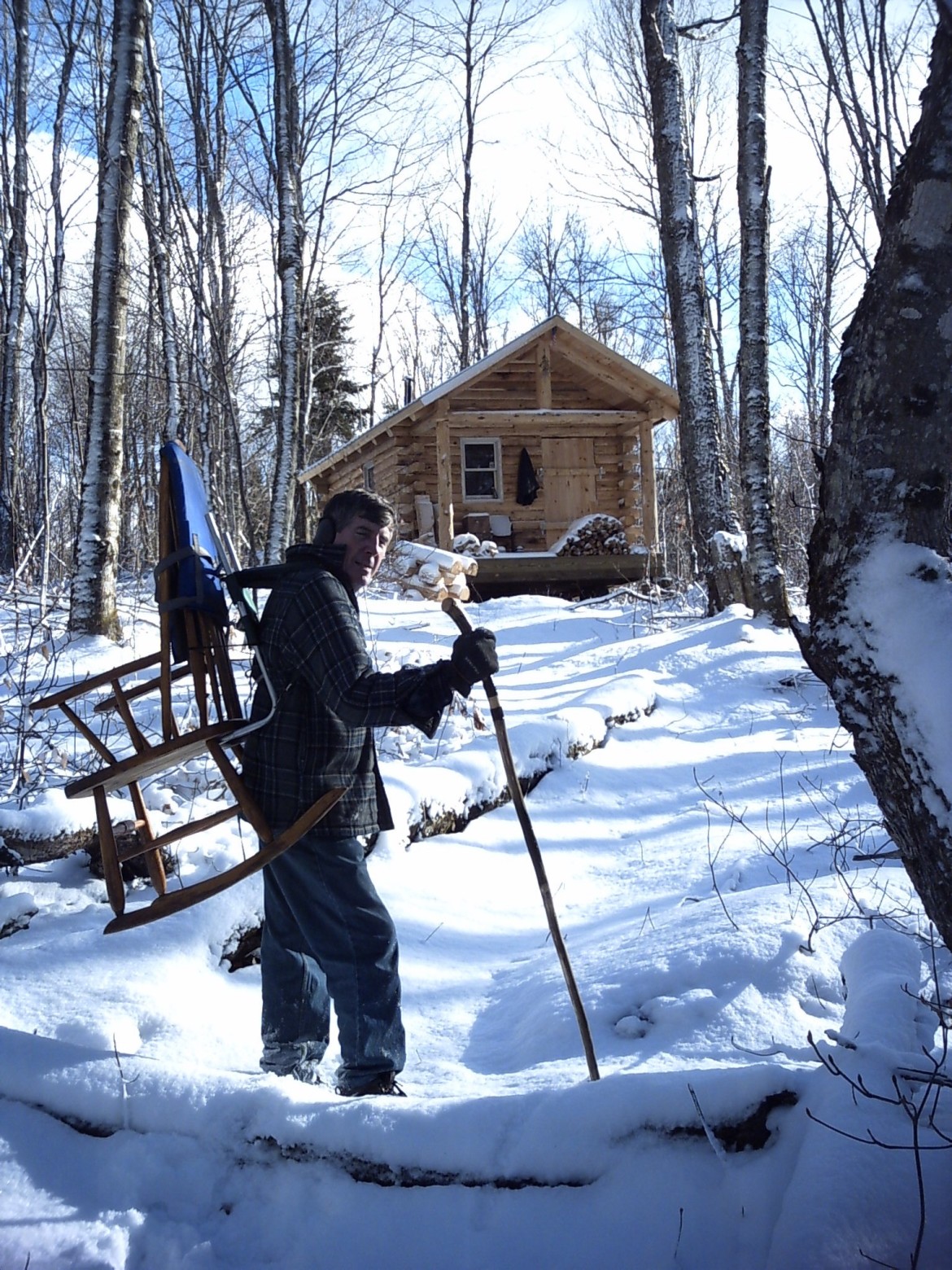 This is where a lot of the time a lot of my heart is — camp, in the middle of nowhere, an uphill hike from the nearest log-landing. That’s me, back-packing in the first piece of furniture in 2004—a reading chair, of course. 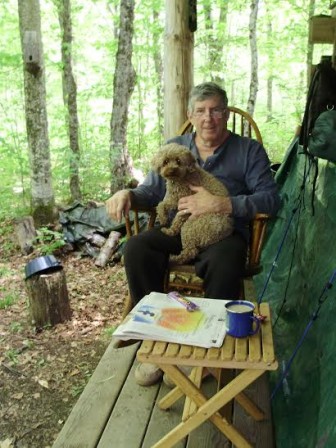 We are grateful for John Harrigan. We are republishing his first column for InDepthNH.org that ran Jan. 11, 2016, and hope to be seeing his byline again soon. We miss you John and wish you a speedy recovery — Nancy West.

These are not New Year’s resolutions, made to break. In fact it’s a typical day’s list, except for that last one.

Big moment, really.  A blank canvas to paint on.  Footprints in fresh snow.

Which I just made, actually, trudging around the barnyard as a light snow came down to add to the night’s accumulation. The tractor, serious skidder chains clanking, is backed into the main barn for the night.

The furnace is huffing away, working on a charge of three-foot birch, beech and maple to get the water jacket back up to 180 to heat the house.

Time to sit back and think. The Net is no stranger. I’ve been on the planet for 68 years, after all, and was around when it came along.

And I had barely mastered the most effective and efficient way to take advantage of a new evolution called desktop publishing when, “Poof!” this new medium with endless possibilities came along, and I had to learn how to build a website, and fast.

That was back in the early 1990s, when I was running three weekly newspapers and a big web-press printing plant and thought I’d seen it all, from hand-setting type onto a composing stick to running archaic letterpress presses to presiding over the wholesale switch to offset printing.

“Whew,” I said, hoping to take a deep breath, and all of a sudden along came the Net.

I grabbed a dozen eight-and-a-half by eleven sheets of paper and a Number 2 pencil, shut myself in my office and went to work, and in the end created a site featuring half a dozen mock newspaper pages, including Page One.

“Man Bites Dog,” ran the headline on one of the bogus stories. New Hampshire’s northernmost weekly newspaper thus created one of the very first newspaper websites in New England.

Even so, after nearly half a century of newspapering and doing radio and TV to boot I’ve never had an Internet presence, per se, unless you want to count archived columns on other people’s sites — the Union Leader, Colebrook’s News and Sentinel, the Meredith-based Salmon Press newspaper group, the New Hampshire Sunday News.

But then along came longtime co-worker Nancy West, with an invitation to climb aboard her start-up website, which seeks to present news — in depth and other writing, as in columns and features — from all over the state. Sounded like my kind of deal, since I’m a statewide guy. So here I am.

I write from my office on a hilltop farm three miles out of Colebrook, close enough to Canada that I can see it, but I spent a good part of my working life down below the notches and had the run of the state when I was working full-time for the New Hampshire Sunday News.

So as they’d say about the tramp printer with his bindle over his shoulder, I’ve gotten around.

I’m already doing a weekly column (“North Country Notebook”) for the dozen or so Salmon Press papers covering the northern two-thirds of the state (readers who want to see it can go to newhampshirelakesandmountains.com, select Newfound Landing, and select Archives), and a Thursday 7:10 a.m. radio gig on WTPL FM 107.7 with host Peter St. James, but this thing with InDepthNH.org will be something different.

How, I don’t know. With this kind of thing you feel your way along.

Right now, with a few pertinent photos tagging accompanying this introductory piece, I already feel at home on InDepthNH.org. We’ll go from there, with occasional columns and essays, news stories that catch my eye and politics when I get mad enough. And so as you say, when you don’t really know when the next time will be, “See you around — whenever.”

(Contact John Harrigan at campguyhooligan@gmail.com or PO Box 39, Colebrook NH 03576. Look for him on Facebook at https://goo.gl/zJwXqs)