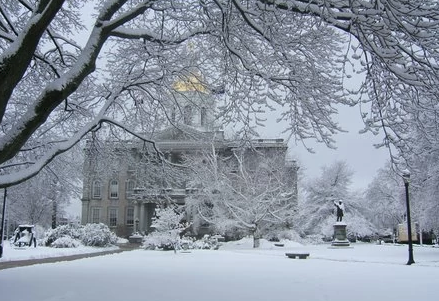 NH State House on a snowy day in Concord.

It’s Silly Season once again at the State House. Legislators are meeting in Committees of Conference.

After the House or Senate passes one of its bills, it is sent to the other chamber for their consideration. This most often leads to the bill being changed in some way. The changes can be as simple as adding a comma, or as complicated as a complete rewrite of the bill.

Before it can be sent on to the Governor for signing, both chambers must agree to the changes.

We in the House have several options when the Senate returns an amended bill. We can concur, or agree with the changes, at which point the bill moves on to the Governor.

We can non-concur, or not agree, at which point the bill dies.

Or we can non-concur and request a committee of conference. That’s when Silly Season officially begins.

The committees are made up of seven members—three senators, four representatives—who are chosen by committee chairs with the approval of the Senate president or the speaker of the House.

House members on the committee are supposed to defend the House position on the bill, and only those who voted in favor are supposed to be appointed. But, as I learned this week with SB 438, that is not always the case.

You need some background here. SB 438 deals with the postponement of local elections, and was drafted to address the problems created when major winter storms hit us on the town meeting day two years in a row. One section of current law was interpreted by municipal lawyers to grant authority to postpone local elections to town moderators and other local election officials. The Secretary of State’s office disagreed. They read the law differently, and said no one had the authority to postpone.

The bill that came to us from the Senate set up a process to be used, and gave the authority to postpone local elections to the Secretary of State.

Needless to say, local officials were not very happy.

The hearing in the Election Law committee lasted for hours. Almost all the testimony we heard was against the bill. Although the Secretary of State has authority for state and federal elections, moderators and town clerks have always had sole authority over local elections where local boards and town officials are determined. They are in a better position to know the conditions on the ground than someone in an office in Concord.

Election Law worked hard to find a solution. Two different amendments were proposed. One, drafted by a Rep Moynihan, D-Dummer, amended current law by setting up a process, similar to the Senate version, but maintaining the moderator’s authority to postpone. The other, drafted by the committee chair, set up a different system, and kept the Secretary of State, and also the Attorney General, involved. The committee voted for the Chair’s amendment, 11-9. The other was presented to the House as a floor amendment.

This really should not have been a partisan issue at all, and indeed it wasn’t. The committee amendment was rejected by the House by a bipartisan vote of 155-176. This was a division vote, no names attached. The floor amendment was adopted, by a nonpartisan vote of 178-158. This was a roll call vote, so we know how each member voted. The final bill as amended passed with a voice vote. Remember this. It is important.

The Senate asked for a committee of conference. And here’s where I began to learn new things. House members appointed are supposed to have voted in the majority. They are supposed to defend the House position.

Of the four House members originally appointed, only one (me) had voted in the majority. At that time, I was the only Democrat. When I questioned, I was told there was no way to know how anyone voted because the final vote was a voice vote.

But of course there was—that roll call vote on the amendment just prior to the voice vote made it clear how people voted. I was the only one of the four who voted with the majority. In fact two of the members were the committee chair and vice-chair, who obviously voted for their own amendment.

Just before the conference met, the chair was replaced by Rep. Moynihan, the sponsor of the amendment that passed the House. House members were now divided 2-2.

It was clear from the beginning the Senate was not interested in the House’s position. Two of the three Senators live in cities, and their concerns made it obvious they had little understanding of how town meetings work. Rep Moynihan and I worked hard to explain the reasons for the House’s position. To their credit, the other two reps stayed silent until asked their opinion, and were honest in their response. They offered a solution which was a large part of the failed amendment. We recessed until the next day.

When we reconvened, the Senate offered to amend their bill to include part of the failed amendment. Because the House conferees were split, we went to the Speaker to ask for a solution.

He gave us one. He took Rep. Moynihan and me, who were defending the House position, off the committee. House committee members now include the Election Law vice chair, a member of the House leadership team, and two new members who live in cities and have no familiarity with the bill.

The final meeting was today at 10:30. The new committee chose to disregard the voices of local officials and agreed to the original senate bill, unchanged. With no one left to support it, the House position has been scrapped.