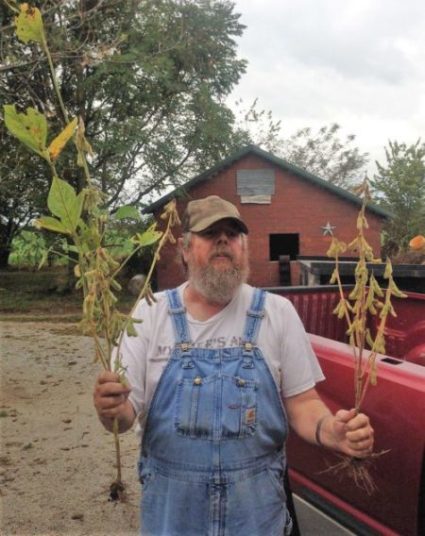 Darvin Bentlage, farmer in southwest Missouri, showing a healthy soybean plant as well as a plant he says was damaged by dicamba that drifted onto his fields from neighboring land.

Last year, according to a University of Missouri survey, dicamba damaged an estimated 3.6 million acres of soybeans across 25 states when it drifted from farms planted with seeds genetically engineered to resist the chemical onto regular soybean fields.

That heavy toll on soybeans has pitted farmer against farmer. In 2016, dicamba even figured in a dispute that led to the murder of an Arkansas farmer who had accused a neighbor of harming his soybean crop with the herbicide.

The widespread dicamba-related damage cited in 2017 by agriculture officials came afterfederal regulators conditionally approved new versions of the herbicide that could be applied throughout the growing season. The problem, critics say, is that the revamped weed killers can still destroy valuable crops — unless they are grown from seeds, developed in tandem with the new herbicides, that were genetically engineered to be dicamba-resistant.

The result, critics maintain, is that farmers are forced to use the dicamba-resistant soybean seeds – a product sold principally by Monsanto, the world’s largest seed company — or risk watching their crops wilt when neighbors apply the controversial weed killer.

With the new planting season beginning, legal battles over dicamba are heating up in federal and state courts.

Monsanto, BASF and DowDuPont are defendants in lawsuits initiated by farmers seeking millions in compensation for crops they say were damaged last summer. The plaintiffs have brought 14 cases in Arkansas, Illinois, Kansas and Missouri but, as a result of a February ruling, they will be heard together by a federal panel in St. Louis.

Meanwhile, a coalition of food safety, environmental and farming groups is asking the federal Ninth Circuit Court of Appeals to rescind the Environmental Protection Agency’s conditional approval of the new version of Monsanto’s dicamba herbicide, known as XtendiMax with VaporGrip Technology.

“Our goal and hope,” said George Kimbrell, legal director of the Washington, D.C.,-based Center for Food Safety, is that the court blocks the use of the herbicide, forcing the EPA to launch a thorough new review of whether it should be allowed. Kimbrell called it “very unlikely” that there will be a decision in time to affect farmers this summer. But if the suit prevails, he said, the herbicides sold by BASF and DowDuPont also should be sidelined because they were approved by the EPA on a “me-too” basis on the same rationale that led to the green light for Monsanto’s product.Monsanto claims the amount of damage from dicamba nationwide has been highly overestimated and is due mainly to faulty application by farmers. The St. Louis-based company says that, despite the damage complaints, farmers who used dicamba-resistant seeds and the herbicide produced a record crop last year.

For five decades, dicamba was employed to kill pests such as pigweed at the beginning of the soybean and cotton planting season. The chemical was considered too toxic and volatile to use after crops had actually sprouted. Once applied, it can convert into a vapor that drifts toward nearby fields and forests, potentially harming unprotected crops, trees and animals.

But more recently herbicide manufacturers developed what they said was lower-volatility – in other words, less likely to drift — dicamba that could be used later in the growing season with plants from new dicamba-resistant soybean seeds.

Farmers without those new seeds would be protected, they assured the EPA, because reformulated dicamba wouldn’t pose a threat if applied under the right weather conditions, by trained sprayers with the proper nozzles — and far enough away from vulnerable properties.

The EPA issued its decision two years ago, conditionally allowing the new dicamba to be sprayed in 2017 and 2018. The EPA said it considered the product safe for people and animals when used properly, and that it will monitor results this summer before deciding on future use.

The groups taking legal action against the EPA, in their opening brief filed in February, accuse the agency of relying on company assurances rather than conducting its own analysis or ordering independent safety reviews. They also claim that the EPA, which worked with Monsanto and the other ag giants to provide new usage instructions for the coming summer, violated the Endangered Species Act, which covers such protected species as whooping cranes.

Some farmers say the new dicamba herbicides threaten their way of life. “If my neighbors continue to spray dicamba formulations like XtendiMax on their soybean crop, I will not be able to maintain the way I farm,” said fourth-generation southwest Missouri farmer Darvin Bentlage in a declaration for the EPA litigation. “If XtendiMax continues to be approved for use on dicamba-resistant soybean, I will likely consider retiring early, and just sell my farm and move.”

Bentlage, who avoids planting genetically engineered seeds, said that more than 25 acres of his soybeans were damaged last summer when the herbicide drifted onto one of his most productive fields. He said it was likely that the weed killer, which becomes more volatile in hot weather, was sprayed on nearby plots where dicamba-resistant seeds were used.

“One seed dealer made the comment that I might as well buy some and protect myself because the neighbors are using it,” Bentlage said in a telephone interview with FairWarning. “But when I push my pencil, I can buy conventional seeds for $20 a bag of 50 pounds.The dicamba-resistant ones cost double that.” “I still use my old conventional beans,” he continued. “I’m not changing the way I farm just for Monsanto.”

In a brief submitted on April 9, the EPA asked the court to uphold its conditional approval of Xtendimax, saying the herbicide “would not generally cause unreasonable adverse effects on the environment” because of its “lower potential” to drift.

Monsanto’s vice president of global strategy, Scott Partridge, said in a telephone interview that most damage last year was due to farmers not following detailed instructions for the herbicide’s use.

In addition, he said, crop yield surveys and interviews by Monsanto have found that the problems were highly exaggerated.

He dismissed the argument that farmers could feel coerced into buying Monsanto seeds as a defense against the herbicide, saying those claims were invented by plaintiffs lawyers. “They’re very shrewd, it’s imaginative,” Partridge said.

BASF, in a statement to FairWarning, said it has trained nearly 17,000 people to use its Engenia dicamba brand. “This technology is critically important to growers,” BASF said.

DowDupont, which markets FeXapan herbicide with VaporGrip Technology under an arrangement with Monsanto, did not respond to requests for comment.

The legal fight is particularly fraught in Arkansas, where the state plant board blocked the use of Monsanto’s XtendiMax last summer. Despite the ban, 900,000 acres of soybeans were damaged by dicamba herbicides in Arkansas, more than in any other state, according to the University of Missouri survey.

Legal action filed by Monsanto to overturn the ban was dismissed this year, although some farmers have won court decisions that, if the rulings stand, will provide exemptions letting them apply the weed killer this summer.

Before the new version of of dicamba was conditionally approved by the EPA, some farmers surreptitiously used older varieties during the 2016 growing season on crops grown with newly developed dicamba-resistant seeds.

The October 2016 Arkansas slaying of farmer Mike Wallace occurred after dicamba was sprayed late in the growing season. Wallace, who was not armed, confronted Allan Curtis Jones about damage to his crops and was shot seven times. Jones was convicted of second-degree murder and sentenced to 24 years in prison.

Scott Partridge, Monsanto’s vice president of global strategy, said most dicamba-related crop damage last year was due to farmers not following detailed instructions for the herbicide’s use. (Monsanto photo)

The soybean crop is a big part of the farm economy. The U.S. Department of Agriculture projects that soybeans next year will overtake corn as the nation’s most widely planted crop, covering 91 million acres, spurred largely by demand for livestock feed. The government forecast continuing strong global demand, particularly in China, although Beijing is now threatening to use the legume as a pawn in the tariff fight with the Trump administration.

Last summer, with mass spraying of dicamba during the growing season for the first time, complaints surged: More than 2,700 official investigations of damage claims were reported nationwide.

“In my opinion we have never seen anything like this before,” Kevin Bradley, a University of Missouri pest management expert who handled the dicamba damage survey, wrote in an online newsletterlast August.

Monsanto, which is being acquired by the German pharmaceutical and chemical giant Bayer AG, also produces Roundup, a controversial herbicide with the active ingredient glyphosate. It has been described as the most widely used herbicide in the world.

The company estimates that its seeds, engineered to resist glyphosate as well as dicamba, will be planted on 40 million acres nationwide this year. That’s nearly double the number of acres as last year. One reason for the new emphasis on dicamba is that glyphosate has lost some of its effectiveness because weeds are increasingly resistant to it.

Partridge said he is confident XtendiMax use will increase in coming months, despite the restrictions placed on it by Arkansas and, this year, also by Minnesota, North Dakota and Missouri.

In an open letter to farmers in January, Monsanto hailed what it called “tremendous results” in 2017, without mentioning damage to soybeans not grown from the company’s genetically engineered seeds. The company said a survey of soybean growers who applied XtendiMax reported “97 percent weed control reduction” and higher crop yields.

To promote the product, Monsanto is offering a million spray nozzles at no cost, flags to identify sprayed fields, cash incentives and ongoing training. Partridge said the company trained more than 50,000 farm workers last year and 25,000 this year.

Still, farmers who say they have suffered remain hopping mad and fearful for their future.

“I like to be a good steward not only to my ground but to my neighbors’ ground,” said Bentlage, the Missouri farmer. “My wife and I are disgusted and exhausted by the amount of time and energy we have spent fighting with our neighbors to protect our health and livelihood.”

“Fighting with my neighbors about dicamba-drift damage to my soybeans is not how I had envisioned I would farm.”