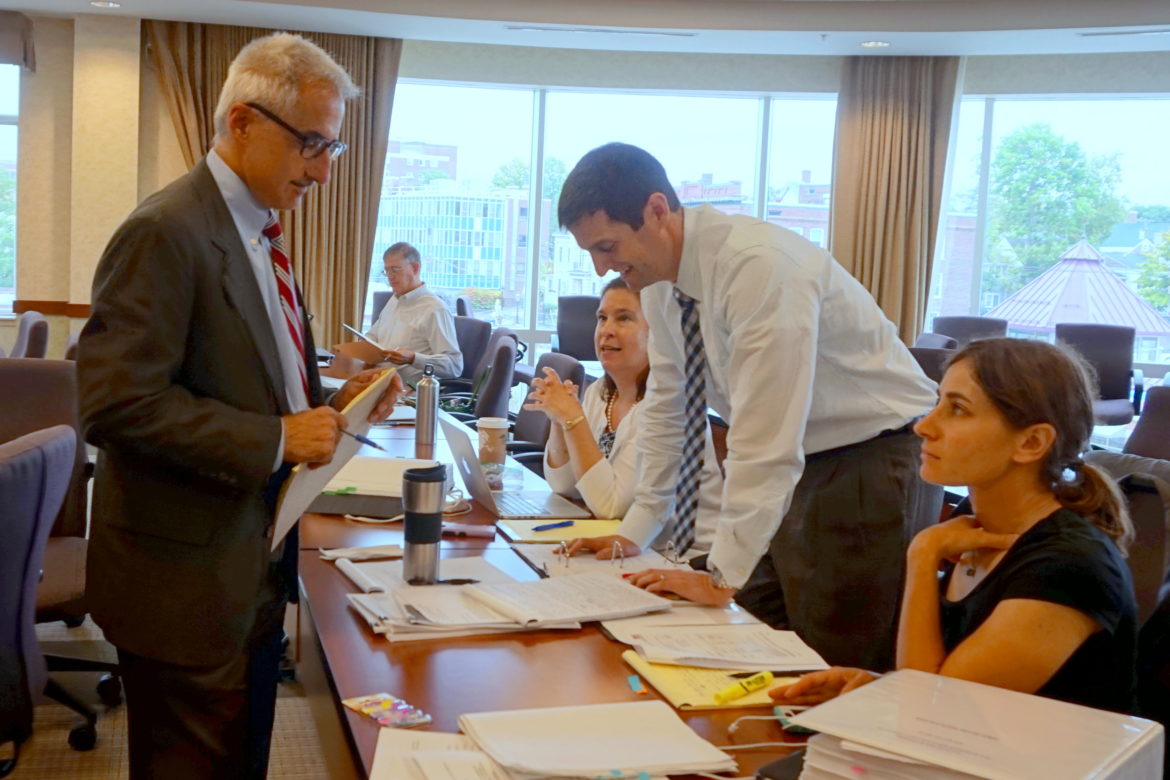 Attorney Thomas Pappas for the Counsel for the Public is pictured standing at left. Seated at the table from left are attorneys Christine Fillmore, Steven Whitley and Danielle Pacik at a Northern Pass session on Sept. 9, 2016.

CONCORD – Three municipal intervenor groups in the Northern Pass project objected Monday to a motion asking that two Site Evaluation Committee members recuse themselves from further deliberations on the $1.6 billion powerline plan that was denied on Feb. 1.

The motion for recusal was filed 10 days ago by the International Brotherhood of Electrical Workers and the Coos County Business and Employers Group, which also called themselves the Business Intervenor Group.

The group wants SEC members Patricia Weathersby and Kathryn Bailey to recuse themselves because of comments they made during deliberations. The Business Intervenor Group says the comments show they couldn’t be unbiased moving forward.

But the municipal intervenors disagreed. They say the recusal motion fails to recognize the context in which the statements were made and doesn’t adequately set forth the legal standard for recusal.

“In short, there is no basis under the facts or law referenced by the Business Intervenor Group to require recusal of Subcommittee Members Weathersby and Bailey. No objective-reasonable person reviewing the record would have a reason to doubt their impartiality,” the motion states.

The statements by Weathersby and Bailey were made after the SEC unanimously found that Northern Pass/Eversource Energy had failed to meet their burden on orderly development, the municipal groups said.

“There is no reason to doubt the impartiality of those Subcommittee members based on their statements,” the motion states.

Attorneys Brian Murphy and James Bianco had argued for the Business Intervenor Group that the continued participation by Weathersby and Bailey would “deprive the parties of their due process rights.”

Weathersby, a Rye attorney, and Bailey, who also serves on the Public Utilities Commission, both voted to deny the project along with the other five SEC members in a unanimous vote. On March 30, the SEC released its written denial of the 192-mile high voltage powerline from Pittsburg to Deerfield to bring Hydro-Quebec electricity to Massachusetts.

The Business Intervenor Group recusal motion quoted Bailey as saying: “I’m worried that if we continue with our deliberations, we will really need to figure out what conditions we would impose on a lot of things. And that’s not – that’s not going to be simple and it’s not going to be fast. And there’s going to be a lot more things to appeal. And I think we have a pretty good record right now…”

“From an objectively reasonable person’s perspective her comments demonstrate a factual basis upon which to doubt her impartiality,” the Business Intervenor Group motion states.

Weathersby’s comments “indicate that even if deliberations were reopened she would not consider whether any mitigating conditions imposed by the subcommittee could address concerns raised during the course of this proceeding, contrary to SEC rules,” the recusal motion states.