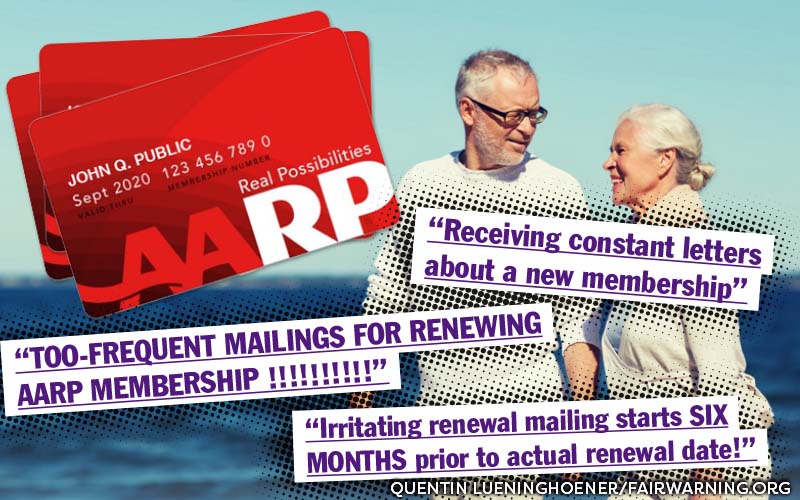 Editor’s note: See clarification at the end of the story.

In its newsletters and magazines, in congressional testimony and on its website, AARP warns seniors about deceptive direct mail and other dubious marketing come-ons as part of its mission to protect members from financial abuses.

But the huge advocacy group’s own aggressive efforts to coax seniors to join or renew their memberships also have drawn a burst of criticism this year.

Angry members say AARP’s barrage of solicitation letters and social media posts can mislead or confuse aging consumers, some of whom struggle with memory and managing their financial affairs. Hundreds have complained about getting false warnings that their memberships would soon expire, and at least some people have unwittingly paid for duplicate memberships.

The critics include Kathy Portie, senior editor of the Big Bear Grizzly weekly newspaper in Southern California. In January, she received a sponsored post from AARP in her Facebook feed that read: “Your membership is about to expire. … ACT FAST – Time is running out.”

Her terse reply, mirroring the grievances of dozens of others who received the same post, was, “No it’s not. It is valid through 2020. So stop it.”

Wendi Fein fumes about the experience of her octogenarian parents, Ruth and Richard Schwartz. She said the two, who live in Nevada City, Calif., have cognitive issues but, like many in their generation, pay their bills promptly without asking questions.

In January, Fein wrote to the Better Business Bureau that she had discovered that her parents sent in a check to AARP five times after receiving mailings last year. “Every time,” she said, “they paid the $16,” which covers an annual membership for two.

The extra payments have since been refunded, Fein said, and the organization was asked twice by phone to stop hounding her parents. Even so, she said, the couple received another notice and wrote out yet another check that would have been mailed if her sister hadn’t intercepted it.

“For an organization that’s primary goal is senior advocacy, their practice of multiple renewal notices is the antithesis of this goal,” Fein wrote in her complaint to the Better Business Bureau.

Over the last three years, more than 425 complaints about membership solicitations have been received by the Better Business Bureau and consumer help websites, or posted as comments on AARP’s Facebook ads and online community forum. In the last three months alone, there have been more than 120 negative comments in response to AARP membership ads on Facebook. On AARP’s community forum, the renewal practices have been criticized as ” deceptive,” “a waste,” “stupid” and “an obscenity.”

AARP declined requests by FairWarning for an interview with a senior official to discuss complaints. Via email, AARP spokesman Josh Rosenblum said AARP membership cards include expiration dates. He said the group has discontinued some of the social media language that has been criticized. He also said members who complain about multiple renewal notices will get a single mailing 30 days before the renewal deadline.

“AARP is dedicated to listening to and caring for our 38 million members, but if an issue arises as it sometimes does, we take action to solve it and learn from it, which is why we have an A+ Better Business Bureau rating,” Rosenblum wrote.

AARP is only one of the many membership groups, publishers and charities that bombard consumers with letters or online communications. Their reasoning is that “sometimes, people don’t see it the first time,” said Ira S. Kalb, a marketing professor at the University of Southern California.

Still, Kalb said, an organization like AARP has to be careful not to seem cavalier or irresponsible. “If it’s to provide you with good service and it’s time to update, that’s the positive side. If they’re taking advantage of elderly people, it’s not good. … Their reputation is based on protecting the elderly.”

That’s where AARP has gone wrong, critics say. In a recent email, Portie told FairWarning that “AARP is supposed to be an organization that protects seniors from scams, but I feel it’s hypocritical when they practice such questionable marketing tactics themselves.”

Asked in a phone interview how often she gets renewal pitches, Glaspy said “too often,” and laughed. “I got another one just the other day telling me it’s about to expire – and I’m waiting for them to say it has and I’m going to … ask them which one, because there are just too many.”

Once known as the American Association of Retired Persons, and still mostly focused on members age 50 or older, AARP is a giant among membership groups. It also wields clout in Washington and in states across the nation. The annual $16 membership charge provides subscriptions to the organization’s magazine and newsletter as well as shopping discounts.

AARP declined to say how many people might have inadvertently paid for multiple memberships. (Full disclosure: My wife and I recently discovered that we have had two dual memberships for several years. We recently received multiple warnings that one was about to expire, even though we paid for a five-year renewal on the other membership last June.)

AARP’s January Facebook post warning people that their memberships were about to expire brought a flurry of protests. While AARP says its renewal alerts on Facebook begin 60 days before memberships are due to expire, many of those who complained said they had been inundated by AARP’s mailed notices far earlier.

This AARP post on Facebook in January triggered a burst of criticism from consumers who complained about the “Your membership is about to expire” wording. One AARP member, Kathy Portie, replied, “No it’s not. It is valid through 2020. So stop it.”

“You obviously have my address where you send a half dozen prods, requests, orders. And postage is not a problem for you,” responded Agnes Schaefer of Livingston, Mont., on Facebook.

“I’m 92 and never know if I will make it through to the next year. However, after six months, I start getting mail saying my membership is about to expire,” Schaefer explained in a phone interview. “You can write and ask them not to and you’re completely ignored. I’m furious with those people.”

Another member, Carol Rosenblatt, a former financial specialist from San Antonio, Texas, wrote that she and her husband “have really enjoyed our membership, but we have NOT enjoyed the tremendous amount of mail you guys had been sending us for the last 6 months! We really don’t need 2 renewal reminders a week, 6 months early.”

Even though it gives AARP its highest rating, the Better Business Bureau reports receiving more than 400 complaints over the last three years, with roughly 40 percent concerning excessive mailings or similar membership issues. The BBB said its grading formula takes into account such factors as the number of complaints, the size of the enterprise and its responsiveness.

When it comes to questionable marketing tactics by others, AARP takes a firm stance. In its mission statement, AARP describes itself as a “social welfare organization” that “fights for the issues that matter most to families — such as health care, employment and income security, and protection from financial abuse.” AARP’s publications over the past year have warned readers about “holiday shopping scams” as well as crooked car repair shops and technical support services.

AARP officials have also testified in Congress about misleading mailings that target seniors.

“The Association has had a longstanding interest in the issue from both the legislative and consumer perspectives,” declared then-AARP board member Betty Severyn, at a 2001 hearing before the Subcommittee on Social Security of the House Ways and Means Committee.

“Many of these mailings exploit the sensitivities and vulnerabilities of older Americans, their faith in the government, and their concern about finances,” said Severyn, who died earlier this year. “AARP believes that all citizens should be educated about and receive adequate protection from fraudulent, deceptive and misleading mail.”

Clarification: An earlier version of this story did not mention that AARP membership cards include expiration dates.

This story was produced by FairWarning (www.fairwarning.org), a nonprofit news organization based in Pasadena, California, that focuses on public health, consumer and environmental issues.