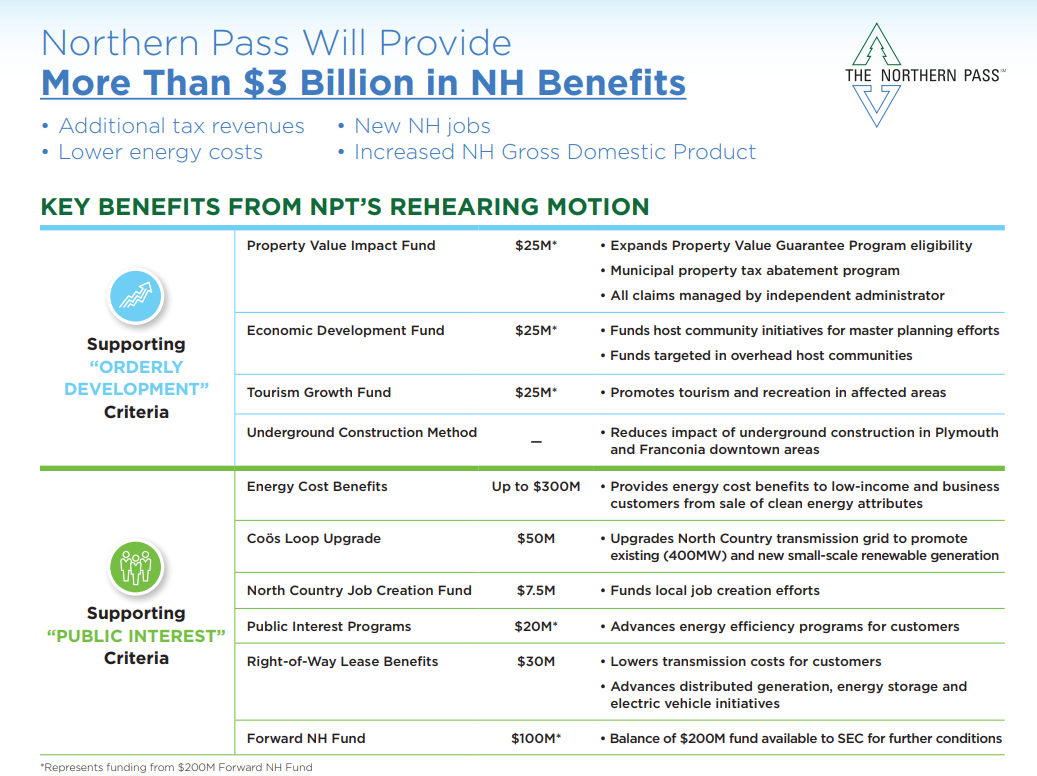 Screen shot of the information released by Northern Pass on Wednesday.

Northern Pass held a news conference Wednesday detailing its “comprehensive solution” and the motion it filed asking state regulators to void their Feb. 1 denial and continue deliberating the proposed 192-mile transmission line from Pittsburg to Deerfield.

In the motion filed with the Site Evaluation Committee, Northern Pass argued the SEC violated the law and its own rules by shutting down deliberations after two and a half days.

The SEC failed to apply all of the criteria set out in the rules and to make each finding set out in the statute, failed to assess conditions that could be imposed to alleviate any concerns  and did not apply the required standard set for deciding whether it would interfere with orderly development of the region, the motion said.

Northern Pass NH President William Quinlan outlined a host of commitments the company is willing to guarantee, including $25 million to help promote tourism in affected areas, and a fund to help make whole any homeowner whose property was devalued for being 200 feet from the right of way.

Quinlan said the solutions proposed would act as a “road map of the commitments the company is willing to make” for members of the Site Evaluation Committee.

There are 75 conditions the company is willing to make that the SEC could adopt as a constructive solution, Quinlan said.

He said there would be a “large fund” to guarantee to any landowners within 200 feet of the right of way.

“We will make them whole,” Quinlan said. “That’s a pretty creative way to address this issue. We’ve never done that before.”

Jack Savage of the Society for the Protection of New Hampshire Forests said:

“While the Forest Society respects the fact that Eversource has a right to appeal the unanimous decision to deny Northern Pass a permit, today’s filing does not appear to have anything new. The conditions Northern Pass says they agree to today were on the table previously for the SEC to take into consideration. They simply want a do-over.

“The problems with the Northern Pass proposal that led to the SEC denial are fundamental. The route they have chosen—creating new ROW through scenic northern New Hampshire, using inappropriate local roads, the scope and scale of a high-voltage transmission line on existing ROW that was never designed for it—-unduly interferes with the orderly development of the region. They failed to meet the burden of proof on multiple counts. Their witnesses were not deemed credible. The SEC appropriately took into consideration the views of 22 intervening communities that opposed the project. None of this can be remedied by giving away money,” Savage said.

Supporters of the project including members of the IBEW, Franklin Police Chief David Goldstein, Jim Roche president of the Business and Industry Association, along with others, spoke to reporters in Manchester and by telephone.

According to a news release issued by Eversource, “The motion outlines a comprehensive set of commitments that could provide the basis for granting conditional approval.”

It quoted Quinlan as saying: “We appreciate the time and effort invested by the SEC members in reviewing Northern Pass.

“Given the urgent need for cleaner, more affordable energy in the region, it is important that we present for consideration a solution that addresses the legitimate concerns raised during deliberations. We are hopeful that the SEC will focus on the comprehensive set of commitments that would establish a constructive path toward a resolution.”

The news release included the following:

In its original SEC application, Northern Pass contemplated the need to further economic development, tourism, community investment and clean energy innovation, and these are the four focus areas for its $200 million Forward NH Fund. Key commitments highlighted in today’s motion include the following specific allocations from the Fund:

What is at Stake for New Hampshire and the Region

Northern Pass stands to provide $3 billion in economic and environmental benefits to New Hampshire. Benefits include:

A reduction in regional carbon emissions by more than 3 million tons per year.