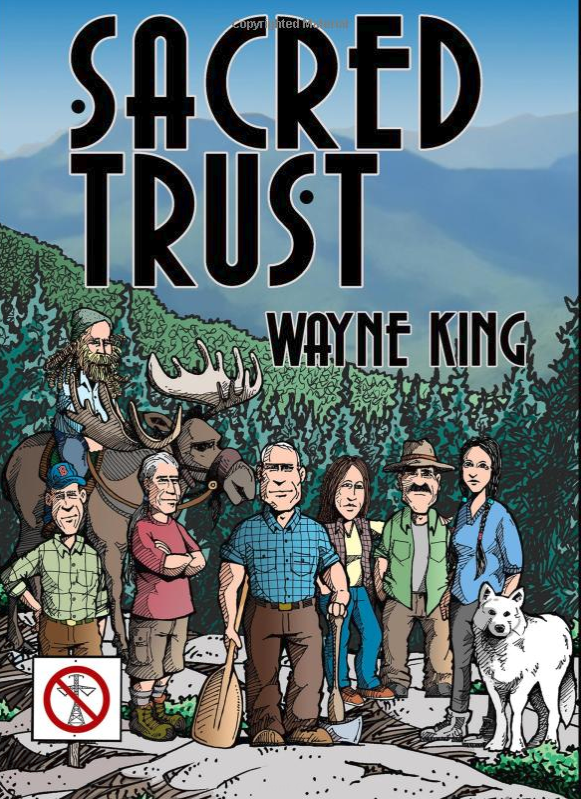 If the cover of “Sacred Trust,” created by editorial cartoonist Mike Marland, doesn’t clue you in, it won’t take long to realize that this novel is written as a vicarious
homage to New Hampshire’s own ongoing battle over the controversial
“Northern Pass” project and other similar projects.

Author, former state senator and 1994 Democratic gubernatorial nominee
Wayne D. King adroitly weaves a story with a familiar ring . . . the clash
of ordinary people confronting money and power in an epic battle to protect
the land they love.

“Sacred Trust” is the tale of a rollicking campaign of civil disobedience
against a private powerline, pitting nine unlikely environmental patriots,
calling themselves “The Trust,” against the “Granite Skyway” transmission
line and its powerful, well-connected consortium of investors. 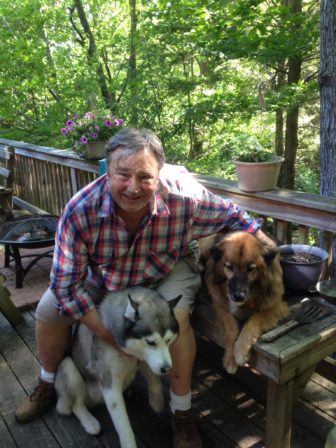 Former state Sen. Wayne King of Rumney has written ‘Sacred Trust,’ a fictionalized account of a battle to stop a powerline project. He is pictured with his dogs Anni and Boof.

With an obvious deep fondness for both the people and the land, King weaves
a fast-paced tale filled with both real and fictional stories from the
political world and life in the Granite State.  In a rich tableau that
includes sometimes hilarious and sometimes hair-raising stories of Senators
driving North in a Southbound Interstate lane after a night of drinking at
the Highway Hotel; Doctors sneaking a pregnant Llama into a hospital
surgical ward for ACL surgery; A bear and a boy eating from the same
blueberry patch atop Mount Cardigan as his father, the Ranger, watches
helplessly from the firetower, and more.

Among the heroes of the story is Sasha Brandt, an Iroquois woman from
Canada. While hiking the Mahoosuc Range of the Appalachian Trail with her
companion – a wolf named Cochise – Brandt meets Daniel Roy, a New Hampshire
“boy” and now a guide and outdoorsman. After a unique first encounter they
continue their trip together, eventually finding themselves camping with an
unusual assortment of people including a former Olympic paddler, a
conservative deer farmer, a retired spook, sidelined when he became the
first US victim of Lyme disease; and an iconoclast and former Army Ranger
named Thomas who lives in multiple backwoods abodes in the Great North
Woods and rides a moose named Metallak – aptly named for the “Lone Survivor
of the Megalloway” tribe, who in the late 1800’s was reputed to ride a
moose himself.

The group quickly discovers that – despite their very broad range of
ideological beliefs – they are united in their deep concern about the
Consortium’s proposal to bisect the most beautiful parts of the state with
massive 150 foot towers and clear cut forests for the sole purpose of
transporting electricity from Canada to more affluent markets beyond its
borders.  Like Oligarchs of the Gilded Age who minimized their costs by
creating a legacy of polluted land and water, these modern Oligarchs stand
to reap 100% of the benefits while passing off a large portion of their
costs through the generations-long visual pollution of the public commons
and all the economic shockwaves that result.

Determined to do more than shuffle papers and employ lawyers, the
compatriots form a band of brothers and sisters – along with Cochise and
Metallak. Armed with only their wits and a lot of heart they embark on a
rollicking campaign of civil disobedience that would make Thoreau and Dr.
King proud.

Although “Sacred Trust” is a work of fiction, King says that educators will
find the novel a great classroom resource as well. Adding a new dimension
and lively discussion to classes on the emergence of the renewable energy
era, sustainability, and the American tradition of protest and its place in
an “Era of Terrorism.”

In the coming “Age of Electricity”  King says, “a principal battleground
will be over who controls the production and distribution of electric
power. Across America today, the battle lines are being drawn. Utility
companies, many in an existential battle for survival, are pitted against
advocates of a new distributed energy paradigm where small, renewable power
sources replace today’s large electricity generation plants.”

“Most Americans” King asserts, “notice that things are changing, but have
yet to fully grasp what a sea change in life it will be for every American.”

“Sacred Trust” follows the trail of heroic citizens banding together to
stop one especially egregious powerline. The citizens who stand to lose
most are dead set against the project . . . but the political winds are
against them. It is in this setting The Trust takes on the Consortium.

As the actions of The Trust gain traction and momentum, other citizens join
in support including a wave of supporters on social media; “The
Gazetteers,” a group of citizen activists writing in the style of the
Federalist Papers; and journalists including one business writer who weaves
together details of the historic record leading his readers through a
virtual primer on the evolution of a post-carbon energy paradigm beginning
with the 1972 election of Jimmy Carter and the passage of the National
Energy Policy Act into which NH Senator John Durkin inserted an eight word
amendment that rocked the world.

“Sacred Trust” is a hilarious and vicarious, high voltage campaign to stop
the “Granite Skyway” leading the reader through the hijinks of The Trust,
and the series of choices we all are currently confronted in the emerging
“Age of Electricity.”

For each of the members of The Trust it is a sacred campaign fought against
an impending legacy of steel towers and scarred lands – an existential
threat to an entire way of life. The Trust is all that stands between the
people and their worst fears . . . and they are willing to pay any price to
prevail.