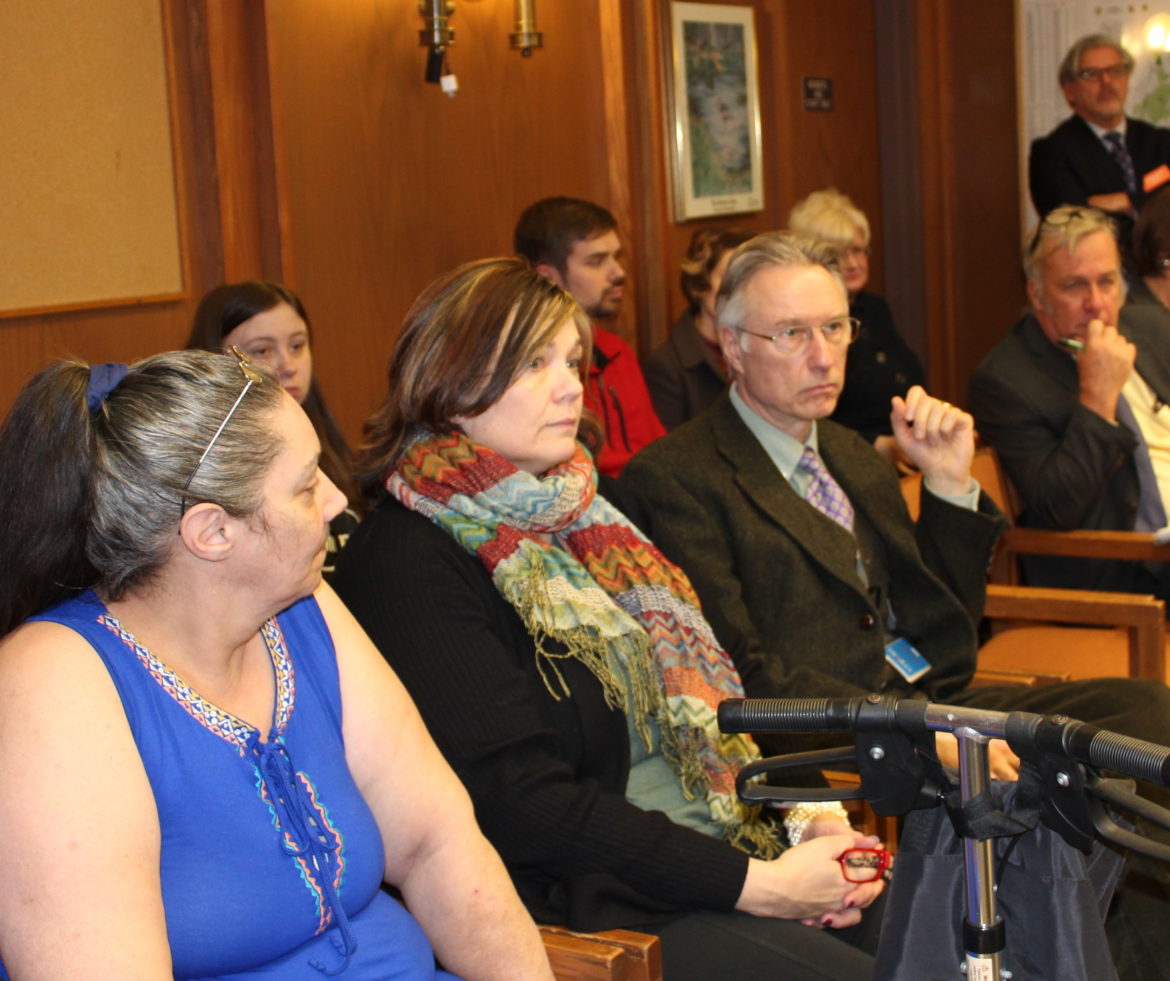 CONCORD — Two mothers told lawmakers their daughters are harassed, humiliated, and sometimes “locked down” at the Secure Psychiatric Unit at the New Hampshire Prison for Men, and a former patient recounted nearly dying as his pleas for emergency medical care were ignored.

The Secure Psychiatric Unit has stirred controversy because mentally ill people are held there if they haven’t committed a crime, but are considered too dangerous to be housed at the New Hampshire Hospital for the mentally ill.

At SPU, civilly committed patients who were found not guilty by reason of insanity and not competent to stand trial are commingled with convicted criminals who are mentally ill in a 60-bed unit on the grounds of the men’s prison. Presently, three women and one person who is transitioning from male to female, are housed in the unit on the prison campus with about 1,400 men.

“My daughter has been in SPU (Secure Psychiatric Unit) for three years,” said Cindy Glazier. “I can visit on weekends. That’s it. It’s a prison setting, not a psychiatric unit. It’s not for patients. She’s treated like a prisoner and it’s not set up as a hospital.”

Glazier’s daughter, Patina Welch, pleaded not guilty by reason of insanity in 2015 to jumping out a second-story window in Lyman holding her 4-month-old boy-girl twins, killing her son and injuring her daughter the summer before. Welch told police she was trying to save them from armed intruders.

The prosecutor at the time said there was clear and convincing evidence that Welch suffered from a mental disease or defect. Welch was diagnosed with schizoaffective disorder, bipolar disorder, post-traumatic stress disorder and personality disorder.

What started as a legislative subcommittee work session Wednesday on a bill to require outside review of the Secure Psychiatric Unit by the Joint Commission that accredits psychiatric hospitals quickly drew passionate comments from family members and advocates who attended. They say the patients are denied their constitutional rights and human dignity.

House Bill 1565, which was submitted by Rep. Renny Cushing, D-Hampton, would require the corrections commissioner to seek Joint Commission accreditation for SPU as a psychiatric hospital.

The bill is less than ideal, according to the subcommittee, but the three-member panel supported the idea of requiring accreditation as at least a beginning, a way to get some sort of oversight for the facility.

Reps. Kris Schultz, D-Concord and Ray Gagnon, D-Claremont, are members of the executive departments and administration committee and Carol McGuire, R-Epsom is its chairman. They agreed the bill involves important human rights issues and plan to support it to the full committee on Tuesday. Chairman McGuire also promised they will tour SPU where she hopes to talk with patients. 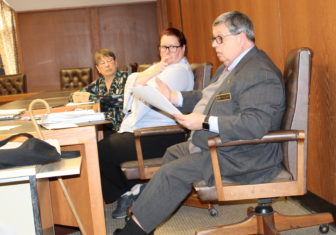 Members of the subcommittee of the executive departments and administration committee from left are Reps. Carol McGuire, R-Epsom, Kris Schultz, D-Concord and Ray Gagnon, D-Claremont.

Rep. Schultz took note of the fact that the legislature has failed to stop the practice of locking up non-convicted people in a prison in the past.

“It would be ideal to have a separate facility,” Schultz said, “but that’s not what this bill addresses. This is a human rights issue.”

Glazier said her daughter’s son can’t visit his mom at SPU because his therapist said it would be too much for him. Glazier and other advocates agreed that children are not welcome at the unit. Glazier made a point of saying her daughter is literally in a men’s prison, but isn’t allowed the same privileges as the men.

Her daughter Patina Welch gets her exercise by pacing the hallway, and she spends a lot of time sleeping because there is nothing else for her to do, Glazier said. The prison doesn’t offer mental health classes or arts and crafts, Glazier said.

As someone who has been civilly committed, Welch hasn’t been convicted of a crime. It will be up to a judge to determine if Welch, who had suffered from mental illness from the time she was a teenager, should be released to a less secure setting when she is no longer a danger to herself or others.

Peggy Starr said her daughter, Christina Thomas, was brought to SPU more recently after being held at the MCI-Framingham in Massachusetts for three years. “She had no idea why and was put in lockdown for 23 hours a day,” Starr said.

Thomas told her mother that she made good progress in Framingham participating in seven to 12 hours of programming a week, but that was all destroyed in just two months at SPU where similar programs are not available.

Thomas told her mother: “I don’t want to be alive. I cannot live like this anymore.”

When women are on suicide watch, they wear a “turtle suit” held together with Velcro and do not receive feminine hygiene products, Starr said. Women get one roll of toilet paper a week. Large-breasted women who don’t like the fit of the prison-issued sports bras are told to go without, she said.

“They are still visible to the men and walking around without a bra bothers them terribly,” Starr said. “They get made fun of by male prisoners.”

Thomas was found guilty four years ago and sentenced to serve from 10 to 30 years for first-degree assault of a six-year-old boy who along with his mother, was staying in her home. Prosecutors convinced a jury that Thomas withheld food from the child and forced him to stay at times in a dog cage.

Starr said the women patients can use the weight room twice a week, but there are usually no female guards to take them. And when the women go outside, it is to a roofed area where they walk on concrete.

Before the meeting started, Wanda Duryea, co-founder with Beatrice Coulter, of the Advocates for Ethical Mental Health Treatment, said she had verified that a woman with developmental disabilities has been held at SPU for almost 30 years.

The unit has 60 beds, but is usually only a little more than half-filled, according to Paula Mattis, director of Medical and Forensic Services at the New Hampshire Department of Corrections, who was present at the meeting, but didn’t respond to the allegations from families and advocates.

After the meeting, Mattis refused to respond to questions from InDepthNH.org and on Thursday, the Department of Corrections didn’t respond when asked again to respond to the allegations of mistreatment.

Mattis did respond to questions from the subcommittee centered around finding the appropriate oversight commission. She said the department would embrace seeking certification.

Beatrice Coulter told the subcommittee New Hampshire is unique in commingling the various groups having only mental illness in common in a state prison.

“We are one of the very few states that puts away people in prison absent adjudication. New Hampshire in many ways has become a Banana Republic,” said Coulter, a registered nurse who was hired by SPU, but quit after only a few days because she opposed housing people who hadn’t committed a crime there.

Eric Largy, 51, was held at SPU for more than five years after awaiting trial in Hillsborough County Jail for two years. At the state’s insistence, he was deemed not competent to stand trial for assault and kidnapping in the alleged 2009 beating of his father, Clifton Largy, the retired police chief of Nashua.

Largy has become an outspoken critic of SPU and the process that he believes deprived him of his right to defend himself at trial.

“I was denied medical care from 7 at night until 7 in the morning while having an aortic dissection. I was med-flighted to Dartmouth-Hitchcock the next day,” Largy told the subcommittee.

He wanted to know how much money is wasted by waiting until patients are in medical crisis before treating them.

Dartmouth medical personnel said SPU couldn’t be trusted  to administer the drug Coumadin so they sent him back to the prison after recovering from surgery on aspirin, he said.

“On any given day, there are two or three people from SPU in the hospital because of the lack of primary care,” Largy said.

Shelly Raza said her son Corey Peterson was housed at SPU for two years making no progress, but when he was finally returned to the New Hampshire Hospital, he was well enough to be released to a group home in only two weeks.

“My son was transferred a couple of times to the hospital because they didn’t take care of him (at SPU),” Raza told the subcommittee.

Rep. Cushing said he hopes his legislation will at least shine light on the problems at SPU.

“I am optimistic,” Cushing said.