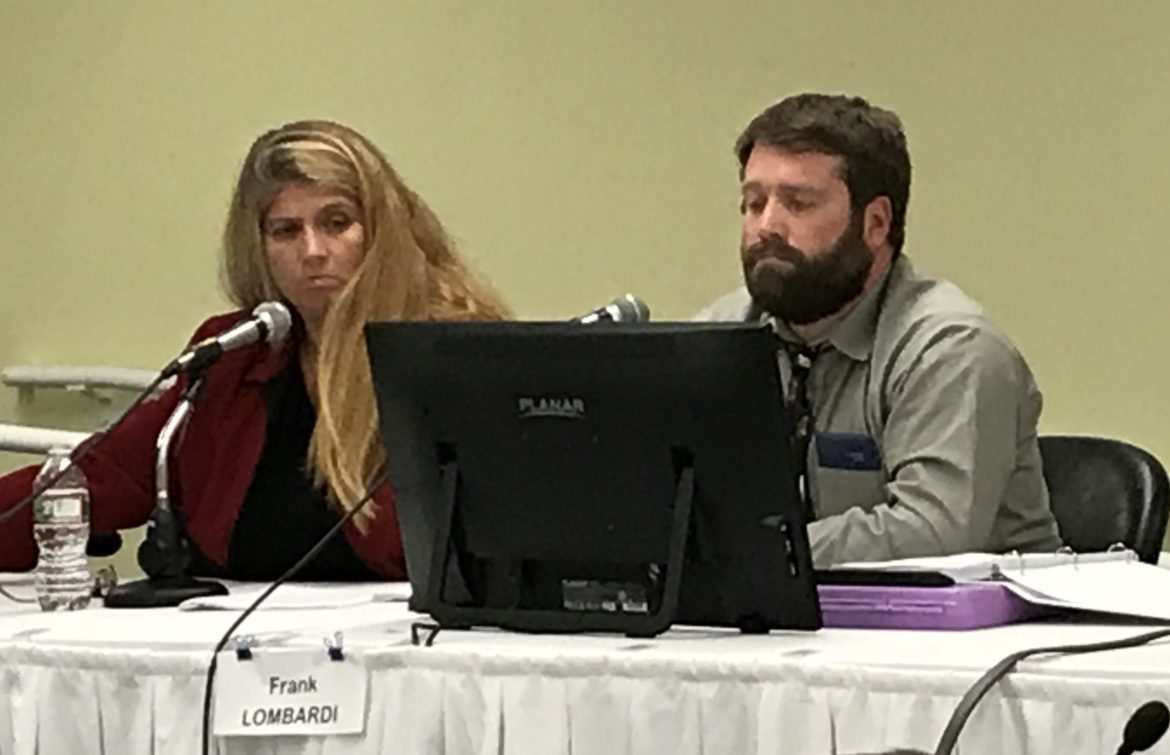 But on Tuesday, town officials from Whitefield and Sugar Hill said the five agreements Northern Pass secured with communities have no teeth and do little to address other concerns about the $1.6 billion project that stretches from Pittsburg to Deerfield.

“The draft does not address a lot of the town’s concerns,” said Whitefield Select Board Chair Wendy Hersom at Tuesday’s Site Evaluation Committee’s adjudicative hearing on the project. “The project says ‘We’ll address what we want to address, but not what the town wants addressed.’ And there are no teeth and that’s a problem.”

Attorney Jeremy Walker, representing Northern Pass, said the project proposed a draft construction memorandum of understanding, and the town responded with a proposal, but has had no communication since July.

“The construction schedule is not our biggest issue,” Hersom said. “In the grand scheme of the project, that is not the town’s primary concern.”

Whitefield officials said they would like to see the project buried the 10.5 miles it runs through the town. Burying the project would preserve the scenic vistas along all the major roads leading into the town’s center, they said.

Northern Pass would use an existing utility right-of-way with mostly wooden poles below the tree line, but the new large steel towers would be visible above tree line and along the main roads in and out of town, Hersom said.

Whitefield’s economy is largely dependent on tourism with the Mountain View Grand Hotel, inns, restaurants, helicopter rides from the airport, art galleries and the Weathervane Theater, she said.

The town common is at the bottom of three hills carrying the three major roads, Hersom said, and less than half a mile from the transmission line.

“There are some beautiful views,” she said, “but it is not the same effect with giant power lines.”

She said the town is also concerned about the effect construction will have on wildlife, the flow and quality of ground water and the environment.

Under the Site Evaluation Committee statute and rules, a utility project does not have to seek local approval or meet local regulations and ordinances, although Eversource officials have said they will do their best to follow local ordinances without seeking local approval.

“As a planning board member, the code we have had for 25 years, flatly prohibits this project,” said Frank Lombardi. “If the goal is to do it properly as proposed, multiple criteria are not satisfied.”

The town is concerned about a $10.5 million upgrade to its water system, Hersom said, with construction expected to begin next summer.

The system is old with fragile clay pipes and construction for the line would be very close to the system, she noted.

Walker, as Northern Pass attorneys have done with local officials, touted the estimated increase in the community’s tax base and what the first-year property tax payment would be.

He showed Whitefield officials the top 10 assessed properties, and said the project’s assessment would be three times more.

But Hersom disagreed with the top 10 assessed properties list noting one is a hospital, another a bio-mass generation plant and neither are assessed property taxes, although they make payments in lieu of taxes.

And she said the town disagrees with the method Northern Pass’s expert use to determine its valuation. She noted the project’s tax payments will change over time, and in the long term its value will be zero using that method.

Walker took issue with Hersom’s testimony that any additional revenue from Northern Pass would be offset by abatement requests from homeowners near the transmission line. He said the project’s expert believes no evidence suggests the transmission line would diminish property values.

Hersom said Walker was talking about the first year, but longer term the abatements would outweigh tax revenues.

The town did not spend thousands of dollars to hire an expert like Northern Pass did, she said, but common sense says a hotel room with an ocean view costs more than one looking at a parking lot.

“We have all heard about the view tax in New Hampshire,” Hersom said, “a house with a pristine view is certainly assessed more than one with a view of the dump.”

Margaret Connors, a member of Sugar Hill’s Select Board, expressed similar concerns about the buried section of line through her community.

The Department of Transportation closed a major road — Route 18 — this summer to replace a bridge, she said, along the same route Northern Pass would follow.

The impact to Heath’s Greenhouse and Nursery had a greater impact than expected as it lost drive-by traffic, Connors said.

The experience raised her concerns, she said. “I am much more concerned because of the hue and cry (over the project),” Connors said, “and how much more dramatic it would be.”

She said there are five to seven businesses in the area that would be hurt by construction.

The town’s two schools could also experience traffic delays not only during the school year, but with their year-round use.

Connors also expressed concerns about water quality in Coffin Pond and the Gale River which are adjacent to the buried line.

Counsel for the Public Christopher Aslin noted the amount of work that will be done — splice vaults, horizontal directional drilling and road crossing — and asked if the town and applicant had discussed developing a work schedule or sequencing.

Connors said they had not. There is no definitive route, she said.

”At this point, there is such opposition to the project, I hope it will not be built,” Connors said. “Originally when we thought it would be under the road, we were not so upset, but now it is under the side of road along the river and private property.”

A warrant article opposing the project passed at the 2011 town meeting when an overhead line was planned, and the town has since voted to establish a Northern Pass defense fund.

“The town is 100 percent opposed to the project underground,” Connors said. “That has not changed at all.”

Attorney Barry Needleman, representing Northern Pass, said while the select board may not want to address its concerns with the applicant, one selectman, Richard Bielefield, has written the project specifically about the tax impact and Northern Pass has responded.

Needleman noted other towns have construction memorandum of understandings that would address many of the issues Connors raised, but the board decided not to engage in a discussion.

Connor said the board was not ready to enter a discussion and is not now, noting the language in the agreements with other communities is not binding.

“We don’t trust Northern Pass and will not form any agreement before it’s approved,” she said. “We do not want to give any indication we favor approval.”

Needleman said the project’s expert estimates the 1.7 mile section of buried line would be valued at $16 million and be 9.8 percent of the town’s property tax base.

Revenue is always helpful Connors said, but does not account for expected property tax abatements.

“We have no idea what would happen close to river and on private property,” Connors said .”It is not worth it to us. We’re against the project.”

Adjudicative hearings will continue Thursday with what is expected to be the last testimony before the Site Evaluation Committee, which is expected to close the record Friday afternoon.

The Site Evaluation Committee will begin deliberations on the project at the end of January and will issue an opinion by the end of February.