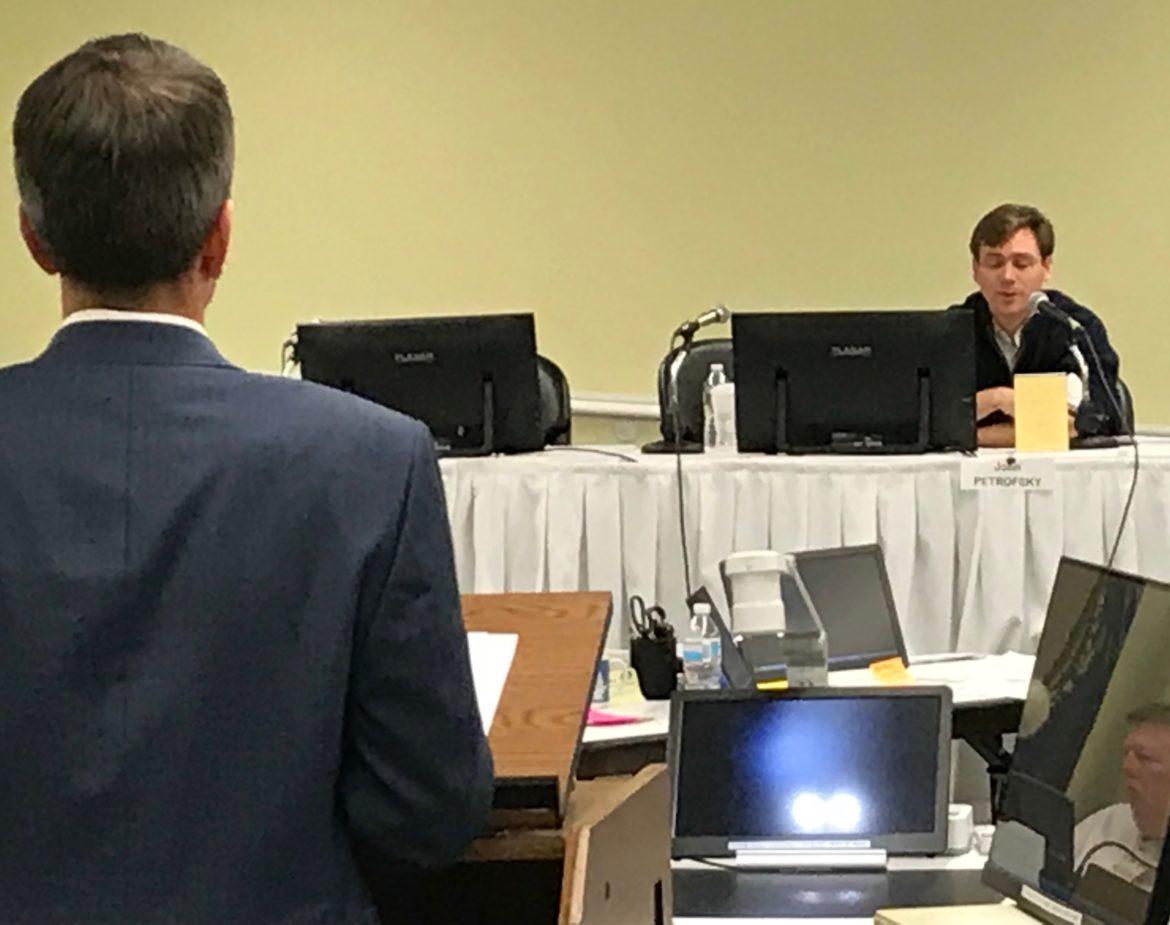 Attorney Jeremy Walker, representing Northern Pass, questions John Petrofsky, who grew up in Stewartstown and now lives in Washington, DC at Thursday’s adjudicative hearing before the Site Evaluation Committee on the project.

CONCORD — With Hydro-Quebec’s agreement to bury 11 miles of the Northern Pass transmission line in Canada, so should the line through the 40 miles of new right-of-way in the North Country, the Site Evaluation Committee was told Thursday.

The projected cost of burying the 11 miles in Canada would project to be $4.2 million a mile in U.S. dollars, said John Petrofsky who grew up in Stewartstown, owns property there but lives in Washington DC.

“That’s a lower number than we’ve seen before. It would be worth looking at,” he said at the adjudicative hearing on the project. “Eight years ago, it was new technology, It is not today, there’s been a learning curve.”

He referred to an Environmental Protection Agency letter to the US Army Corps of Engineers saying burying the line along the pre-approved route would be less damaging to wetlands and wildlife and “appears practicable.”

“Burying the line would address most of what I brought up in pre-filed testimony,” Petrofsky said. “The tax benefits and money spent in New Hampshire would actually be higher.”

About eight miles of the transmission line will be buried in the new 40-mile, far northern section of the $1.6 billion, 192-mile line to bring 1,090 megawatts of Hydro-Quebec electricity to New England.

Northern Pass said burying more of the line in the 40-mile section or in other sections of the proposed route would make the project economically unfeasible.

A total of 60 miles will be buried including 52 miles from Bethlehem to Bridgewater including through the White Mountain National Forest.

But attorney Jeremy Walker representing Northern Pass questioned whether Petrofsky had done enough research to make the claim it would be economically feasible to bury the line for the 40-mile stretch, noting Petrofsky’s expertise is in finance not engineering.

Where would the line be buried in Canada, Walker asked, and Petrofsky said along shoulders of roads as the EPA had proposed in the northern New Hampshire section.

Walker asked if Petrofsky knew if there would be any horizontal directional drilling in the Canadian section and he said no.

“So you have no basis for your opinion,” Walker said, “but just your assumptions.”
Petrofsky said he assumed it would be similar to the terrain it connects with in Northern New Hampshire.

Petrofsky also was concerned the project would have a negative impact on the Cohas Trail which covers 170 miles through Coos County.

“It’s remote and pristine,” he said. “When you are on the trail you can still feel like you’re getting away from everything.”

He said the proposed transmission station in Stewartstown and the project’s towers will be visible from the trail in a number of places.

“I focused on the trail because it’s something I know,” Petrofsky said. “I’m a member of the association and I helped build part of it.”

He said it helps the North Country economy and the project would change people’s experiences as they hike the trail.

The committee also heard from North Country landowners opposing the project, as well as others who do not abut the transmission line, but who believe the project will adversely impact their views, as well as members of the Pemigewasset River Local Advisory Committee.

Witnesses are scheduled to testify before the committee through Tuesday and possibly into Thursday with remaining dates used to review exhibits submitted by the applicants and intervenors.

Intervenor legal briefs have to be filled by Jan. 12 and the developer’s briefs by Jan. 19.

The committee begins public deliberations Jan. 30 and continues through the end of February when it must make a decision.