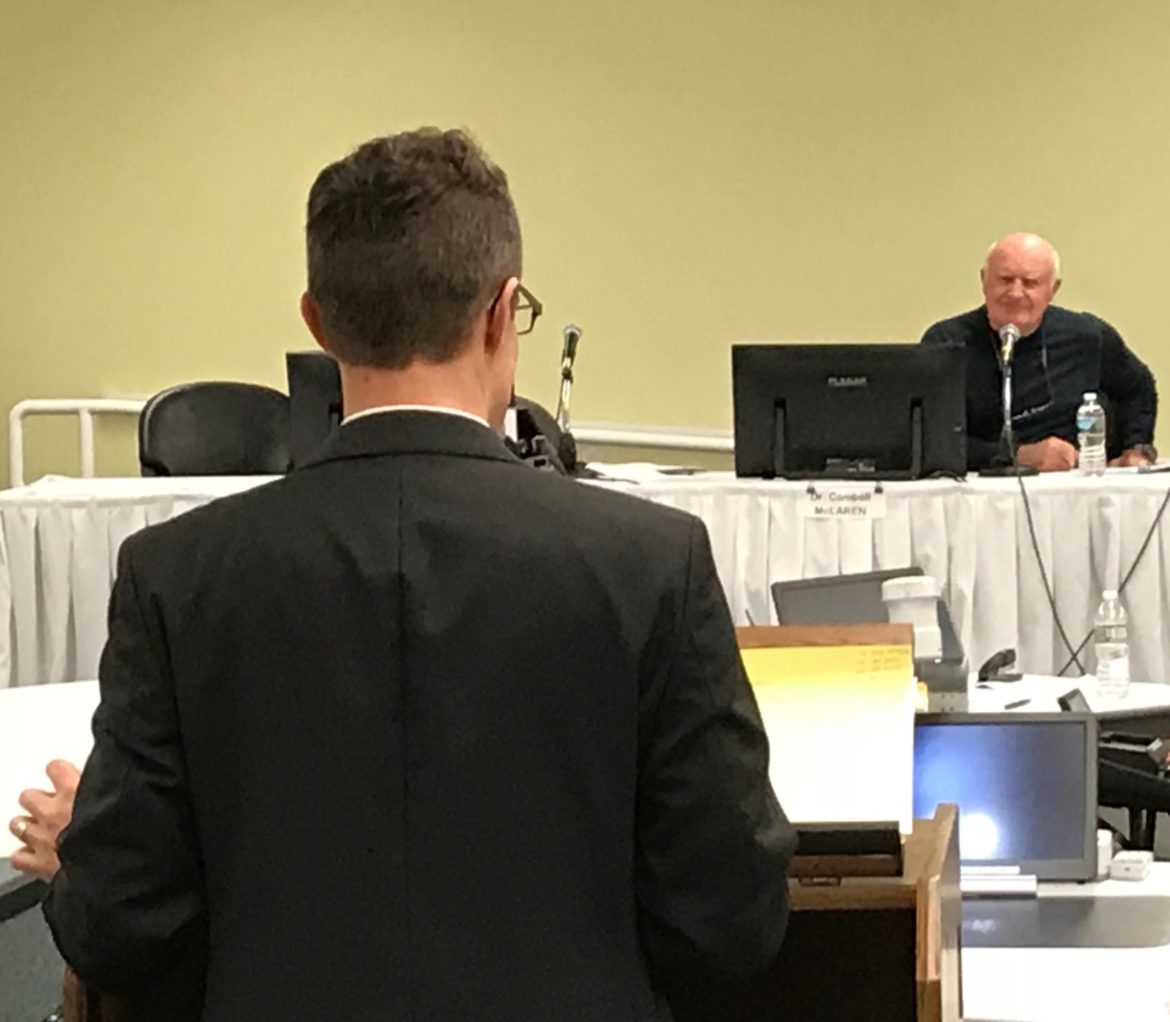 Dr. Campbell McLaren expresses his concern about road closures in his community in Easton to Counsel to the Public Christopher Aslin for the Northern Pass Transmission project. McLaren appeared during Tuesday's Northern Pass adjudicative hearing before the Site Evaluation Committee.

The negative impact to property values with views would offset additional revenue from the project, he maintains.

New Hampton has properties that are assessed a view factor (view tax) in determining their property assessment, Irvine said.

“If their viewshed is affected, I anticipate they will want to have the view factor removed from their assessment,” he said. “A certain amount of taxable value could be reduced.”

Irvine estimated the reduction would be from 10 to 50 percent depending on the site.

The expert hired by project developer Eversource found there would be little to no impact on property values, with the greatest impact on properties bisected by the utility right-of-way and diminishing the greater the distance from the transmission line.

Irvine and other town officials said the project violates the town’s master plan and could not be approved under local ordinances and rules.

“This is a very different animal than the transmission lines there now,” said Planning Board chairman Kenneth Kettenring, noting site plan ordinances cover changes of use which Northern Pass would be.

And, he said, the ordinances require transmission lines be buried if possible. “We don’t want something high blocking our views.”

Irvine said a master plan reflects the social and economic values of a community. He said while the master plan does not specifically mention high-voltage transmission lines, that is not an endorsement of that type of development.

Northern Pass consultant and former Department of Environmental Services Commissioner Robert Varney testified earlier that the project did not violate the town’s master plan because high-voltage transmission lines are not mentioned.

The utility project evaluation process allows the Site Evaluation Committee to determine if the project is in the public’s interest bypassing the need for local approval.

New Hampton has opposed the project since 2011 when a resolution was adopted by the town. A 2016 petition signed by more than 700 people in opposition was presented to the Site Evaluation Committee.

Attorney Steven Whitley noted Northern Pass has touted its outreach efforts to towns and asked if the company had contacted the town about proposed changes including using a class six road to access construction roads within the existing right-of-way.

Irvine said the company had not and Whitley asked if the lack of contact would impact a possible future agreement with Northern Pass.

Irvine said he would be uncomfortable. “Nothing is set in stone, everything is very fluid with the way it’s presented for approval,” he said. “We’re asked to enter an agreement when we don’t know specifics and that makes us uneasy.”

Whitley noted Northern Pass testified it seeks memorandum of agreements with towns to resolve community concerns and asked if the town had discussions with the company.

Irvine said they had a meeting in May but again the town was concerned about the lack of specifics.

“Let’s go back to road conditions. Who would be the decision maker to the degree of damage and how to compensate,”  Irvine said. The selectmen are willing to listen and continue talking, he said, but the company has made some unacceptable demands.

She noted Irvine cited the lack of specificity, but asked if the town had outlined its specific concerns to the company.

“If someone wants to come into town and disrupt and create scars and tells us how they will mitigate,” Irvine said, “it is not up to us to say if the mitigation is something we can live with. We like what we have.”

Room to work on the underground portion of the Northern Pass Transmission project from Bethlehem to Bridgewater could be at a premium, according to several landowners who also testified Tuesday.

Physician Campbell McLaren of Easton said a section of Route 116 near his home has a narrow right-of-way of 3 rods and the company plans to bury a splice vault in that area.

When the crane is in place to install the vault, there would not be enough room in the state right-of-way for a single line of traffic and the road would have to be closed, he said.

“That will happen up and down this road,” McLaren said, “and that is my concern as a physician.”

With someone with a heart attack or a child with a seizure, a quick response at a hospital is required, he said.

Bruce Ahern of Plymouth owns land on both sides of Route 3 where the underground section will be buried, He told a similar story about the small right-of-way.

He noted part of his barn is actually in the right-of-way but is grandfathered. Ahern also told the committee that recent requests to the Department of Transportation have incorrect information about the width of the right-of-way and do not show two houses in a construction zone for a horizontal directional drilling planned for the project.

The final eight adjudicative hearings on the $1.6 billion project stretching 192 miles from Pittsburg to Deerfield are scheduled to end before Christmas. Deliberative sessions are scheduled for January and February.

The next hearing will be Monday with three Easton residents testifying.